The 1960 Los Angeles Chargers played their first official game in franchise history on Saturday night, September 10, 1960, in the Los Angeles Coliseum before a crowd of 17,724. The team was behind 20-7 at the start of the 4th quarter, but rallied to win the game 21-20. The team struggled for the next 4 games, losing 3 out of 4, but then went 8-1 to finish atop the AFL West and earn a spot in the first AFL Championship Game with a 10-4 record. The largest crowd to "fill" the Coliseum that year was the 21,805 in attendance on November 13 to watch a match – up between the two best teams in the league, the Houston Oilers and the Chargers. It turned out to be a preview of the 1st AFL Championship game. The team clinched its Western Division Title and spot in the championship game, before an intimate gathering of 9,892 fans at home on December 10, 1960, by beating the Denver Broncos 41-33.

The Championship game, played on New Year’s Day of 1961, did not end well for the LA Chargers; they ended up on the short end of a 24-16 score against the Houston Oilers. Los Angeles was up 6-0 at the end of the 1st quarter, but had fallen behind 10-9 at the half. The teams traded TD’s in the 3rd quarter, but Houston took a commanding lead on an 88 yard pass from George Blanda* to Billy Cannon**. The Chargers were driving for a potential tying score (yes, the AFL allowed 2 point conversion attempts, which went by the wayside after the merger), but time expired with Chargers on the Houston 22 yard line.

The emphasis on the passing game could be seen in the team’s season stats: 441 passing attempts for 3,177 yards. That the passing game needed working out is seen in Jack Kemp’s 20 TD’s and 25 INT’s. Kemp also fumbled 9 times, but did add another 8 rushing TD’s. The penchant for interceptions seemed to be a league wide affliction; the Chargers’ defense recorded 28 picks that year. The INT rankings were 6th in the 8 team league for the offense and 3rd in the league for the defense. All in all, a pretty sweet season for DB’s. Kemp, RB Paul Lowe, and DB Dick Harris were AFL "All-Star" Selections (think Pro Bowl).

Just look at some of the INTs here!

The AFL Unearthed # 1 - Introduction (via TheAFLhistory)

Even before the loss in the AFL Championship game, played on New Years’ Day of 1961, rumors were swirling about the Los Angeles Chargers moving to San Diego. Legendary sports writer Jack Murphy wrote on December 21, 1960: "The story will be denied and I’ll probably be denounced as a third-rate fiction writer but it comes on excellent authority that the Los Angeles Charger franchise is San Diego’s for the asking." By the end of the season, Conrad Hilton badly wanted to leave LA. Despite living there, crowds ranging from less than 10,000 to 22,000 convinced him that "we’ve got to get out of Los Angeles. We can’t compete in the same market with the Rams." Reports from the AFL indicate that Hilton lost $900,000 in 1960 on his team. A decent home could be had for $10,000 in those days.

The City, for its part, wanted the recognition of having a major sports franchise call America’s Finest City home. At that time, San Diego was the 18th largest city in the US (in 2010 it was the 8th largest), but wanted recognition beyond being a remote military town. One sports executive at the time described San Diego as an "an airport tied to a submarine". Even the minor league Padres, with their own dreams of a major league franchise, were on board: "The Chargers will be good for baseball," said Padres executive Doug Giddings, "because they will awaken spectator sports in San Diego."

It also made good business sense. Hilton’s team was a million-dollar company with a player payroll of $385,000. Jack Murphy predicted that every dollar spent by the city for the Chargers would come back seven times.

The AFL had no objections. This move would actually fit in better with the AFL’s basic business model; putting football teams in cities that did not have an NFL team. The Chargers and the New York Titans (to be renamed the "Jets" after a move to Shea Stadium in the mid-60’s) were the only two teams out of the 8 team league that deliberately went against that business plan, but those teams were in the two largest cities bookending the coasts and the AFL went along. The Dallas Texans ownership (Lamar Hunt) did not envision having to compete against the NFL in Dallas, but the NFL deliberately put the Dallas Cowboys franchise opposite the Texans and to even out the franchise they had awarded to the prospective AFL franchise in Minnesota.

The AFL was not concerned so much with the size of the markets the teams called home, as the league was built on a fundamentally different business model than the NFL. The AFL instituted a 60% Home Team – 40% Visiting Team split of every game’s gate receipts. (The NFL operated on a home team keeps all system.) The AFL also signed a league – wide blanket TV broadcast contract with ABC for $10,625,000 prior to the start of the 1960 season; the revenue from this contract was evenly split among the 8 teams of the league. (The NFL had each team negotiate with local CBS affiliates for broadcast rights to its home game – CBS did broadcast the NFL Championship to each affiliate station.)

Two weeks after Jack Murphy’s editorial and 4 days after the AFL Championship game (January 5, 1961), Barron Hilton and Sid Gillman paid a visit to San Diego and Balboa Stadium. They were appalled by the conditions at the stadium. Sid Gillman later stated that the locker room was "A real hell-hole". The visiting team’s locker room was particularly sparse; it was a small space, dark, cold, and with no actual lockers. Visiting teams had to use baskets and coat hangers to store their clothes.

By the end of the visit Hilton said Chargers would relocate if the city would renovate the locker room and increase stadium seating to at least 30,000. Hilton also wanted a fan base that could provide season ticket sales of 20,000. The following week Coach Gillman and a team of engineers, architects and landscapers scoured the stadium to determine exactly what improvements the Chargers would request from the city. "If the club is going to be on television every week, Balboa Stadium has got to be made a showplace," said Gillman. 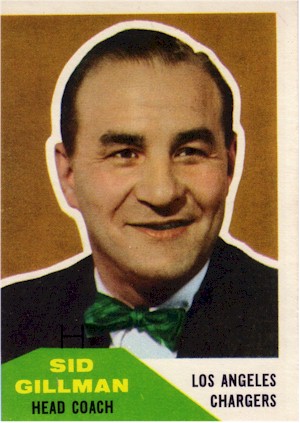 Barron Hilton personally presented the final proposal to the city council on January 24. With some dissent, the Chargers got the City to agree to renovate the locker room and add a second deck of seating to Balboa Stadium. The expansion would increase the stadiums capacity from 23,000 to 34,000. The cost was expected to be $700,000 and would be paid out of city operating funds. In return, the Chargers would pay no rent during the first season, pay rent of $2,000 for the second season, and 5% of the gross ticket sales every year after that.

The Los Angeles Chargers announced their move to San Diego on January 25, 1961.

The Chargers got off the longest quick kick in Civic Center history yesterday, booting themselves right out of apathetic Los Angeles and into eager, enthusiastic San Diego. -Jerry Magee, San Diego Union, January 25, 1961.

The five-year contract was signed on February 9. One week later the Chargers announced the ticket scale for the 1961 season. Premium sideline seats would go for $5, reserve seats outside that area would be $3, and general admission $2. Season tickets for seven league games were $35.

Work began on Balboa Stadium right away. Construction went on around the clock, with a view to finishing the upgrades to the facility before the start of the 1961 season. Some changes to the original plans resulted in delays and increased costs. The increased costs resulted in delays to other budgeted projects of low priority, such as libraries, police and fire stations, and Mission Bay improvements. The stadium was ready for the San Diego Chargers home opener on September 17, 1961 against the Raiders. 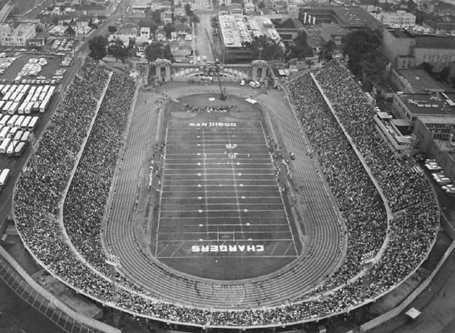 (Attribution: I am indebted to www.sandiegoyesterday.com as the source for much of this post.)

* Yes, that George Blanda. Already 33 years old, Blanda had retired from the Chicago Bears in 1958. He came into the AFL when Bud Adams reached out to him and promised him a shot at starting QB for the Oilers. After torturing the Chargers (and most of the AFL) as one of the league’s best Quarterbacks for Houston and Oakland during the 60’s, he later went on to become the oldest man to QB in a playoff game in 1971 at the age of 43. He played his last professional game in a playoff loss against the Steelers in January 1976 at the age of 48.

** Billy Cannon was the Heisman Trophy winner in 1959 and easily the most high profile signing of the new AFL in 1960. The Blanda to Cannon combination would prove lethal to the Eastern Division and the rest of the AFL in 1960 and 1961. Sid Gillman, after hearing some details of Cannon’s workout regimen at LSU, visited Baton Rouge after the 1962 season. This trip would result in the introduction of structured weightlifting and physical conditioning to professional football during the Chargers legendary 1963 training camp.