Our weekly poll of how Chargers fans feel Norv Turner is doing as the Chargers Head Coach. We've now begun to chart Norv's past approval ratings as well.

After being completely embarrassed by the Atlanta Falcons last week, the Chargers extended the favor and embarrassed the Kansas City Chiefs. Norv Turner and Defensive Coordinator John Pagano had a plan of attack against the Chiefs and the team executed beautifully.

It's not all puppies and sunshine however: the team failed to get anything going on offense during the entire 3rd quarter. and both Dwayne Bowe and Jamaal Charles found ways to torch the defense. So, it wasn't a perfect showing by the Chargers this week, but they were dominant and capitalized when it mattered. 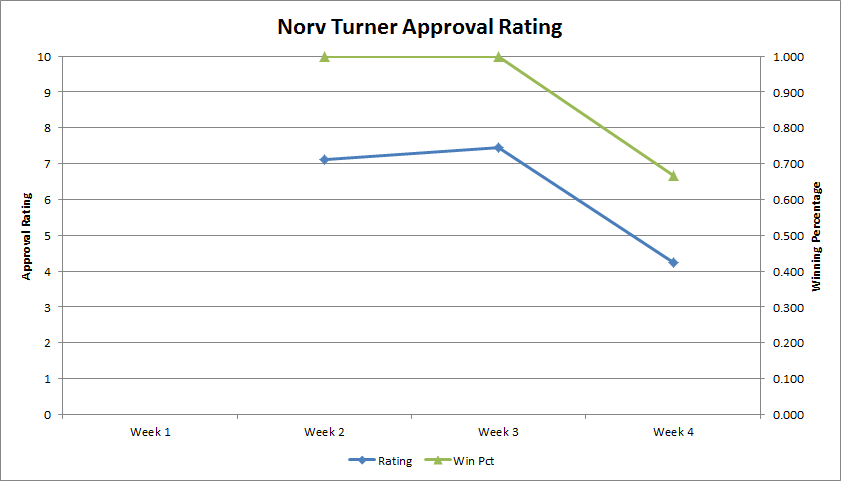 Kind of interesting how the Norv's approval rating exactly follows the Chargers Win Percentage slope. In A.J. Smith's approval rating poll, his downward slope was a bit less steep than Norv's. Then again, the Head Coach generally has more effect on a team's performance week-in and week-out than the General Manager.

Regardless, how do you think Norv is doing as the Chargers Head Coach this season? Vote in the poll below and sound off in the comments!