Our weekly poll of how Chargers fans feel A.J. Smith is doing as the Chargers General Manager. We've now begun to chart A.J.'s past approval ratings as well.

Well, that was certainly a bounce-back win. Again, we got to see the team's depth on display this week, especially along the front seven. Also on display: the lack of depth at Cornerback.

Since the last poll, a few moves have been made. The biggest move came on Friday when Nate Kaeding was left behind in San Diego and Nick Novak got the call to join the team in Kansas City. Kaeding is suffering a groin injury and was unable to kick effectively, so A.J. picked up the phone and got Novak on the team. Novak went 3-for-3 on PAT attempts and 2-for-2 on field goals. I'd say that's an effective signing.

Troubling, though, was the lack of depth at Cornerback. The team carried just 3 CBs in Kansas City, making them woefully thin. That just won't cut it this Sunday against the Saints, and apparently A.J. knows that as veteran CB Chris Carr is all but set to join the Chargers this week.

We've been saying since before this season started that "winning cures all" and so far this season that seems to be holding true as A.J. Smith's approval rating seems to be following the team's Winning Percentage. Win your games, and people like the job you're doing, lose one game and the approval drops off. 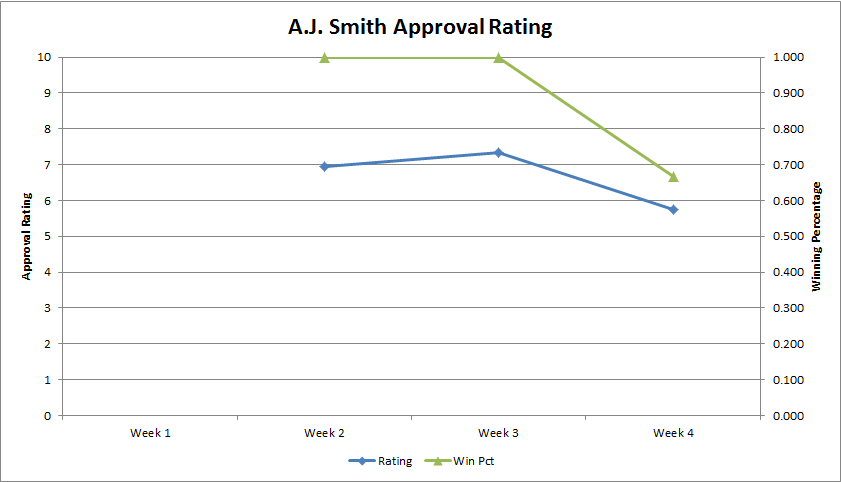 Will A.J. Smith make like the Chargers and bounce back this week? That's entirely up to you, so vote and comment below!