Last Sunday in Arrowhead Stadium, the Chiefs delivered the game to the Chargers as quickly as an overworked and under-tipped Denny's waitress. To their credit (and for the 3rd time this season), the Chargers were smart enough to get out of the way.

Piling up wins against mistake-prone teams doesn't win beauty contests, it doesn't impress national media or local fans, and it doesn't carry the cachet of a victory over an elite team.

I don't care. I think it's important to remember that the Chargers are now 3-1, with 2 division road wins. They have a 1 game lead over Denver, and after Sunday's results, the AFC West looks like a two-horse race. The Chargers just walked out of Arrowhead with a win, which is an accomplishment (remember the last 2 years?) no matter how much Matt Cassel sucks (and he does).

Philip Rivers was back to his old efficient self yesterday. With the exception of 2 really bad throws, Rivers was a study in how not to lose a game (see Cassel, Matt for an opposite example). His numbers were not phenomenal, but after an utterly awful performance against the Falcons, Rivers rebounded with 18 completions against 5 incompletions, for a healthy 9.1 yards per attempt average, and the 2 TDs. Also, he was terrific in making Chiefs' SS Eric Berry look bad, consistently finding TE Antonio Gates in single coverage on the opening drive. Only 2 things I didn't like... 1 was a throw into the endzone for WR Eddie Royal that had to get through 2 Chiefs' defenders and didn't. The other was the INT intended for WR Robert Meachem, which was thrown into traffic and took a sure FG attempt off the board, in addition to sparking the only Chiefs scoring drive of the 1st half. The Chargers can get away with one or two of these Favres (i.e. boneheaded mistakes) a game against bad teams, but as the loss to Atlanta showed, Rivers can't do this against good teams.

Here's what I like about the decision to kinda' but not really, but just try and make a point non-benching of Ryan Mathews - for this game, he was much better at protecting the football in traffic. He also ran well when he had the ball, totaling 82 yards on 16 touches - 14 carries for 61 yards running, a 4.4avg. and 2 receptions for 21 yards. Here's what I don't like about Mathews not being on the field - the offense suffers. Jackie Battle showed why he's not more than a situational player, gaining a measly 39 yards on 15 carries, even if he scored 2 short yardage TDs. Besides Mathews, the RBs totaled a solid 90 yards on 8 catches (Ronnie Brown had 2 nice catches on wheel routes), and were generally decent in pass protection

This was an almost invisible game for the WRs and TEs. Rivers' targeted the receivers only 13 of the 23 times he threw the ball. Gates was the most productive, even with only 3 receptions for 59 yards, because of the repeated defensive penalties he drew against Berry. The surprise of this group was Royal being the leader in targets with 5, converting 3 of those into receptions, including the TD. Unfortunately, Rivers and WR Robert Meachem still can't seem to get on the same page, with Meachem's two targets being an underthrown deep ball from Rivers, and the INT mentioned above. WR Malcom Floyd had 1 nice back shoulder reception on the opening drive, then disappeared, finishing with 23 yards on 2 receptions.

Welcome back Jared Gaither. Except for a nice inside move for a sack in the 3rd quarter, normal Charger killer DE Tamba Hali was largely invisible. On the right side, Jeromey Clary, take a bow. This was Clary's best game this season, by far, making sure that Chiefs' OLB Justin Houston was a total non-factor. C Nick Hardwick was steady and reliable as usual. Now, on the other hand, RG Louis Vasquez was not very good, consistently getting beat in the run game. But he didn't have the really bad game that LG Tyronne Green had. Green was responsible for allowing 2 sacks on Rivers by DE Ropati Pitoitua (who? exactly). Run blocking as a whole was adequate, if not great.

Best game of the season so far for the D-Line, hands down. DEs Corey Liuget and Vaughn Martin absolutely abused Chiefs' LG Jeff Allen and RT Eric Winston all day long. Both also forced the 2 fumbles by Chiefs' RB Jamaal Charles. Liuget also pushed the pocket in on Cassel, helping to some degree with the errant pass that was intercepted by Chargers FS Eric Weddle. All things considered, the Chargers held up relatively well against the run. Take away Charles' incredible 37-yard TD run (very few RBs ever could have made that play), and the Chargers limited the Chiefs to 82 rush yards on 21 carries, a 3.9 average. DT Aubrayo Franklin and Cam Thomas we stout at the point of attack, limiting the Chiefs and drawing the double-teams that freed up other players. As a group, the unit combined for 4 tackles, but did a great job of allowing the LBS to roam and make plays.

Speaking of abusing Eric Winston, Shaun Phillips, step forward. Phillips registered a sack and forced fumble, and came very close to a second sack and forced fumble (taken away by the ruling that Cassel's arm was going forward). ILB Donald Butler rebounded nicely from last week's disaster against Tony Gonzalez and took Kansas City's TEs completely out of the pass game, and contributed a TD via Interception. Also, we have a Larry English sighting, contributing half a sack along with Butler. On the other side, OLBs Melvin Ingram and Antwan Barnes were largely neutralized by Chiefs LT Branden Albert. Ingram however, had some nice plays, including a pass deflection and tackle for loss on consecutive plays. And as for hustle plays, Ingram blew up Albert blocking on Butler's INT return. As a group, the LBs contributed 19 tackles to the cause. Nice game all around.

It's really this simple... the Chargers' DBs that weren't covering Chiefs WR Dwayne Bowe had an excellent game. Otherwise, Bowe had his way with whichever corner he was playing against. Cason doesn't have the size to cover Bowe, and Jammer no longer has the speed or athleticism, as evidenced by Bowe's 108 yards and TD on 7 receptions, even with Cassel throwing him the ball. Cason also fell asleep on the 29-yard garbage time TD to Bowe. Beyond Bowe, the Chargers DBs came up with 2 INTs (Weddle and Cason), and combined for 22 tackles. Of all the changes to the defense, one of the biggest surprises has to be SS Atari Bigby, who continues to impress with sure tackling, respectable coverage, and tremendous versatility. Jammer forced the 3rd Chiefs fumble of the day from reserve Chiefs RB Shaun Draughn.

Kudos to PK Nick Novak, who filled in ably for injured PK Nate Kaeding on short notice, and converted FGs of 24, 45, and 47 yards. P Mike Scifres had an OK game punting the ball, although he failed to place any punts inside the Chiefs' 20 yard line, and had his 1st touchback of the season. Coverage and return units were generally solid, and the only real mistake came on a fumble by Royal, which was instantly grabbed by Bigby.

Defensive Coordinator John Pagano came up with a simple and effective game plan. It was called "Make Matt Cassel Beat Us." With the exception of Bowe's ridiculous receiving ability, he was right. It appears also that the defensive line got some hard coaching during the week, as they were more active and constantly attacking the football, trying to force fumbles. On the offensive side, Norv coached to protect Gaither (and by extension Rivers), and called a game that relied heavily on pass plays to the underneath receivers. By and large, the strategy was effective.

On a side note, for all of you who insinuate that Norv Turner is the worst coach in the NFL; he may not be great, but at least he's not Chiefs Head Coach Romeo Crennel. For a textbook example on how to and how not to burn challenges, Turner lost his only replay challenge, a Cassel almost fumble when hit by Shaun Phillips. Crennel won his challenge, on a play that saved the Chiefs 5-6 yards. Really, Romeo, you're challenging over 5-6 yards in the 1st 5 minutes when it doesn't result in a 4th down, turnover on downs, longer FG, or anything else really significant? 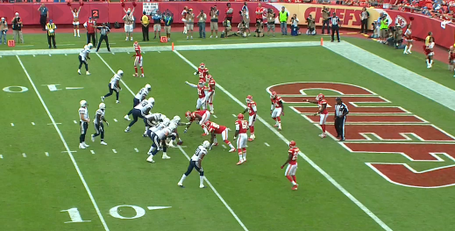 2nd down and Goal from the Chiefs 4. The Chargers are in 11 personnel, strong left. Rivers is already motioning Brown out to the right, creating an empty backfield. Notice how confused the Chiefs defenders look. 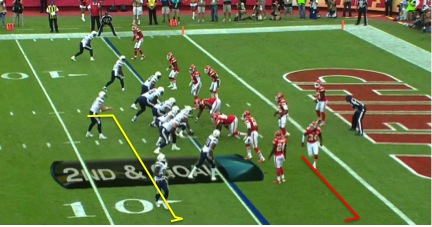 Chiefs' DB Travis Allen motions out with Brown, showing man to man coverage, and a possible blitz. Notice that the Chiefs defenders are not playing press coverage. 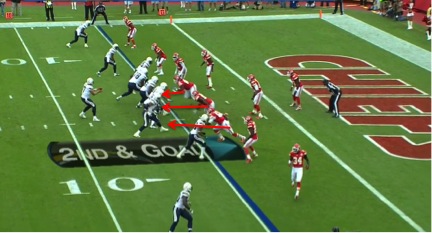 The ball is snapped. Romeo, Romeo, thou art a trickster Romeo. The Chiefs show man coverage with a possible blitz, but only rush 3. Still, there's a lot of guys not moving very fast to pick up zone coverage. 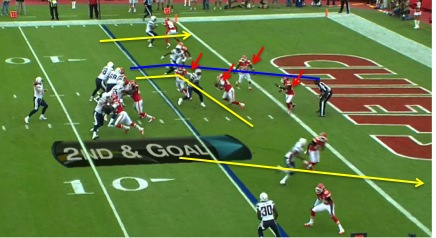 The play call is something like 229 H flat S slant. Rivers hits the back of his drop and the ball is on the way out. But check out the 4 Chiefs' defenders in the middle of the field (red arrows). They're all (Hali, Berry, ILB Derrick Johnson, and FS Abram Elam) covering Antonio Gates! Meanwhile, Royal has already crossed the face of CB Javier Arenas, thanks to the lack of press coverage. See other angle below.

In this angle, you can see the 4 defenders paying attention to Gates, while Rivers never even looks Gates' way. As shown here, Royal has crossed Arenas' face and this is going to be an easy pitch and catch TD. I get that you want to take away Gates in the redone, but really Romeo... 4 guys? And no one except Hali hits the receivers? BTW, ups to Clary for handling OLB Justin Houston on an island.