A Response to the San Diego Chargers' Prescribed Chill Pill

Share All sharing options for: A Response to the San Diego Chargers' Prescribed Chill Pill

Disclaimer: I really, really like Bill Johnston. He has been nothing but nice and gracious towards me as a man and as a "member of the Chargers media" (yes, that requires air-quotes). You couldn't find a more well-liked man at Chargers Park, and I understand why. Nothing said below is meant as criticism towards Bill or his blog post. It is simply the counter-argument from a fan that sometimes represents other fans.

In case you missed it, Bill Johnston (the head of PR for the San Diego Chargers) posted this blog entry yesterday on Chargers.com entitled "Take a Chill Pill." It ... well, let's get into the post itself and you'll be able to gauge my thought process on the matter.

Now get over it. It was a loss. One loss.

Listening to some of you out there, you'd think Monday night was "win or go home" and the Chargers are now packing their bags.

It wasn't one loss. One loss doesn't send the fanbase into a spiral like this. This lack of faith in the 2012 Chargers has come from three losses, to the Falcons, Saints and Broncos. Those quick to jump off the bandwagon are also doing so with the failures of 2008-2011 in their back pocket. Sure, there was a win against the Chiefs in week 4, but if the Chargers beating a middle school team is supposed to bring me any solace, then something is very wrong.

After week 2, fans were hesitant (because of the last few seasons) to admit that this was a good team, a playoff team. Their toes were dipped into the water though. After week 3, where the team was embarrassed by the Falcons, toes were coming out of the water. In the 3 games since, the Chargers have shown fans that they can not defend the pass and they can't put anyone away when they have the lead and the ball. In fact, they'll bring teams like the Saints and Broncos back into the game when it seems all but over.

Some of those folks are probably the same ones who called for former Head Coach Bobby Ross' job when his first Chargers team started the 1992 season 0-4. I still remember the self-proclaimed experts saying Bobby was "in over his head". The Chargers went on to win 11 of the next 12 games that year, along with a 17-0 victory in the first round of the playoffs.

Could the Chargers turn it around this season? Sure. We all want them to. We'll continue to watch them and monitor progress of young players and cheer them on. Is it likely that they will? Not exactly, so I don't think you can really blame those that are ready to put a fork in a team that hasn't made the playoffs since 2009.

If you want these players and coaches to succeed, then support them. Don't tear them down. What you want and what we all want, including your team, is to know people believe in them.

See, this is where you really start to lose me, Bill.

The idea of "Stop saying the team is bad because you never know what's going to happen" is a baffling one. Should Browns fans and Chiefs fans just ignore what they see on the field and continue to support their team? Are Chiefs fans in the wrong in demanding that Pioli and Crennel be fired? Sure, they're not tied for first place, but their fans are dealing with the same doubts about their favorite franchise as Chargers fans are.

Anything can happen, you're right. This is why they play the games and it's why we watch. However, half of the fun of sports is talking about sports. Trying to find a bit of insight and then being proven right about it. If you want fans to hold back on their opinions because they can't predict the future, the team can play in an empty stadium and we'll be at the parade when we get word that the Bolts have won the Super Bowl. Gosh, that sounds like fun.

"Support them. Don't tear them down." What you're asking for is crazy. You want the fans to blindly support and cheer for everything the Chargers do, but not boo or doubt any decision? When did this become an abusive relationship? Or communist Russia? 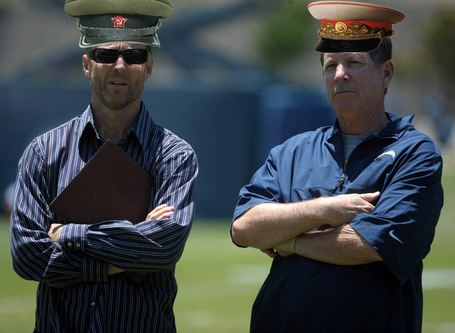 Look, I grew up right outside of Philadelphia. I spent 5 of my adult years there and came to understand the Philadelphia sports fan. They get a bad rep for booing too often or too soon, but I admire their booing. You know why? Because it's a sign that they care. Succeed and they love you. Fail and they'll boo to show their displeasure. They don't hate their team. They're not trying to tear them down. They're yelling "This isn't working and we are making it so that you need to find a way to make it work." It's a motivational technique.

If the Chargers are your team, get behind them and stay behind them. We're all at our best when we know others believe in us.

I am the owner of a small business. I have more than 5 but less than 10 employees that answer directly to me. I've had to learn a thing or two about motivation over the years to get the most out of them. The idea that "We're all at our best when we know others believe in us" isn't entirely true.

I'll give you an example. The best boss I ever had (also the boss I will always hate the most) was nearly impossible to please. I broke all sorts of records at the company that I worked for, both in terms of pure numbers and in terms of age (In a company of 500+ employees, I was the youngest person at my position by a good 20 years). I'd come bounding into his office, ready to show off my accomplishments of the week, and his response would be something to the effect of "That's fine. Now don't get lazy or big-headed."

It drove me crazy. I was absolutely dominating and he would treat me as if it was what he expected of me. My big accomplishments were nothing special. God forbid I had a down month, it was like I had murdered his children in front of him. Without realizing it, I had gotten into a pattern of giving 100% and performing my best all the time simply to keep him benevolent. Only once in the several years that I worked there did I get a pat on the back and a "Good job!" It was the best day ever.

That's one motivational technique. Is it mine, as a boss? Not typically. However, to say that "We're all at our best when we know others believe is us" is to say that being tough on someone as a motivational technique doesn't work. That's just wrong. Some people just need to be yelled at before they're going to live up to their potential. Ask Bill Cowher. Ask John Gruden. Heck, ask Norv. Even he can only give Rivers so many "Don't worry, champ. You'll get them next time," speeches before he's in his face.

For some reason, it's okay when the Head Coach or the GM talk about the team heading in the wrong direction but not okay when it's done by someone on sports radio, or on a sports blog, or on Twitter. That, my friend, is a double standard.

Booing and criticizing the team is done from a place of love. It's a statement from the fans that they do not believe in the team or its direction, and they want things to get better. It's easier to vocally cry out for reasonable things like a new coach or a new GM fixing things, because that happens more often than the magic of the Chargers 1992 season. It doesn't mean we're not supportive. It doesn't mean we don't believe. It just means that the performance, so far, has been unsatisfactory.

LobShots: Take a Chill Pill, Huh? Let's Talk About That

(I would also welcome a conversation with Bill on this matter)