The more things change, the more they stay the same. Like a bad slasher film series, the question for the Chargers is not if they'll kill themselves and their beleaguered fans with mistakes, but when and how. In Monday night's case... And How!

I watched the 2nd half of that game, wondering not if, but when and how - which is what made John's Freddy Krueger reference so apt - we've seen this so often the last 2+ seasons we're becoming numb to it.

For the 4th time in 6 games, the Chargers leave the door open to a comeback by not finishing off their opponent. Against Carson Palmer and Matt Cassel, no worries. Against Drew Brees and Peyton Manning, epic 2nd half collapse. When you add the blowout win over the Titans, and the blowout loss against the Falcons, a very simple pattern emerges. The pattern is so consistent, that you can basically guess the Chargers' 2012 record simply by looking at the opposing QB.

Even more troubling, is that the foundation of this team's construction is crumbling like brick built on quicksand during an 8.0 earthquake. The assumption the last few years has been that Philip Rivers would take us where we want to go, but last night's game calls that conclusion into serious doubt.

On with the grades.

Quarterback: F is for F***ING FAIL!

6 turnovers is the only statistic that matters here. Seriously, I don't care about any of Rivers' other statistics. Tony Romo and Michael Vick think that's a lot of turnovers. Brett Favre thinks that's a lot of bad throws. Here's the INT breakdown: #1 - jump ball to TE Antonio Gates. #2 - badly underthrown post to WR Robert Meachem. #3 a quick in to WR Eddie Royal. and #4, a quick out to Royal. Of these 4 INTs, only 1 of these (#3) can be partially blamed on the receivers. Now, let's factor in the 2 fumbles, the 1st of which was the true turning point in the game. Rivers himself said that he wasn't fooled by anything Denver did, which means his execution and decision making was severely lacking. To me, the simple truth is he's playing like someone who doesn't trust his teammates.

I'm also not interested in any possible loss of arm strength from Rivers. Having a rocket arm is nice, but many QBs have been successful without it, by being placed in a system that fits their strengths (see Manning, Peyton, 10/15/12 for a good recent example).

Without question, this is the worst professional football game Philip Rivers has ever played. Furthermore, the decision making and execution were so awful, continuing the pattern from 2011 on steroids, you have to question if a) Rivers is mentally capable of carrying a team, b) Norv Turner is capable of coaching him up, c) the player no longer fits the system, d) the talent around him has fallen that far, that fast, or e) all of the above.

At least Ryan Mathews was featured this week. That's really the best thing I can say. Mathews ran relatively well, collecting only 74 yards on 22 carries, and adding 19 yards on 4 receptions. Ronnie Brown saw most of the 4th quarter action (which is odd because he's not an explosive player and the Chargers were trailing), and contributed 36 yards on 6 touches (3 runs, 3 catches). Jackie Battle converted 1 first down run for his highlight of the night. Also, this group was seldom used in pass protection, where their help could have been used. Furthermore, I don't think the coaches were calling the correct running plays (see Coaching below).

It only took 6 games, but we finally found a game where we could get TE Antonio Gates the ball. Gates was a major headache for the Broncos LBs and DBs all night, which makes his 2nd half disappearance all the more frustrating. For the game, he totaled 6 catches for 81 yards, with 2 TDs. WR Malcom Floyd added 5 catches for 60 yards, usually opposite CB Champ Bailey. WR Robert Meachem added 3 catches for 30 yards, but Rivers missed at least 2 good chances to get him the ball downfield. Now, to WR Eddie Royal, who is partially (or mostly) to blame for the 3rd Rivers INT, by failing to finish an in route and leaving the ball to get picked by CB Chris Harris. Royal did have a a couple of nice plays, but it's not nearly enough when you're targeted 5 times, and 40% of your targets result in INTs.

Yes, the matchup against Denver OLBs Elvis Dumervil and Von Miller is a difficult matchup for any group of OTs, let alone a pair of functional OTs like LT Mike Harris and RT Jeromey Clary. Yes, it's even harder with a struggling QB and a coaching staff that won't give up slow developing run and pass plays. But it doesn't change the fact that Harris, and Clary continue to struggle against the better pass rushers in the league. In this particular case, Clary gave up the biggest sack of the game, the Dumervil strip sack that resulted in a 65 yard TD fumble return. On the next series, normally reliable C Nick Hardwick gave up a sack off a stunt by DE Derek Wolfe. On the meaningless final series, Clary again gave up a sack to OLB Von Miller, while Harris gave up another strip to Dumervil on the Chargers' last offensive play. Also, it's becoming evident that LG Tyronne Green and RG Louis Vasquez are liabilities in any running game that involves pulling and trapping, which is also the case for Clary and Harris. Put simply, this group is at best functional as long as LT Jared Gaither is off the field.

The defensive line didn't get much of anything, except for another solid week containing the run game. Denver RBs Willis McGahee and Ronnie Hillman combined for 59 yards on 19 carries, just a 3.1 per carry average. On the downside, no one save DEs Vaughn Martin and Corey Liuget got near enough to Denver QB Peyton Manning to do much of anything, other than make him shuffle his feet, and that happened only once each. As a group, the D-linemen combined for only 7 tackles.

This week, we saw some serious retrenchment from the LBs. As a result of Denver using the no-huddle, the Chargers were faced with playing OLBs Shaun Phillips and Jarrett Johnson much more than they wanted. And that formula basically meant that the Broncos were facing a weak 4 man rush for much of the game. There were no impact plays from anyone in this group to speak of, just a collection of tackles downfield, with 23 total among the whole group. The closest anyone got to Manning was when ILB Donald Butler came on a blitz, and somehow missed.

This is a D in honor of CB Quentin Jammer, collecting his first career pick 6. Which was nice, because otherwise, he and everyone else was burned early and often. I understand that Manning is a great player, and I also understand that Manning not pressured consistently is a deadly player. That being said, anyone care to explain how WR Eric Decker got so wide open on the 85 yard TD 55 yard reception? Every single Broncos WR and TE ended up with at least 1 15+ yard plus reception. CB Antoine Cason continues to struggle in space, and SS Atari Bigby, while nice in run support, continues to give up pass plays to the opposing TE. WR Brandon Stokely had his way with the slot DBs. As always, FS Eric Weddle is the bright spot; his blitzes resulted in a deflected pass and caused Jammer's INT. As a group, the DBs totaled 27 tackles, not including a huge solo tackle by the 45 yard line.

Forcing 2 turnovers is always cause for celebration, and in this game the Chargers' cover units were solid and alert. The cover unit also did an outstanding job on one of P Mike Scifres' punts, downing the ball inside the 5 yards line. KR Richard Goodman had a pair of nice returns, one at the opening, and one in the 4th quarter that came close to a house call. PK Nick Novak converted his only attempt, a 32 yard FG in the 1st quarter. The only downer is Royal, who didn't do anything special with his PR opportunities.

Carrying over the points from the QB and OL section... if Norv Turner can't get Rivers fixed, and/or wont change the offense to help out, then what's the point of his being the Head Coach and Offensive Coordinator? I have defended Turner in the past, but it was always founded on the premise that he and Rivers work well together. Once that strength becomes a weakness, then all you have left is a coach with who hasn't won a playoff game since 2009, and who is making bizarre strategic decisions.

For instance, the best running plays the Chargers had against Denver were zone running plays, traps, and shotgun draws. This is because a) Denver's speed on defense is neutralized and b) they run counter to Chargers' tendencies. They also just happen to work against Denver - these are the kinds of running plays that Houston and New eEngland ran for 403 yards on 88 carries.

On Norv's part, It just looks like a lot of fitting round pegs into square holes.

On defense, it seemed like John Pagano's 2-4-5 alignment with selective blitzing worked rather well in the 1st half. At the start of the second half, the Chargers were caught in a 3-3-5 and Manning cut it to shreds. There was some more selective blitzing in the 3rd and 4th quarters, but nothing really seemed to surprise Manning, save for the previously mentioned FS Weddle blitzes. Also, Manning really took advantage of a worn-down Johnson and Phillips in the 3rd and 4th quarters - time needs to be spent figuring out the OLB substitutions for no huddle situations. 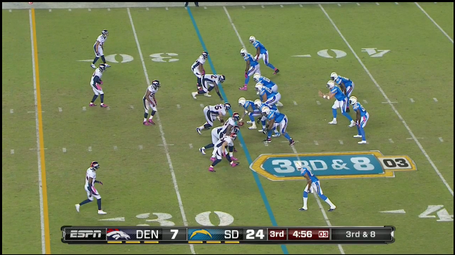 3rd and 8 at the Denver 33. The Chargers are in 12 Formation, with TE Randy McMichael on Rivers' right hand side, RB Ronnie Brown left. Denver is showing a 7 man rush. 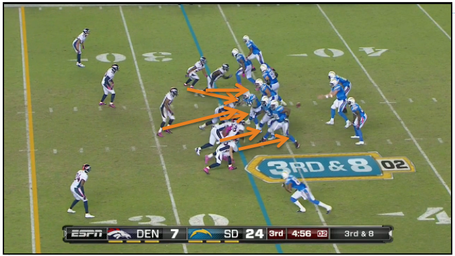 As it turns out this is a 6 man rush. S Jim Leonhard is coming up, but he'll be man-to-man with Ronnie Brown. ILB Wesley Woodyard is coming up the middle, while CB Chris Harris is blitzing from next to OLB/DE Elvis Dumervil. 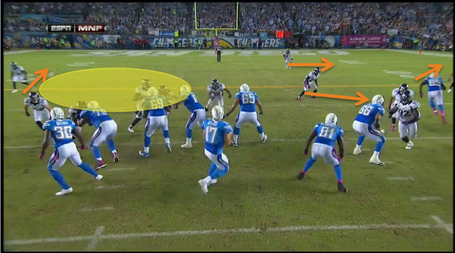 Here's the play from behind Rivers. Note the Single High safety moving to the right, leaving a huge gap in front left of the defense. That's where Rivers is looking, but no one's there. I think that's where Malcom Floyd is supposed to be, especially with Bailey playing off and retreating. 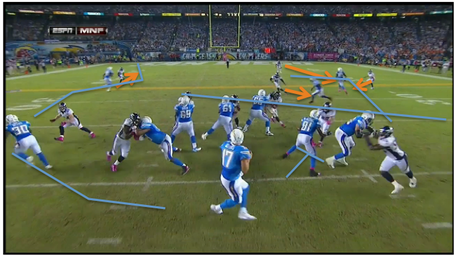 The play call is something like a 742 H Flat , with the TE staying in to block. However, I think this error is on Floyd for not coming off the post corner, and going to the slant - Rivers is still looking that way, and with Bailey backing off in coverage, it would have been an easy 1st down - maybe even a TD with a broken tackle. Meanwhile, Dumervil has beaten Clary. At this point, Rivers should be stepping up in the pocket, not falling further back. 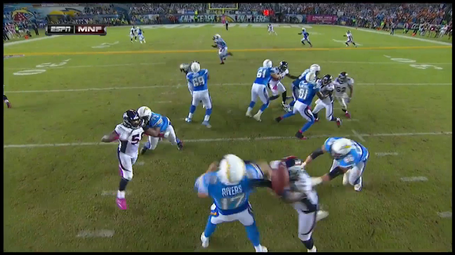 Rivers is looking deep for Floyd, with Gates clearing behind Meachem, but it's too late. Dumervil has reached Rivers.

Not having to re-watch a 2nd half collapse for the 3rd week in a row, thanks to the bye week.