The Chargers are coming off one of the ugliest losses in recent memory. Was it Norv Turner's fault?

As is typical following a Chargers loss, the vitriol starts to spew forth and Chargers fans everywhere begin calling for Norv Turner and A.J. Smith to be fired. I distinctly remember a Monday Night Football game in 2009 at Qualcomm against the Broncos where the Chargers lost 34-23 thanks to Eddie Royal running all over the Chargers Special Teams. Following that game, the Broncos were 6-0 on the year and the Chargers were 2-3. Fans were spilling out of Qualcomm Stadium shouting, "FIRE NORV!" and "FIRE AJ!"

As we all know, the Chargers would go on to win 11 straight games to finish the season 13-3.

Here we sit, 3-3 and tied for the division lead. No, I'm not saying this team is as good as that 2009 team, but coming off a dismal 8-8 season the year before, did we really expect the Chargers to win 11 straight? I see the collective "us", at the end of the season, looking back at this week and saying one of two things: "this was when the wheels fell off and the season was lost" or "this was the game that caused the team to really take a look at themselves and figure things out."

How the team responds in the coming weeks will show which way we're headed. 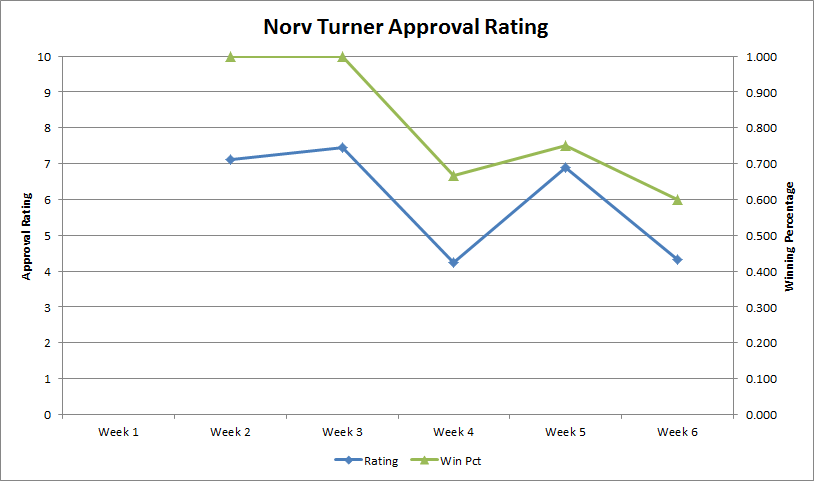 I asked on Twitter last night: "serious question: everyone calling for Norv to be fired, how is this game at all his fault?" And I received no responses whatsoever.

So here I am, still unconvinced that Norv contributed much to last night's meltdown. To me, the loss falls on the players, namely Philip Rivers. However, I'm a firm believer in "where there's smoke, there's fire." Maybe I'm just not seeing it and those of you calling for Norv to be fired know something I don't know or see something I don't see.

So please, convince me that Norv should be fired right now like many are demanding. Or, come to his defense and tell us why he should stick around.