The Chargers are coming off one of the ugliest losses in recent memory. Does that affect your opinion of General Manager A.J. Smith?

Well that was a fun game, wasn't it?

Yes it was an ugly loss, yes there's plenty of blame to go around. Has the team gone soft? Is it a problem with the players that A.J. Smith has assembled?

As is typical, the front office's approval rises and falls with the winning percentage of a team. 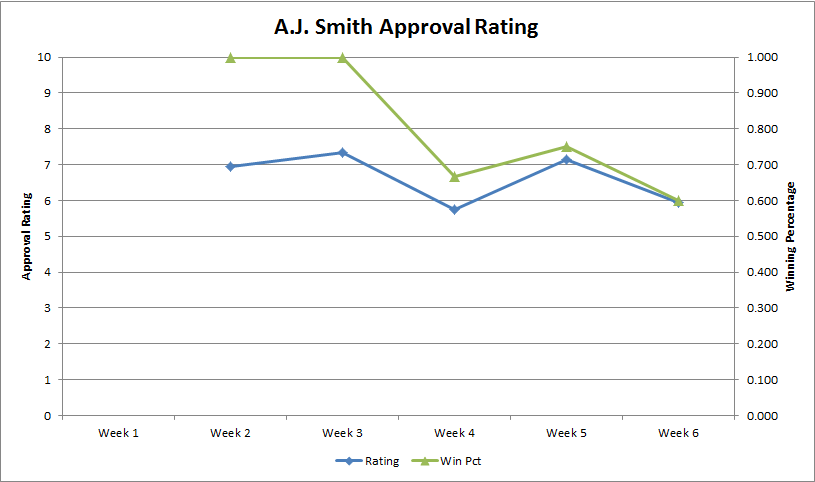 It's easy to forget how much the Chargers changed from the 2011 season to 2012. Let's take a look at the first year players that have seen significant playing time this year:

Okay, so Jonas Mouton was added to the team last year, but missed the whole season to injury; but this is still his first year playing in the NFL.

How many of those players has had a positive impact on the team? Any time Ingram seems to get pressure on a QB, he gets flagged. Reyes has looked good, at times. Johnson and Mouton have been positively invisible. Franklin has had an impact in one game. Mike Harris has no business starting at LT in the NFL yet (it's no indictment against his abilities, just that an undrafted rookie LT should not be starting). Robert Meachem and Eddie Royal ... sigh.

There were plenty of high hopes to start this season and following all the free-agent pickups during the offseason. A lot of that optimism hasn't panned out.

Are the players on this team not who we thought they were? Did A.J. pick up the wrong players for this team? Sound off in the comments below with your thoughts.