Defensive Analysis: Chargers at Raiders and the Chargers switched to the 4-3

Share All sharing options for: Defensive Analysis: Chargers at Raiders and the Chargers switched to the 4-3

For one play. Technically, about 6 but the other 5 were in nickel. It had to be done because of Antwan Barnes getting ejected and Shaun Phillips getting hurt. For the last game of the year, the pass rush, like it has for all but 2 games, decided to stay on the bench. No sacks, and only 2 times where Raiders quarterback Carson Palmer was running to avoid getting dropped. Now let's get to the important things, including the impending talk of

Will he? Should he? Yes he will be. Talk after the jump, but first here's the grading followed by the evidence everyone wants to see regarding the 4-3 defense no one wants to see because all of those fans who did want the change quit with Norv and AJ keeping their jobs in San Diego. 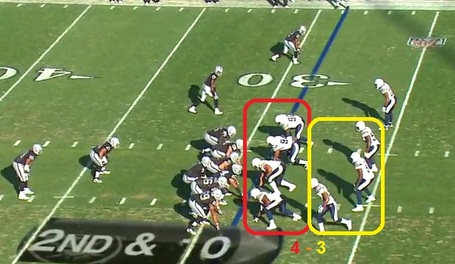 Well now, does anyone remember anything spectacular about that game? Because I don't. AJ Smith has to do better at his job of acquiring playmakers. We've already witnessed through 16 games how bad this team is at rushing the QB and stopping the run. It seems the only game this defense was truly dominant was the first game where DE Luis Castillo and SS Bob Sanders were present. We've seen how much the run D and pass rush have suffered without El Toro, and the secondary isn't any worse without Sanders, since his strength wasn't coverage to begin with.

This team really needs an elite pass rusher. Shaun Phillips missed 4 games and managed only 3.5 sacks this year for a sack rate that's half his normal average. Vaughn Martin, despite seeing only a fraction of the double team blocks as the guy he replaced, managed just one sack. Antonio Garay could only get 2.5 sacks now that he was the guy drawing doubles, with baby Godzilla getting himself 4 sacks and free agent acquisition Tommie Harris getting 3. Donald Butler and Takeo Spikes had 2 and 1 sack, respectively, which is half what Kevin Burnett did all by himself last year. Travis LaBoy managed a sack, and Larry English 2, showing that neither is capable of starting at a pass rush spot.

All of the points I'm making were evident in the game against the Raiders. Carson Palmer had far too much time to throw, and Michael Bush, although he never broke a run longer than 10 yards, always had a hole to hit and didn't really slow down until the second half when his team was down. Antoine Cason must have read what I said about him after the Chicago game, as he was certainly looking for the ball in this game. Four chances at interceptions and he got one when it mattered most. I've learned that Marcus Gilchrist isn't very good in zone coverage, so he has something to improve on this offseason.

If I was to make changes to the team, I'd take a good hard look at Greg Manusky. Yes, the defense he managed was barely average in the NFL. But for every case against him there seemed to be a good reason for consideration. His defense was bad at rushing the passer? Unhealthy Phillips, no Castillo, and coverage breakdowns giving quick throw options to opposing quarterbacks. Can't stop the run? Players unable to tackle, again, injuries, new players at new positions. Can't cover well? Weak pass rush means it doesn't matter how well you cover sometimes, Jammer injured, Gregory and Spikes not very good at it to begin with, no one winning 1 on 1 matchups on blitz plays... I am honestly indifferent to Manusky's job situation. If he's fired, fine. Change was needed. If he's kept, well that's fine too. Let's see how he does with a full offseason and with everyone healthy. Regarding next year and the draft, pass rusher would be the first draft pick and he would rotate between Phillips and Barnes at OLB. English and the rookie would be nickel rushers. Donald Butler would play third downs and blitz at least twice per game. Travis LaBoy would be demoted to waterboy, though players might die of thirst if he has to rush a bottle of gatorade to them....

Be sure to rec if you enjoyed these posts and would like them next year. Also thanks to Orz for the vid, and keep coming back to BFTB as I have a few more posts planned.