Power Rankings From Around the Web: Week 1

Share All sharing options for: Power Rankings From Around the Web: Week 1

I know, you don't even care what I have to say, you just want to see the pretty charts. Well hold on there bucko, I've got a few things to say before we get to the charts. Wait, nope, I've said everything I need to say.

Hey, just because I told you I've said everything I need to say doesn't mean there aren't other guys who have things they want to say. There is a common theme with what nearly every person had to say about the Chargers: they can't start slow again.

Time to turn talent and statistics into wins. Slow start and/or playoff fade are old scripts.

My favorite for MVP, Philip Rivers, and my candidate for coach of the year, Norv Turner, will finally find the formula to win early and not have to start the season in the hole. The Chargers will also benefit from solid defensive additions.

If they can get off to a fast start, they could finally have a special finish.

No way the special teams is as bad as last year. No way there are so many injuries. Plus, WR Vincent Jackson is back for the entire year. I like the Chargers a lot in 2011.

Okay, enough words, ready to see some pretty tables? You'll have to hit the jump first.

We'll start off, as usual, with the Subjective Average. If you're new to this post, these rankings are the ones that has actual people ranking the teams based on their gut feelings. You'll see in a moment that some of these sites may even just throw darts at a board, or have a chicken pecking at numbers. Regardless of method, they have rankings for us. 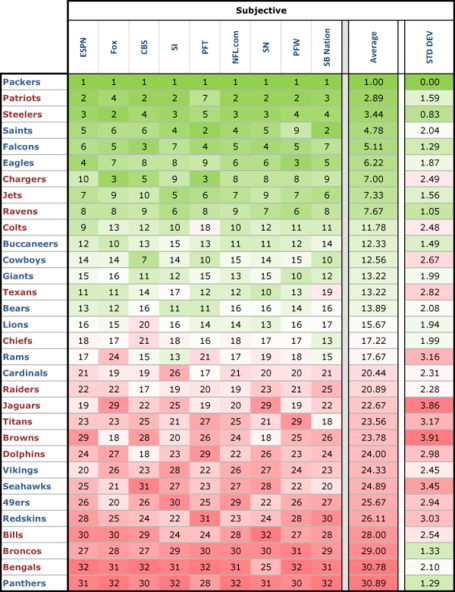 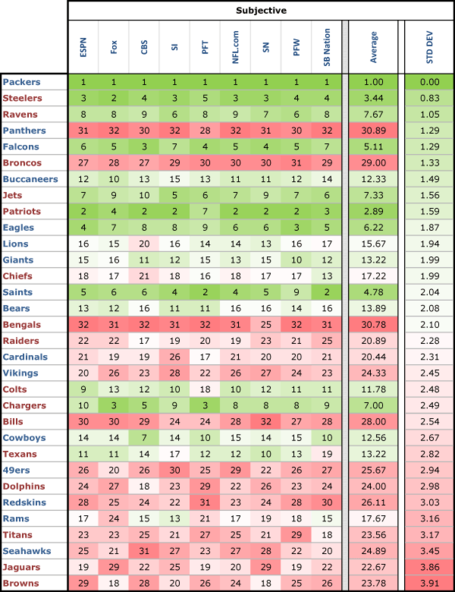 Now let's take a look at the other side of the coin: the Objective Rankings. These are rankings put out by geeks who come up with mathematical formulas that they all swear by as being the best way to say a team is good or bad. This is supposed to be a more reliable way to determine where each team stands.

There were only two objective projections this week, but that doesn't mean we can't take a peak anyway. Let's see how the teams stack up, shall we?

So, how far off the mark are the various formulas? It's kind of fun to compare only two sites.

Now let's average all the rankings together from ALL the sites. 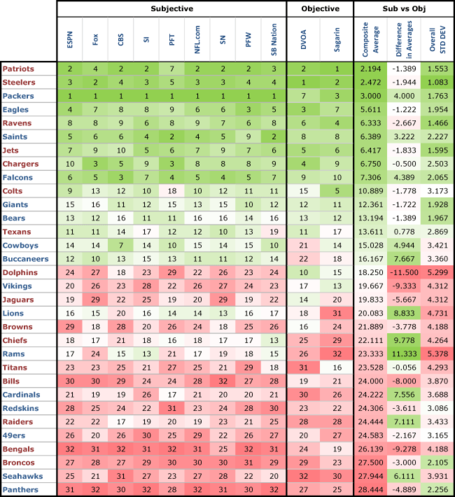 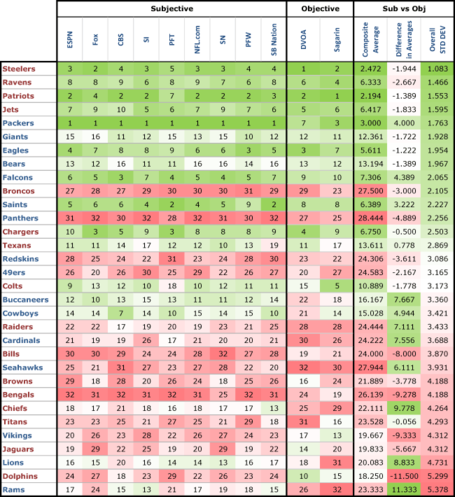 This takes a look and compares the Subjective average ranking with the Objective average ranking. This tells us just how far off people are from the formulas. A positive number means people think they'll be better than the math indicates, a negative number means the math thinks they're better than what people think. The closer to 0 this number is, the more in agreement the Subjective and Objective rankings are. 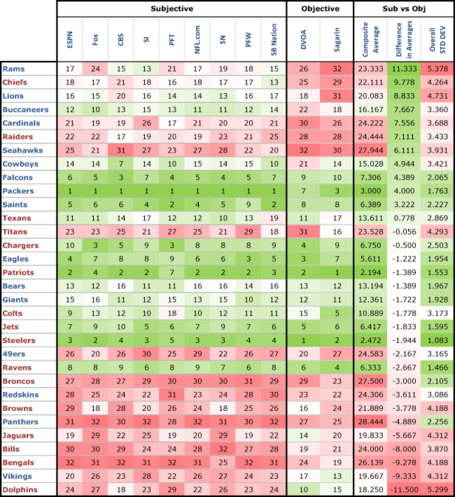