This installment is going to cover a slightly different area than some of our previous Playbook Confidential articles.  Most of the time we analyze the previous game and play-calling versus different personnel groups.  In this article, I'm going to take a look at some of the different offensive formations that the Chargers employ out of the same personnel grouping.

After the jump I will go more in-depth and focus on all of the different "looks" that the Chargers have given out of the same personnel grouping.

The reason I picked the "21 personnel" grouping to look at today is because it has shown the widest range of "looks" or formations so far this season.  Here are some of the looks that I have found, apologize for not having the same camera view for all of them: 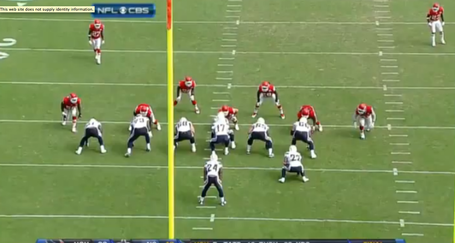 (Note: There is a WR split to either side in this formation that you can't see)

This formation is 21 personnel with Mathews and Hester in the backfield, with Hester offset to the right of center, and McMichael lined up next to the LT.  This "look" most often results in a run, but doesn't tip the hand as to the direction of the run since Hester is set up to block to the right, although the TE is lined up to make the "strong side" the left.  Hester will often also be motioned right before the snap.

However, this formation has also been very successful in the passing game, as Hester has an open route to the flat on the right, and McMichael running his route to the left will really stretch out the LB's in coverage.  Additionally, Hester and McMichael running routes to the flats vacates the LB's and opens up the draw play to Mathews which we have also seen from this formation.

Below is another variation of the Offset-I, with both WR's on the same side:

(Note: This is the play that resulted in the touchdown pass to Tolbert when Philip scrambled to the left)

Notice in this play how the TE is not lined up covering the LT in a blocking stance because, well, Gates doesn't block.  However, that does force the DE to line up wider. 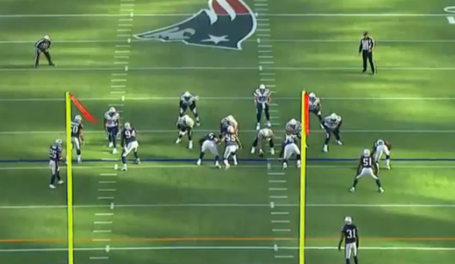 (Note: There is a WR split to either side in this formation that you can't see)

(Second Note: This is why Gates wasn't open against NE, look at how there is a DE and LB lined up with both guys ready to jam Gates to he can't get a free release, with a safety over the top. Triple-coverage look before the snap...yikes.)

This formation has both Tolbert and Hester lined up to either side of Philip Rivers from the Shotgun formation.  The majority of the time this formation results in a pass, with either the RB's staying in to block or going out of routes, or a combination of the two.  There is also the threat of the draw play with a lead blocker out of this formation.

We also see this formation used a lot out of 12 personnel with Hester being replaced with McMichael.

Another variation on the Shotgun formation appeared this last week in the form of a 5 wide formation: 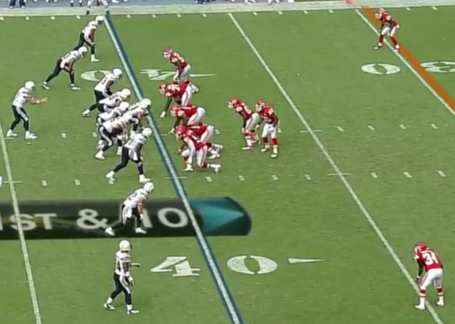 This is the "look" that is going to give opposing DC's for the rest of the season fits as they scout the Chargers.  Hester and Mathews have both shown to be reliable receivers, so they need to be accounted for when the team goes 5-wide like in the picture above.  You can tell in the photo above that the defense was completely unprepared for this formation.  Hester and Jackson are both completely uncovered, and the CB's are giving the outside receivers a huge buffer.

The Chargers ran this in 2 back to back plays in the 3rd quarter against the Chiefs, and both times gained a first down.  First time was a 20 yard gain to Jackson with a LB matched up to cover him, and the second was an 11 yard pass to Floyd.  This formation will create mismatches like no other.  There isn't a LB in the league that can cover Vincent Jackson, and this look alone will give opposing DC's nightmares of one of the most explosive WR's in the league being matched up against a LB.

The problem for DC's is, they never know when this formation will pop up because it is run out of 21 personnel.  You may be thinking that this formation would be more effective with 5 actual WR's instead...and you would be right.  However, if there are 5 WR's in the huddle, the defense will have a chance to send in more DB's to account for that.  If there are 2 RB's, 1 TE, and 2 WR's in the huddle, the defense will not have time to react if those personnel line up in a 5-wide formation.

Expect to see this formation again in the future, Norv may not run it every game and may only run it a couple more times this season, but it will be successful every time he does.  But this is perhaps the biggest point: it gives defensive coordinators something else to look at and gameplan for.  Regardless of if Norv runs this again or not, defensive coordinators are going to have to spend time with their players preparing for this play in the week leading up to the game, and that means less time spent preparing fancy blitzes or coverages.

As usual, please provide your feedback in the comments, we love to hear what you all think of this stuff.