Who is the Boldest San Diego Chargers Fan?

Share All sharing options for: Who is the Boldest San Diego Chargers Fan?

I ask for nominations for the boldest San Diego Chargers fan and instead got a debate over whether or not Guinness tastes like soy sauce. You guys are the worst, and your taste buds are permanently damaged.

Luckily, I found a candidate more worthy than Kendra Wilkinson to be named the boldest San Diego Chargers fan. Who is the lucky winner? His name is Dan Jauregui. If you don't recognize his name, don't worry. You know Mr. Jauregui's face.... 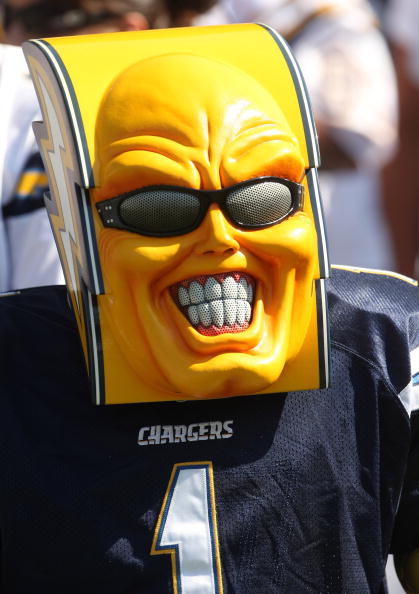 That's right, BOLTMAN! I had him in mind when Guinness first notified us about this contest, but it wasn't until I went digging for information that I realize how cool Dan's story is. Our friend Matthew T. Hall did a story for the San Diego Union-Tribune last year to announce who the man of mystery was behind the Boltman costume:

Boltman sprang to life in 1996 when Jauregui realized the Chargers didn't have a mascot and approached them with an idea.

Next thing he knew, he was on the field at games in an early incarnation of Boltman. He said he had an oral agreement - and a phone line at the Chargers compound - to be an unofficial mascot and if fans embraced him, he would be reimbursed for expenses and paid a salary.

If anyone knows of a way to contact Mr. Jauregui, let him know that I owe him a delicious glass of Guinness. That's his reward for being the boldest Chargers fan, and for entertaining us for so many years inside of that hot and heavy suit.

Nominations for the boldest Chargers fan at Bolts from the Blue should go in the comments below. If I receive zero nominees, I am just going to award the prestigious title to myself.