Share All sharing options for: Chargers DVR: Chargers vs Chiefs

This week's official NFL.com highlight package seems like it was mailed in to some degree.  In it you'll catch the following:

You can also catch the game ending Weddle screen pass interception, and the failed fourth down QB sneak that set up the endgame drama at NFL.com

We'll start the youtube rounds this week with some chargersdotcom locker room and podium interviews.  In this one, we hear from Eric Weddle, Antonio Garay, Randy McMichael, Takeo Spikes, and Shaun Phillips.

Since Ryan Mathews was the star of the show yesterday, we'll roll right into some good and bad Mathews details.  First up is a great job wrapping the ball up in traffic that looks like it would have been a fumble last year.  The second clip shows Mathews and Jacob Hester trying to get Philip Rivers killed.

We'll keep the focus on the running backs for now, with Mike Tolbert doing great effective work in the limited role we hope he keeps.  There's a typical TOLBERT SMASH play, and a highly unusual "and1" fullback carry, where Crayton lined up at halfback.

You've probably already seen Rivers' second interception.  I think it's important to show here that the play action fake was completely pointless and ignored by the defense because the running game was not yet established.

To wrap up the in game clips, we have a play where Marcus Gilchrist was left on an island with Steve Breaston, and did ok.  I think I'm comfortable with this guy starting a few games for Jammer.

Here's a bit more from chargersdotcom, this time at the podium where Norv says blah blah, Rivers says the win loss record is the most important stat, and Mathews credits his teammates and O-line.

Lastly, we have our CBS WTF moment of the week: 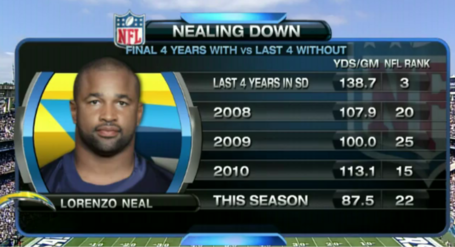 Come on CBS, can we drop LoNeal as a relevant talking point yet?  This graphic alone shows he's 4 years removed from the team!  That running game production sure wouldn't have anything at all to do with a hall of fame running back's prime career, or the rise of an elite quarterback, or a changing offensive coordinator's philosophy would it?