Despite the frustrating outcome and maddening mishaps, there were still a ton of good, bad, and interesting moments to revisit from the San Diego at New England Game.  Yes, we have to rehash the bad weeks too!  As is our new custom, we'll start you out with the edited highlights from NFL.com.  This week's highlight reel covers the following plays:

I was surprised the edited highlights did not include the semi-questionable Aaron Hernandez touchdown over Bob Sanders.  Am I the only one that thinks this catch *could* have been overturned, if reviewed?  It looks more solid in slow motion than in real time.

Now Updated with Mathews Sideline Collision with Arrington at the bottom...

So apparently, Tom Brady is the grand arbiter of NFL injury authenticity.  Please file all appeals to his timeout denials with Gisele. 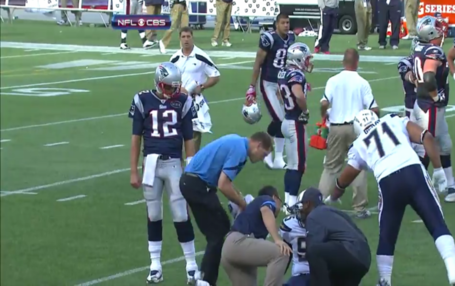 Here is a great example of New England's decision to die-by-Jackson by taking out Antonio Gates.  Watch Gates attract defenders away from VJ.  This kind of thing is why Malcom Floyd came back to San Diego for less.

Next we have a couple of Mathews runs out of shotgun.  This formation and call combination was highly effective against the Patriots because it was used so sparingly (see Playbook Confidential posts!).  Note the high snap on the 2nd clip because Nick Hardwick was in a hurry to get his run block assignment going.

Onto a couple of Tolbert clips.  First up, we have the reason why Tolbert was in on the game losing fumble play.  This is what Tolbert was supposed to do instead of dancing at the line of scrimmage.  This play is an examploe of why I think we should lay off Norv for having Tolbert in on that particular play, and focus on the weird cutback decision by Tolbert.  The second clip here shows Tolbert pretending to chase a bad snap on yet another highly successful Hester and1 draw.  Maybe I'm just easily amused.

It wouldn't be a contemporary Chargers highlight package if it didn't include Antonio Garay blowing something up.

This next clip shows a tantalizing small but delicious taste of what the fanbase expected to see from Manusky in general, and against Brady in particular.  New England went five wide, and San Diego answered with press man coverage with a blitz.  This is a huge risk-reward strategy by San Diego, and in this case it paid off.  Note Eric Weddle getting run over by a TE.

We'll finish up with some big fourth quarter defense with the game on the line.  The third and fourth down sequence at midfield gave the ball back to the Chargers offense with incredible field position and all of the momentum, while being down only six.  We all believed a win was in the bag after this stand.  We also have the non-interception by Jammer - it looked A LOT  tougher to handle in the replay than in real time.

By popular demand, the Mathews collision with Arrington late in the 4th quarter along the sideline