Stadium Thoughts and Musings... Convention Center or Stadium? Both? Neither?

Share All sharing options for: Stadium Thoughts and Musings... Convention Center or Stadium? Both? Neither?

Last night, an article appeared in the San Diego Union-Tribune in which Chargers General Counsel Mark Fabiani disclosed the broad outlines that will entail a proposal for a downtown football stadium east of Petco Park.

Fabiani reiterated the Chargers' idea that the stadium could serve as a supplement to a Convention Center expansion has been floated before, but Fabiani takes it a step further this time, proposing that money that was originally slated for a Convention Center could be re-directed to help offset stadium construction costs.

Needless to say, this is ruffling the feathers of more than a few people in the San Diego Convention industry.  On the other hand, it does drop some tidbits of information regarding the direction the Chargers are going.

What do the Chargers Have In Mind?

As in the past, Fabiani is projecting an estimated $800 million cost for the stadium, with the Chargers looking to contribute about $300 million towards the cost.  This leaves the $500 million gap that I've stated ad nauseum in this series, and finally, some idea that simply selling the Qualcomm site wouldn't quite do the trick.

Economist Alan Nevin, a principal at London Group Realty Advisers who helped the Chargers value the 166-acre Qualcomm site when it was considering a new stadium there eight years ago, estimates selling the lot now could generate $250 million to $350 million if a single company bought a large parcel.

Fabiani has a novel solution to this problem. Take the $550 million slated for the Convention Center expansion, and use it instead to build a combination stadium/convention center.

Fabiani says that the Chargers have asked Populous (formerly HOK - the go to firm for stadium design) to come up with a downtown design that features a retractable roof, but is also flexible enough to host other events, such as Final Fours, as well as providing convention space by covering a grass surface.  There was also mention made of space for restaurants, and other meeting areas (like what could be used for weddings, receptions, and other smaller events).

In fact, Fabiani was directly suggesting that a stadium could accomplish the goals that have been set out for a convention center expansion:

The reason Fabiani is pursuing this course is quite evident.  Public money for a stadium is the single biggest hurdle to overcome, and the convention center expansion has a built in means for acquiring those funds, as described by the U-T article below:

Meanwhile, the $550 million convention center expansion is dependent in large part on funds generated by an assessment of 1 percent to 3 percent levied on hotel bills. Other potential sources, including revenue from downtown food and beverage sales and a citywide surcharge on taxi fares, would generate up to $40 million in bond payments.

It is that financing plan Fabiani said that could be shifted to the stadium project instead:

It should be added, that raising these taxes DOES NOT require a public vote, and would be more likely to garner public support... "Hey, just let the Zonies pay for it?!"

Needless to say, the Convention Center and San Diego's hotel industry have something to say about this, and it's not good. 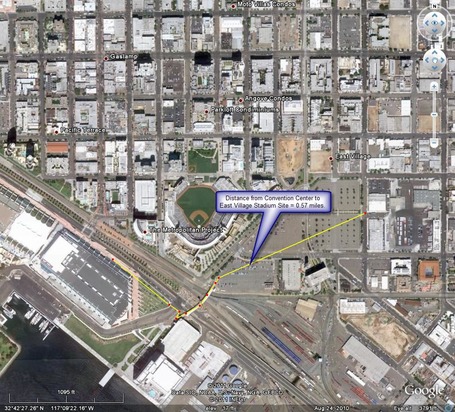 Why the Convention Center and Hoteliers are Pissed Unhappy.

It's not going to have any synergy with our convention center expansion.  They're not going to take our money. I don't know what they're talking about.

Hoteliers are fighting it for two reasons... One, they are afraid of losing the consistent business generated by large conventions.  Second, they would be competing with the stadium for exactly the kind of events that I described above in the Chargers section (weddings, receptions, small business meetings, smaller conventions).  This was the reaction from Mike McDowell, chief executive of the San Diego Lodging Industry Association:

It's like at Thanksgiving. Who wants to sit at the little kids table?  If you're talking to a meeting planner, you'll have to tell them that we have this convention center that will house two-thirds of your events, and you'll have to send some people across the street for breakout sessions. And you have to explain to them why they can't be where everyone else is.

Since there's no way on Earth that the city council is going to put the brakes on a Convention Center expansion, Chargers stadium or otherwise, I'm not sure where Fabiani is going with this.  Unless his idea is that some additional taxes could be placed on hotel rooms to help pay for the stadium - because it contains convention space and therefore doesn't require a public vote or money raised in some other fashion.

I suppose it's a feasible notion, and as long as hoteliers can get the convention center expansion, I don't see why they should vociferously fight a higher tax if it means Super Bowls, Final Fours, and other "large draw" sports events every few years.

Personally, I think a compromise could be accomplished by combining a slightly higher tax rate for the hoteliers by adding small convention space to a new stadium, and selling the Qualcomm (and Sports Arena sites).

Other Stadium-Related bits of news...