Against the Cardinals this week, the 1st team offense saw a continuation of themes from the Cowboys game along with a few interesting new wrinkles.  To check out the play log, use this link.  Feel free to play along at home and see if you can catch some interesting details using a few autofilters.  You can also check out the official gamebook here.  We saw a total of 47 plays from the starters, totaling 18 running plays (38%) and 29 pass plays (62%).  This is what we're used to for the post-LT Chargers.  Norv Turner was particularly aggressive with the air game on first down. 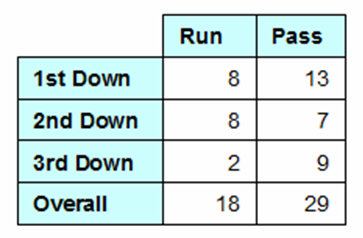 Starting off as usual with the running back details, we saw 30 plays for Mike Tolbert, and only 17 snaps for Ryan Mathews.  We once again saw Mathews used more to run the ball, with ten carries to Tolbert's seven.  This means that Mathews ran the ball 65% of the time he was in the game, while Tolbert ran the ball 23% of the time he was in the game (does this remind anyone of token Sproles runs? anyone?).  This made the presence of Mathews in the backfield a huge tendency towards the run.  This is consistent with a separate personnel/formation detail; in that Mathews was paired with a fullback (Jacob Hester) eleven times while Tolbert only lined up with a fullback four times.  That combination of Mathews and a fullback led to eight runs to only three passes.  I would call this a glaring tell, while JKVandal would call this Norv setting the defensive coordinator up for a fall.  Turning our attention over to the shotgun formation, Mathews only saw two shotgun snaps to Tolbert's 18.  Mathews is simply not trusted in pass protection at this time. 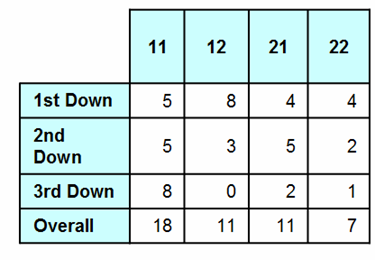