It's back to football, and a new season means new people — players, staff and coaches included. Newly–appointed Chargers defensive coordinator Greg Manusky has big shoes to fill. Size 15 is what former DC Ron Rivera wore, and my sources tell me Manusky wears a 13. In any case, Rivera ran the League's number-one defense last season despite not having a complement to Shaun Phillips, an "elite" defensive line, or even a Pro–Bowler in the secondary. Yes, there were some bad games, but overall Rivera was totally awesome and now Manusky has to perform at least as well. That's right. G-Man needs to somehow make this previously–number–one defense better and get them back in the playoffs.

Yes, the worst special teams ever was the main culprit of a 9-7 record, but a few improved defensive efforts would have meant a playoff berth. The good news, as John wrote earlier, is that Manusky knows how to run a defense. The 49ers had a very respectable defense while he was there, and taking over one of the best defenses in the league is just pressure to not get worse. But we won't be able to evaluate that until the next season is over. What we can look at is how G-man likes to run a defense and what we can expect from his play–calling, strategy and game philosophy.

Manusky seems to favor a traditional–style attack for defending the run. Linemen are supposed to occupy blockers and linebackers have to hit open lanes to attack the ballcarrier, as demonstrated in the picture above. In certain situations, with interior Offensive-linemen kicking out to block, Manusky seems to favor containment from linemen, whereas other 3-4 teams like pursuit from playside Defensive Ends.

Takeo Spikes is already accustomed to that style.

Donald Butler showed the most brute strength at the combine among linebackers, so in theory, he should excel at run–stopping if and when he plays. Shaun Philips is already a good run stopper, so no qualms there. Given that Oakland and Kansas City are great run teams, we need to see a front seven coached to shut down the ground game. G-man looks like that coach.

Kevin Burnett has departed, and that worries me. Lets hope for the best from Donald Butler. It seems that the 49ers didn't have very good players at the Nickel– and Dime–back positions, since they weren't in prevent–style defense much. Maybe it's because they had lots of games where they weren't in the lead. Yeah, that must be the reason.

Look at this picture.

If that isn't awesome to you then someone needs to give you a swift kick to the groin. Hybrid formations, unconventional formations... they are all awesome to me. I'm more of a defensive guru and there are 3 reasons why I love seeing the defense set up like this:

Greg Manusky is definitely an "attacking" coach. He likes blitzing; a lot. He blitzes relentlessly, to the point where sometimes, he's stubborn with the constant blitz playcalling. It didn't always work. Now reading that may have made you poo a little (or cry, depending on your personality) but don't be alarmed. That's an alarm's job.

You see, G-Man has something here in San Diego that he didn't have in San Francisco: a great secondary. No offense to Nate Clements, Shawntae Spencer and Dashon Goldson, but they aren't on the same level as Quentin Jammer, Antoine Cason, Bob Sanders and Eric Weddle. I expect blitzing to remain a priority since the Charger secondary is a steady step above the 9ers'. I also admire G-Man's dedication to his coaching. Look at this: 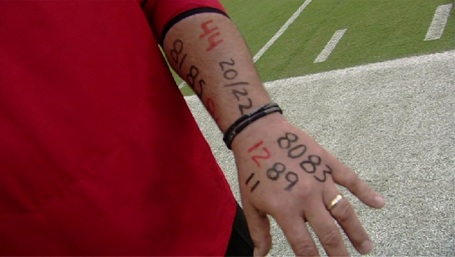 Those are numbers to keep the opposing teams' personnel in check with his own, and give him some thought into his playcalling. I admire that. While other guys want tribal designs on their legs (ahem...what tribe are you from, Rex? Caucasiandia?) Greg Manusky keeps his focus on his job. And he should be keeping his new defense focused on winning. I can look forward to that, and so can you.