I braved the crowds at training camp today so that I could bring you the latest and greatest breaking stories; and not to mention I really wanted to see some football. Reports say that about 3,000 people showed up today, and by the time practice started at 4:15, it was definitely standing room only. I was able to find a spot in the stands which enabled me to snap some pictures. I didn't have the best angles at times, so I apologize if some of them appear cluttered.

Good news everyone, FOOTBALL IS BACK! 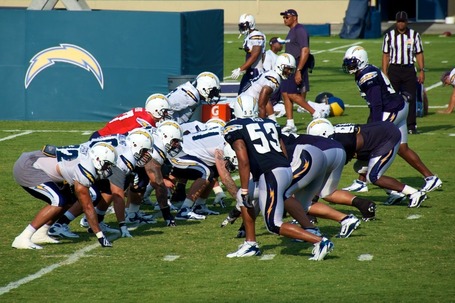 Concerned that you see James Holt lined up at OLB with the first team?  Me too.  English was working on the side with his still–recovering foot injury and the Free Agents (LaBoy and Barnes) can't participate until August 4th; I'll get to that later.

More of my thoughts and musings, and tons more pictures after the jump. 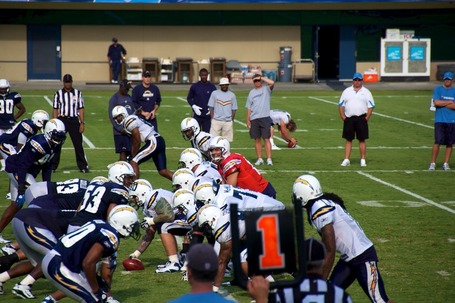 It's good to see Rivers over center again.  Goodman looked pretty good at WR today too. 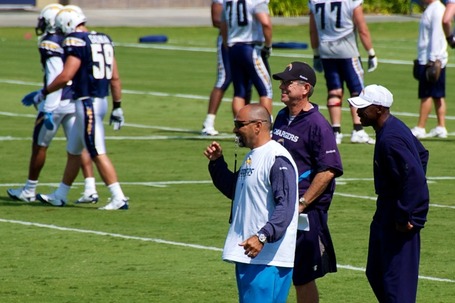 The coaches also seemed to enjoy finally getting their hands on their players.  Bisaccia lived up to his billing, running all over the field and keeping his players in line.  Although I think both he and Manusky were on their best behavior with the fans around, because I didn't hear any — ahem — expletives.  Although there was definitely A LOT of yelling going on after every snap. 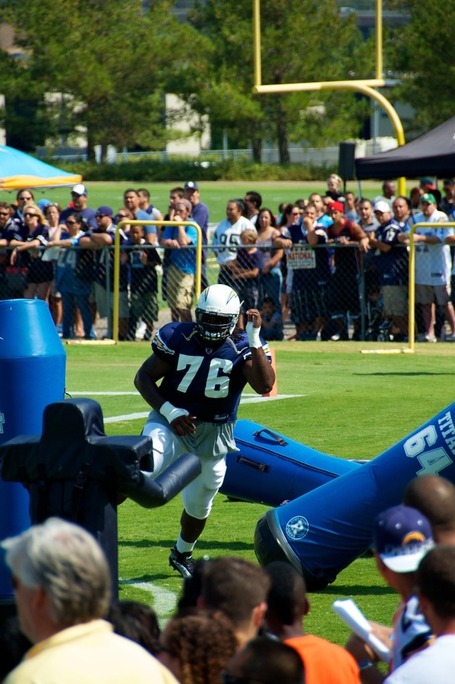 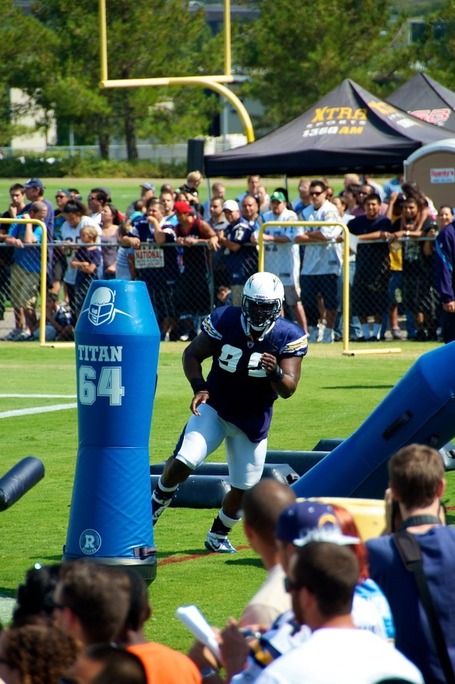 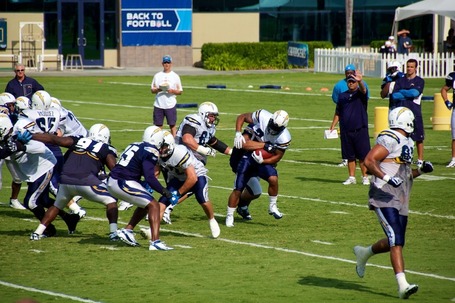 The Chargers' defensive line looked outstanding today. They were very disruptive in team drills and Garay and Martin looked very good in one–on–one drills. Martin made several plays in both team drills and one–on–ones that were very impressive. It was mostly his quickness that enabled him to beat the blocker to his gap, but he also showed some great strength in pass rush drills. I'm trying to hold myself back from getting too excited on Martin, but after one practice he looked much improved.

It is going to be hard for any of the UDFA's to make the team this year, there was a clear dropoff when watching individual drills from the guys that we know (Castillo, Nwagbuo, Martin, Garay, Thomas) to the guys that we don't (Blanc, etc.).  Although Blanc looked the best of the UDFA guys. 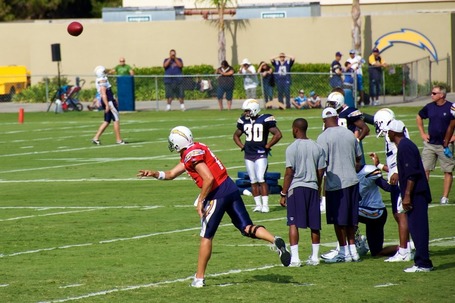 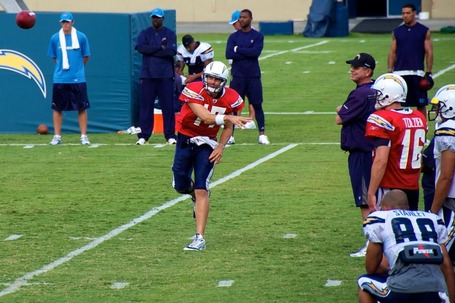 Philip was precise in his passing to the usual targets, but struggled to make completions to the new receivers.  Which leads me to believe that the new receivers weren't running their routes properly.  Not much else to see here, Rivers is the man. NEXT.

One young receiver stood far above the rest today: Seyi Ajirotutu, and not just because he was the tallest of them on the field today. 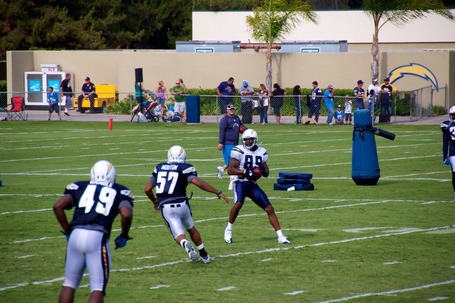 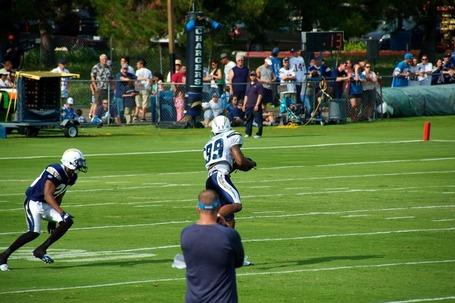 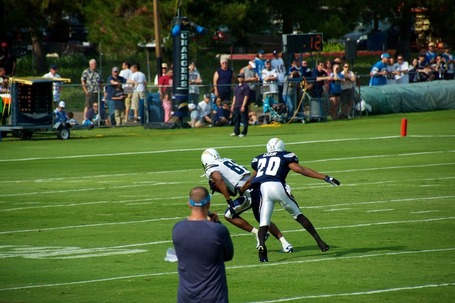 Not only did I not see Seyi drop a single pass today, but he ran very precise routes and always was able to get separation. Additionally, he actually had some nifty moves after catching the ball that may have enabled him to shake some tackles if they had been full contact. 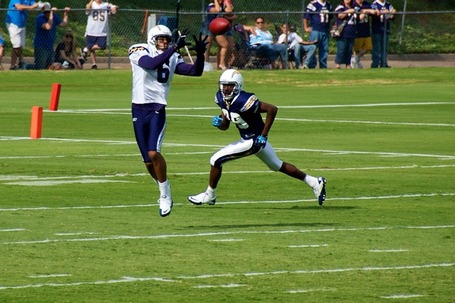 Can't remember if this was Kenny or one of the other young receivers — I lost the roster they handed out today to the wind — but Kenny looked good. He wasn't the fastest out there but he exhibited quickness before and after the catch, and solid hands. I always thought it was spelled "Kenney" but the back of his jersey today said "Kenny." *shrug*  (EDIT: After a second visit to camp, WR #6 is Adrian Cannon, not Cameron Kenney) 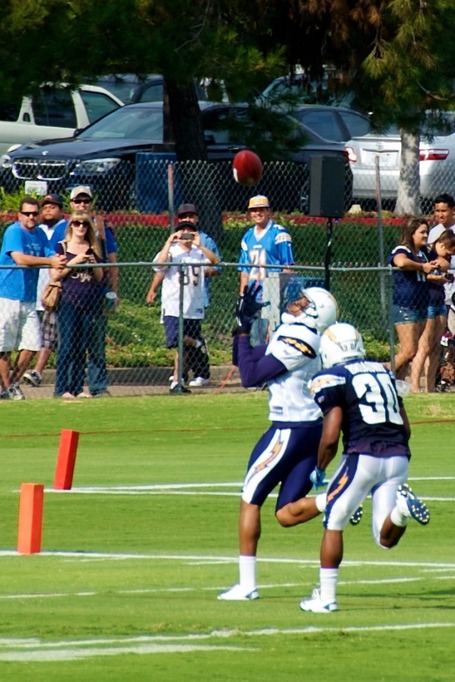 I think this was also Kenny, but not sure...sorry. (EDIT: I believe this was actually Cannon again)

Before I get to the next set of pictures, you should probably sit down. Vincent Brown did not have an impressive day. 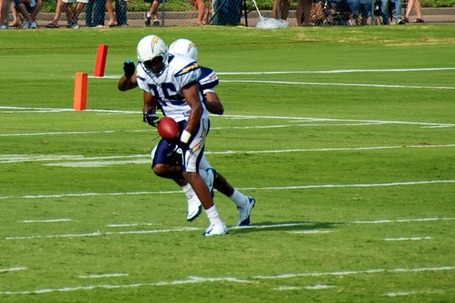 Brown showed some quickness at times, but he dropped some passes that should have been caught. In His first opportunity, he got a high pass at the sideline from Tolzein that was catchable, and tried to one–hand it, that didn't work so well. Then there was this drop above, which hit him right on the numbers.  There's a good chance it was just rookie jitters, so nothing to make a big deal about.

Not a good end to the practice for Vincent.  I haven't yet heard if he was injured but he definitely got pulled from practice early and appeared to be icing his hamstring. 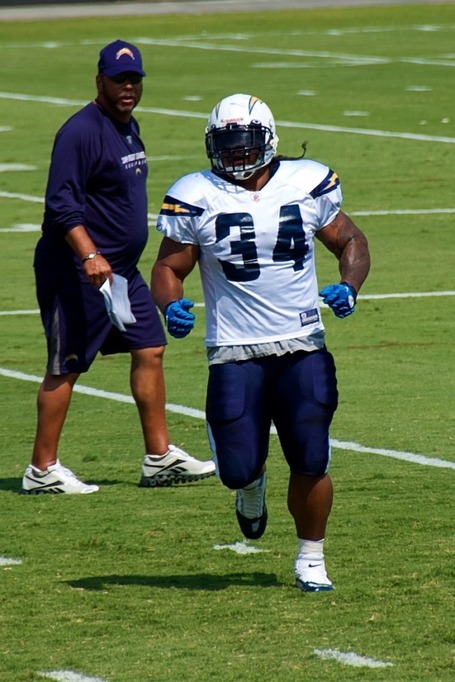 Frank Summers is a man's man.  Every time you heard the loud "crack" of pads and looked to find the source, there was number 34. This is a guy that lives for contact and runs like a bowling ball. I think the coaches were testing out his running skills today because he got a lot more carries than I expected, and ran over at least 2 or 3 people that I saw. Oh yeah, and he can catch.  Every time this guy got a carry the crowd cheered...he's the frontrunner for being the camp fan–favorite, but needs to leave a mark on special teams if he wants to stick. 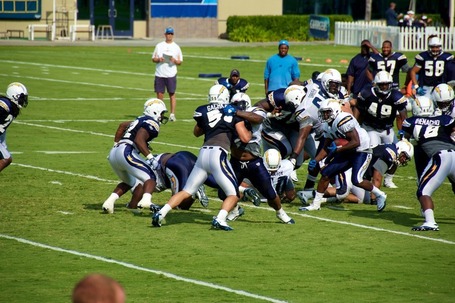 Oh yeah, and he can block too.  Gachkar made some plays in coverage with the second string, and seemed very quick down the field on special teams. 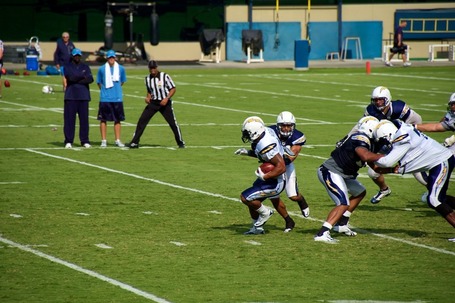 Gregory came up and made some big hits today, if it had been full contact he might have decleated Mathews on this play 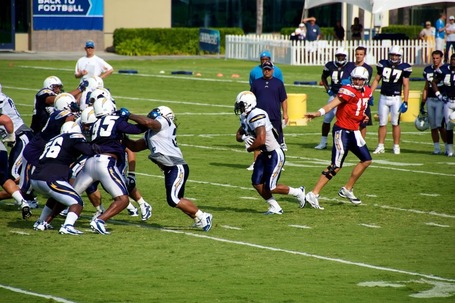 Mathews looked explosive running the ball as usual, and pretty good catching it out of the backfield.  But I didn't see a lot of Mathews today, to be honest. He seemed to sit out nearly the whole last 45 min or so of practice, but didn't appear to be bandaged up in any way. The team may have been giving the younger RB's a chance to shake them down and see what they are made of. Which brings me to my next point... 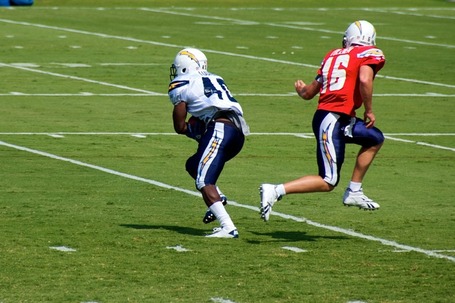 Jordan Todman was underwhelming. Might be rookie jitters, might have been bad blocking, but he certainly didn't shine today. He had trouble getting to the outside, and he had trouble finding running lanes initially. Although towards the end of practice he was able to break a few runs up the gut. And apparently Tolzein can levitate … or at least it appears that way in the photo above.

Cason looked good … at everything 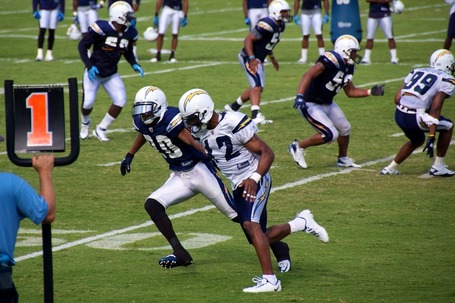 He looked great in coverage, and very good fielding kicks.  This guy is gonna be special.

On the outside looking in 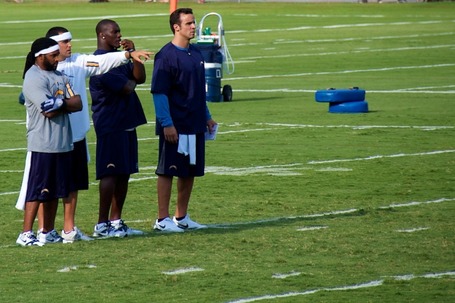 This was great to see and this was happening ALL practice. These four stayed together and followed the defense around all afternoon, sharing thoughts and ideas, especially Weddle and Sanders. That guy with the short hair is in fact, Travis LaBoy. Apparently he cut his hair and donated it, according to Annie. I'm excited about this group joining the defense. And yes, Spikes' neck is even bigger in person.

So, I'm not sure who's genius idea it was to decide that free agents can't report to training camp until a week after most camps are started, but it doesn't seem smart. On the bright side it gives the coaching staff time to assess their younger guys. On the not–so–bright side, all of the newly–acquired free agents will be joining the team on the field roughly 7 days before the first preseason game … that's not so good.

The new QB in town 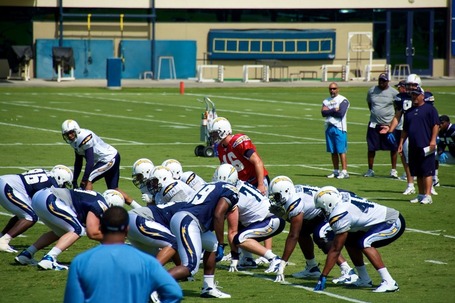 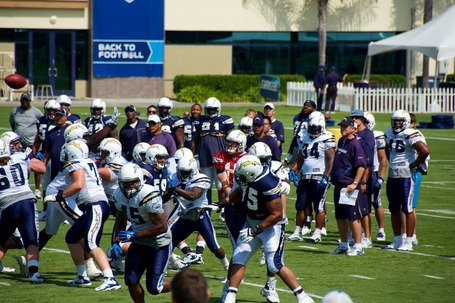 I'll tell you what, this kid learns fast.  He was zipping the ball all over the field today and making some impressive throws. The only incompletions I saw were dropped balls or receivers running incorrect routes.  He also had a beautiful pass on an out route in which he placed the ball perfectly over the corner and dropped it in to his receiver before the safety could get there.

Well folks, that's about it for today.  Lots of thoughts, some good, some not so good, some forgotten, but nothing to worry about.  It's going to be an exciting season.  Hope you enjoyed it!

(EDIT: Almost forgot my AJ sighting...almost didn't recognize him without the Tommy Bahama