Opening the Books on the 2011 Chargers

Share All sharing options for: Opening the Books on the 2011 Chargers

The current Chargers roster was heavily shaped by looming labor unrest.  There are currently 49 players under contract (see complete list at the end) to go along with seven players the team drafted.  Of the 49 players under contract, twelve are under "reserve/future" contracts which make them highly unlikely to make the team (doubly so in a lockout shortened off-season).

There are also a few candidates for the moniker of "salary cap victim."  Jyles Tucker is set to make $1,000,000 as a reserve special teamer, with Donald Butler and Jonas Mouton nipping at his heels.  The final and official draft bust of Buster Davis is expected sooner than later, despite his relatively cheap $840,000 salary.  Donald Strickland is slated to make $765,000 as a nickel back, but Marcus Gilchrist and Shareece Wright were drafted right on top of him.  As Neoplatonist Bolthead pointed out, the team still has two Long Snappers under contract for 2010; David Binn ($1,100,000) and Mike Windt ($405,000).  I think it's safe to say Windt will report to Chargers camp with the goal of finding a soft landing spot elsewhere.  Only one of either Kris Wilson ($765,000) or Kory Sperry ($480,000) is likely to stick with the team as the third TE.  Everyone else under contract is either super cheap, or well worth their 7 figure salary. 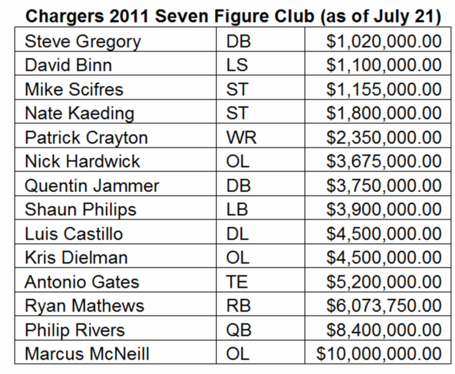 If we take my assumptions above, we're left with 32 players under contract and likely to make the team, with $66,503,750 owed in salary for the 2011 season (ignoring bonus proration).  If we then assume every draftee makes the team (not probable, but more likely in the shortened practice time), we're left with 14 opening day roster spots up for grabs in the upcoming free agent frenzy.  My current understanding of the 2011 salary cap is that it will be at $120,000,000 with a 90% floor at $108,000,000.  Between signing those draftees and free agency, AJ has roughly $48,000,000 to spend on additional 2011 salaries (again, ignoring signing bonus proration). 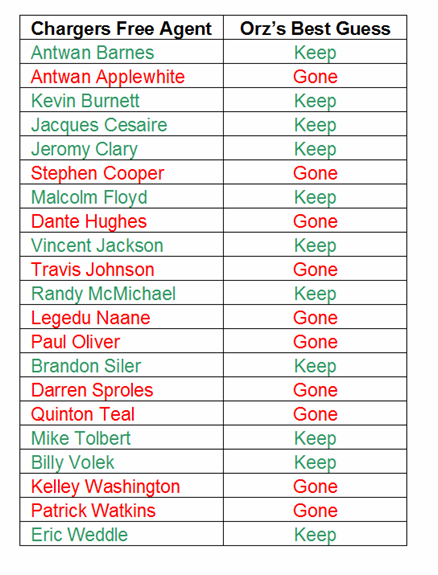 If we use Orz's Best Guess above, eleven of the fourteen available roster spots will be filled by returning Chargers.  Add in Bob Sanders joining the bolts, and we have roughly 2 roster spots available for undrafted free agents and unrestricted free agents from other teams.  Not much room huh?  Even if the draftees were to make $5,000,000, we're left with $43,000,000 to spread around in free agency, that's roughly $3,000,000 per remaining roster spot for 2011.

Current Chargers Under Contract or Drafted