Who Does Los Angeles Belong To?

Share All sharing options for: Who Does Los Angeles Belong To?

The other day I was listening to a Jim Trotter interview on the radio and, besides being surprised by what his voice sounded like, was struck by an interesting point that he made. To paraphrase, Jim pointed out that the Chargers and Raiders both currently consider Los Angeles to be part of their NFL territory and said that both teams will demand some sort of compensation from the NFL for having that territory taken away from them if another team moves in.

There are legitimate legal points to be made here. The Chargers and Raiders would lose a chunk of their respective audiences, because a more local franchise would be around to steal the allegiance of Los Angelites (Los Angelesians? Los Angelans?) and the new team would have the benefit of their games being on local television every week.

From what Trotter was saying, I was under the impression that Southern California television rights were and are split evenly between San Diego and Oakland. This may not be entirely true. Join me after the jump to look at some pretty pictures that will help explain my point. 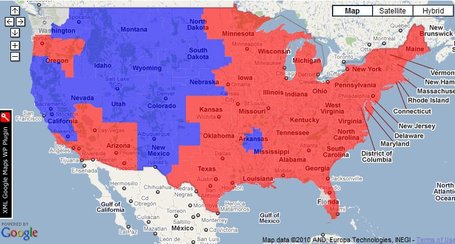 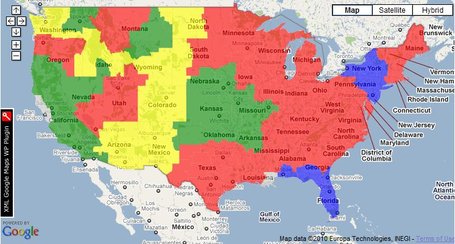 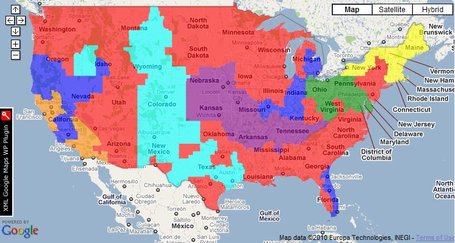 Week 16: Also known as the day the Chargers fans will complain about until they make the playoffs again. The Chargers, whose playoff aspirations were being held by just a thread, were having their beating at the hands of the Cincinnati Bengals televised. The Raiders were in a similar situation, needing to beat the Colts and for the Chiefs to lose to the Titans to set up an AFC West Division Championship Game in Week 17 that would've been awesome. The Colts, unlike the Bengals, were actually good and were battling with the Jaguars for the AFC South division title.

The orange in the picture is Chargers/Bengals. The blue is Raiders/Colts. This pattern is actually not uncommon when the two teams play simultaneously. The Chargers get below Santa Barbara and above Salinas, roughly, while the Raiders get Bakersfield, San Luis Obispo and Fresno. Even though the Oakland game had the bigger commenting team (Gumbel & Dierdorf vs. Johnson & Tasker), San Diego still got the city of Los Angeles.

I think Trotter had a great point, and I think this is a tremendous bargaining chip for the Chargers should the Vikings, Bills or Jaguars move to the city of angels. Dean Spanos can turn to the league and basically say "You just shrunk our fanbase, so now you owe us." If they want to put a dollar sign after that they can. Al Davis certainly will when he files a similar complaint, and both owners will probably have it in their minds to use money from that lost territory to build a new stadium at home and try and make that money back.

Will it work? Who knows. However, between Alex Spanos not wanting to sell his share of the Chargers and the idea that the Spanos family might actually get paid a large sum of money should they stay in San Diego and someone else moves to Los Angeles, it is seeming like a better (and more-likely) deal that the Bolts remain in San Diego and end up with that Petco-Park-adjacent downtown stadium.