Chargers Stadium Ideas: The One, The Only, The Q

Share All sharing options for: Chargers Stadium Ideas: The One, The Only, The Q

Over the last few days, some hope that the Chargers might remain in San Diego has cropped up.

First, Jeff's stadium article did a great job of pointing out that Alex Spanos is unwilling to sell is share of the team. AEG, the main company behind the NFL football stadium in Los Angeles idea, is dead-set on becoming part-owner of whichever team inhabits their stadium. I even found this in an L.A. Times article from a few weeks ago:

Leiweke said persuading a franchise to relocate — while allowing AEG billionaire Philip Anschutz to become a part-owner — is simpler than striking a deal with the city.

So it's pretty obvious that a huge part of moving to L.A. involves something that the Chargers are simply unwilling to do. That's good news for fans.

The second issue, and the one addressed in that article, is that the L.A. stadium idea is running into roadblocks outside of ownership. If I'm understanding correctly, the big issue is that to build the stadium AEG is asking for $350 million in bonds from the city of Los Angeles. Being that there have been more than a handful of L.A. NFL stadium projects that have started and then died, the city and state are broke, and as of right now there is no NFL team willing to commit to L.A.......the taxpayers are a little wary of the idea of handing that money over to AEG.

So I started thinking: Everyone wants a new downtown stadium, but in those conversations everyone knows the hassles of building one. Parking and regulations and more expensive construction and court battles, etc. It will be Petco all over again, but much worse because of a down economy. Not to mention the cost of tearing down Qualcomm. Wait....what about Qualcomm?

The talk of renovating Qualcomm Stadium was brief and mostly passed over, by both the team and the fans. Why? It's not a sexy idea, because the Q is not a sexy stadium and it does not have a location as sexy as downtown. Here are things it does have though: Lots of space, a central location and a stadium that's already there. So allow me a moment to try and make this idea seem sexy. 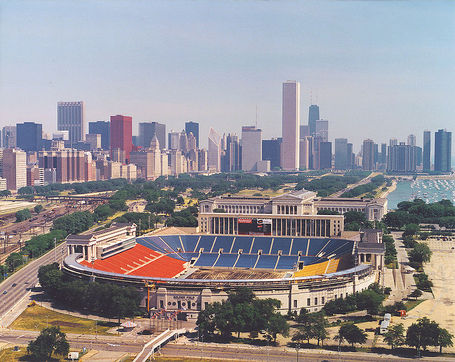 To call this a football stadium seems like a joke, but this is the home of the world champion Chicago Bears of the 1980s and remained mostly the same until renovations in the early aughts. (Editor's Note: This seems incorrect. I feel like they had to add more seating for the 1994 World Cup to be played here, but can't find any solid evidence of that.....yet.) 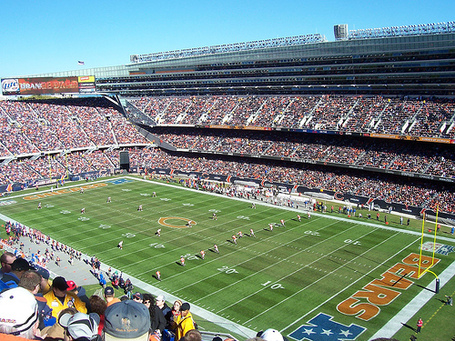 Soldier Field today! Instead of paying $600 million to get a new stadium, the Bears put that money towards their old, rich-in-history stadium and probably saved themselves a lot of paperwork and hassle. In reality, they couldn't have built a better stadium than this if they started from scratch and now they don't have to worry about outer-stadium things like parking, transportation, etc. because those things were worked out decades ago. 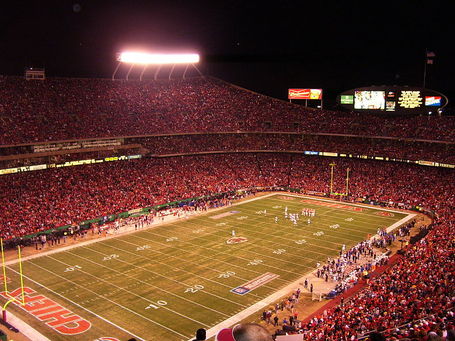 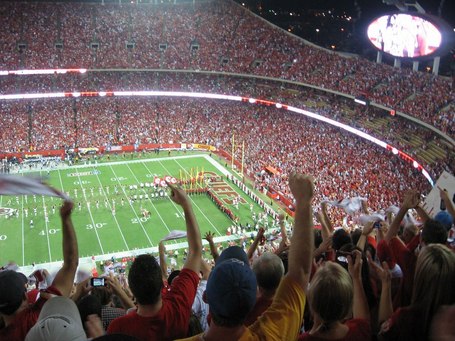 I know, it's not the dramatic change that Soldier Field had in terms of looks. $375 million in 2008 doesn't exactly go as far as $600 million did in 2001, I suppose. Also, a lot of the renovations done were dealing with the guts of the place instead of the field or seats. Our hated rivals over at Arrowhead Pride did a fantastic job of detailing the renovations in March, April, May and June of 2010. 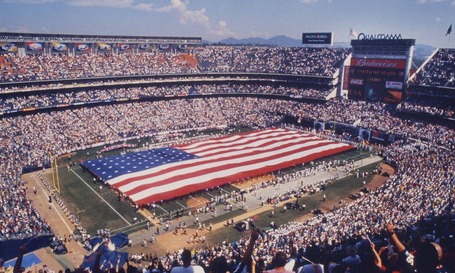 The Chargers home stadium is 3 years older than the Chiefs' Arrowhead Stadium, and has remained relatively unchanged since 1998 when it became the only stadium ever to host a World Series and a Super Bowl in the same year. Here are some of the issues the fact the Chargers in trying to stay at Qualcomm: 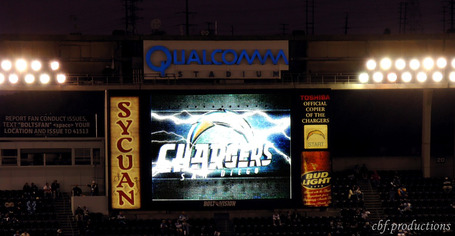 And the Q's "main" scoreboard isn't much better. 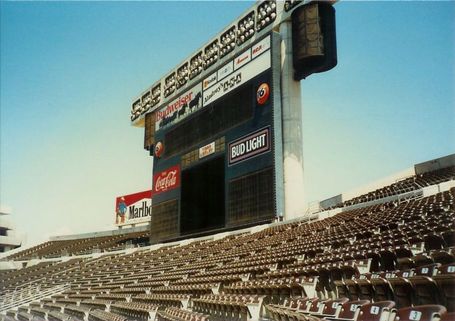 Someone give that poor thing a hug before it gives into temptation and starts smoking Marlboros and drinking Budweiser/Bud Light. 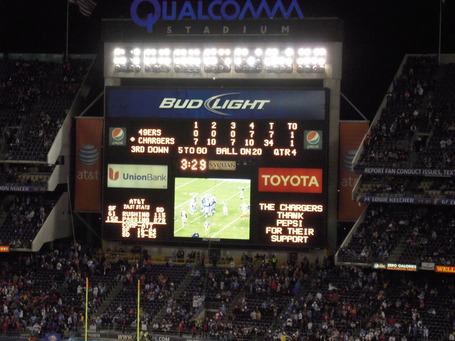 Aww, thanks Qualcomm! Now the scoreboard looks warm and cozy, although it would probably prefer a screen larger than most people's TV at home. Anyway, back to the bullet points! 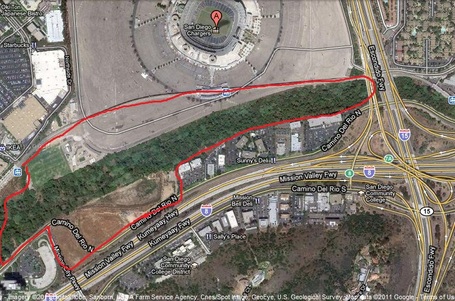 See the area I highlighted in red? That's the part of the parking lot south of the trolley tracks, then a bunch of green stuff that nobody cares about, the "mini field" where people sometimes play rugby, and what looks like a dirt field that would be perfect for a third entrance into Qualcomm and the main entrance into "The Shops at Qualcomm Stadium".....or "Jack Murphy Shops" if you prefer.

Okay, so you're taking away parking. What you're adding, however, is more reason for people to use the trolley. You can also re-do the trolley stop, since it wouldn't have to be rail-thin anymore, with some sort of system that allows for more than a single-file line to get back to it. Or not. You can also add a parking garage or something like that to the mix. Somewhere by the shops, with a strict "no tailgating" policy. It could work.

I understand that this is a little crazy, but it also makes a lot of sense. Save a little money, use a spot that you know works, and get all the things you want. Now the city's offer to the team involves the ownership over property that they can rent out, just like they've wanted all along. Plus, with some sprucing up, Qualcomm Stadium wouldn't be so bad. Right? Right? Ah, it was worth a shot.