This is a selection based on value, so value will be focused on in great detail. Be ready for me to toss random facts at you like "Of the 35 other players drafted in the same round as Shaun Phillips, only 14 are still in the NFL."

I would also make the point of showing you which players the Chargers drafted before and after Phillips in the 4th round to try and show you what a steal he was, but all that would do is outline maybe the best draft of all time. You want to see it anyway? Well, okay.

Oh, wait. First, I forgot, I'm supposed to be giving a shout out to our sponsor Bud Light. "Bud Light, it'll get you drunk!" Now, back to the draft. 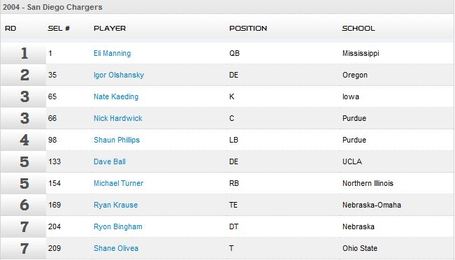 My goodness that's a good draft. Out of it they got two potential Hall of Fame players (Philip Rivers and Shawne Merriman, traded along with the Nate Kaeding pick from the NYG to SD for Eli Manning), and at least 6 other players of "starter quality" (Igor Olshansky, Kaeding, Nick Hardwick, Shaun Phillips, Michael Turner, Shane Olivea).

Think about that for a second. A.J. Smith started the day with 9 draft picks. He ended the day with 8 "starters" and 2 potential Hall of Famers. That has to be the greatest draft of all time. I can't imagine any draft ever being any better....and maybe that's why the bar has been set so high for Smith's drafts. He set it high himself with the best draft ever.

Anyway, back to Shaun Phillips. Here are the draft picks taken before and after him:

Exactly. Do you see how hard it is to find starters, much less Pro Bowlers, in the 4th round of the NFL Draft? Let's pretend for a second that Jared Allen wasn't taken in the same round as Phillips (about 20 picks later), and it's even more amazing.

Here's an average season for Shaun: 60 or so tackles, 8.5 sacks, an interception (maybe with a TD?), about 5 defended passes and several forced fumbles. Oh, and impeccable health. That's what he can be relied upon for. Those numbers, which are already "fringe Pro Bowler"-worthy, and 16 starts a year.

The first time I talked to Shaun, I made a point to tell him that I thought he was the best all-around 3-4 OLB in the league. I know, it's unprofessional. I made myself out to be a fanboy. It was terrible, but I still think that. Shaun is an excellent pass-rusher, maybe an even better run-stopper and quite possibly the best coverage 3-4 OLB that has even started in the NFL. He's unbelievable, and his talent (and stats) tell me he should've been a first-rounder. Here's his career stat line:

The reason I have him ranked higher than someone like LaDainian Tomlinson is because he's turned out to be a player at least 3 rounds better than where the Chargers got him. That's not good value, that's tremendous value.

Also, and I'm purely putting this out there to play with your imagination, Phillips' athleticism and great hands lead to him playing TE in goal-line situations during his college career (Mike Vrabel-style). He caught two touchdown passes this way. Could he maybe become an offensive threat as well? No, probably not.

Shaun Phillips is signed to a very reasonable contract to stay with the Chargers through the 2012 NFL Season.

Are You Smarter Than The Experts?
Correctly predict the first 32 picks of the 2011 NFL Draft and you’ll win $10,000,000!
BEST ROUND EVER IN PRIMETIME
Enter at facebook.com/BudLight
Here We Go