Stadium Thoughts and Musings: Maybe, finally, we're onto something!

Share All sharing options for: Stadium Thoughts and Musings: Maybe, finally, we're onto something!

According to an article in today's San Diego Union-Tribune, and following a closed door meeting among several of San Diego's business leaders, Mayor Jerry Sanders seems interested in bringing a version of LA Live to San Diego.  The obvious conclusion that Mayor Sanders reached was that a football-only facility for the San Diego Chargers could not be sold as a good public money investment.  I have just one question.

What the hell took so long?!  More below the jump...

According to the Mayor's talking points memo, we see for the 1st time any mention of a sports/entertainment complex in downtown San Diego.  As stated above, the obvious model would be L.A. Live.   It's the 1st real indication that city government understands the following issues:

Interestingly enough, the San Diego Convention Center is trying to kill the idea of a sports/entertainment complex possibly helping to augment the amount of convention space.  Steve Johnson, a spokesman for the Convention Center took to twitter with the following statement:

I would like (Chargers' Special Counsel) Mark Fabiani to stop trying to tie the Chargers stadium to a convention center complex. not happening and doesn't work.

To be perfectly honest, this smacks of the Convention Center trying to make sure that it's upcoming $700 million expansion is not totally or partially derailed by the presence of a downtown stadium.  In this article, it seems apparent to the writer that the Convention Center views a new stadium as a potential rival, not partner.  It's also eerily reminiscent of the Chula Vista fight between Mayor Cox and Councilman John McCann - with the ultimate result that neither a convention center or stadium was built in South Bay.

It is incumbent upon all parties involved to work out an agreement here, before turf wars scuttle both projects.

Most importantly, in my mind, the article addresses an idea that Fabiani has been floating for some time - using the existing land assets of the Qualcomm and Sports Arena sites to pay for the public side of the stadium.  Because of the economic hardships in San Diego, I think this would be the only real possibility.  If used, the financing might work out something like this:

Naming Rights Deal: $175 million - based on a 1/4th estimate of the AEG deal with Farmers Insurance, and/or adding inflation to the $154.5 million deal made in 2006 that provided naming rights to University of Phoenix Stadium in Glendale, AZ. 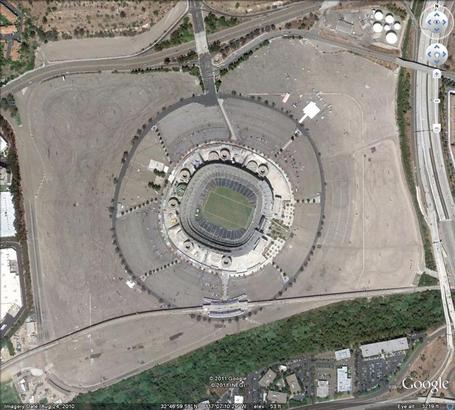 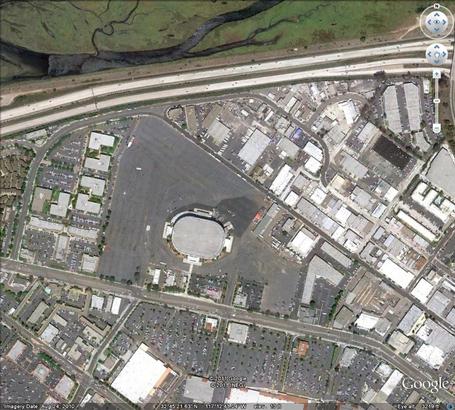 The Qualcomm and Sports Arena sites have to be sold at top value, both to reduce the public cost and to avoid any hint of private arrangements made to sell city land at reduced cost.  It also avoids (or significantly reduces the need for) using redevelopment dollars that could be better used elsewhere - that is if California doesn't prevail in its attempt to capture redevelopment money.

Further considerations to make... such a project has the possibility of working as a kind of stimulus plan for San Diego, considering 3-5 years of construction work at three different locations, plus the tax revenues generated at both the Qualcomm and Sports Arena sites - whether residential or commercial.

If nothing else, it appears that Mayor Sanders has finally realized that there's more at stake than just a football team.  There's an opportunity here to launch a major project that acts as a true public/private partnership, as well as enhancing San Diego's regional and national perception.