Contrary to what San Diego Chargers General Manager A.J. Smith will sometimes say, he typically drafts for a need on his team rather than picking the best player available.Sometimes that need is not as dire as other teams, so he doesn't need to take a starter and instead will draft for depth. Sometimes he's been in a situation where the team has almost no needs, so he drafts towards a future need (replacing Drayton Florence with Antonio Cromartie).

This season, there are some real needs on the San Diego Chargers. Even if the offseason goes according to what appears to be Smith's plan, the team will be running out a new starter at Defensive End, Middle Linebacker and Outside Linebacker. That's not to mention that they'll also have to replace Darren Sproles' spot as the team's 3rd Down Running Back and Kick Returner.

To try and figure out who the Chargers might pick, we should first make a priority list. Which position is most important, and which has the least depth.

I did this a few weeks ago. The Chargers are going to need to add at least one Defensive End. Unless they're completely happy going with Vaughn Martin as the starter and having just Ogemdi Nwagbuo as the backup for both DE positions (where they've gone with a rotation to avoid injury the last couple of seasons)....and I don't think they are. I think they're heading into the draft with the idea of getting a new starter opposite Luis Castillo for 2011.

Perhaps not as pressing. Donald Butler should be healthy and ready to go whenever football is back, and the Chargers were all but ready to announce him as the eventual starter before he got injured in training camp. They are really high on him, and if Brandon Siler had to get some time on the field it wouldn't be the worst thing in the world.

If I had to take a guess at what would happen here, I'd say Kevin Burnett is retained and Butler starts next to him. Siler and some veteran free agent MLB (Takeo Spikes?) serve as backups. It's too bad Tim Dobbins is not a free agent, he'd be perfect.

Again, we went over the depth a few weeks ago. As was the case with Buster Davis and the WR group for so many years, the response to seeing the depth here is usually "It'd be alright if Larry English broke out." Still, they're much better off than the DEs. Each guy there has starting experience (as opposed to Vaughn Martin), and Antwan Barnes and English have potential to fill the hole at this spot.

Can I see the Chargers making a play for an OLB in later rounds? Sure, because any time you can improve the pass-rush that way it helps your team. However, I can't possible see them picking anything but a DE with their first-round selection considering the lack of DEs on the roster and on the free-agent market. I think the plan will be to strengthen the defensive line, and hope Greg Manusky has some crazy blitzing schemes to get pressure on opposing QBs.

J.J. Watt out of Wisconsin or Cameron Jordan out of Cal both seem like solid selections at #18, and both seem to have the talent to step right in and start. Give me a second to flip and coin and..... 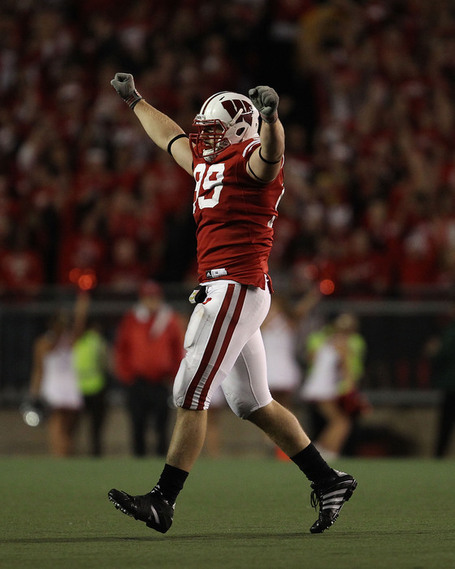 J.J. Watt is your winner. (Photo by Jonathan Daniel/Getty Images)