Share All sharing options for: Visualizing the 2010 Chargers Roster

One of the products of my 2010 Salary Analysis was an accounting of week by week roster changes using NFL Gamebooks.  In total, there were 77 players that put on a Charger uniform this year.  Of those 77, there were only eleven players that started every game.  Three of the four defensive back positions (Weddle, Jammer, Cason), and all three of the defensive line positions (Cesaire, Garay, Castillo) where anchored by 16 game starters; which explains why those two position groups were the team leaders in terms of stability and production.  There were also 33 gentlemen that stuck on the roster for the full 16 games (including IR time), leaving a remaining 33 players who either were cut, or came in via the street or the practice squad.  After the break, we'll take a look at some of the trends within positions groups - with none more fascinating than the infamous special teams train wreck.

Key (if you haven't already figured it out) : S = started, A = on active roster, I = inactive,R = injured reserve, blank = not on roster 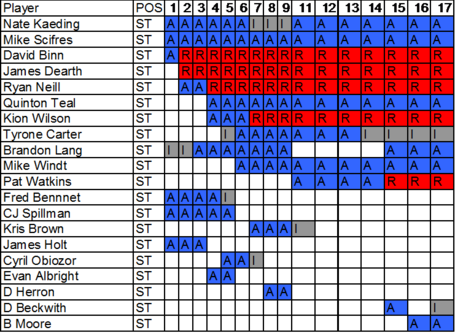 Looking at this graphic, it's not hard to see why the Chargers 2010 special teams were such a problem this year.  Between the injury to Nate Kaeding (requiring the temp job for Kris Brown), the long snapper mess, and the inability of young backups to make plays, this group had a ton of turnover.  This view of the group makes it really obvious that the gambles on Fred Bennet, CJ Spillman, and James Holt didn't pan out as journeyman special teams specialists such as Quinton Teal, and Pat Watkins (and Kelley Washington who I counted as an actual WR) were brought in.  It will certainly be interesting to see how the team will act to prevent this kind of thing next season.  Can David Binn be trusted to stay healthy and get down field at his advanced age?  Can a new wave of young backups take the reigns, or will there again be a need for roster spots to be eaten up by specialists?

Moving on to the wide receivers, we can see some pretty incontrovertible proof that Philip Rivers makes the receiving core, and not the other way around (pay attention VJ!).  The team maintained a top flight passing offense with a patchwork of pass catchers.  Expected and unexpected problems such as the Vincent Jackson holdout, the draft bust of Buster Davis, and a rash of injuries (Floyd, Naane, Gates, Crayton) arose.  The team was pretty lucky (or maybe just prepared?) to have Seyi Ajirotutu, Kelley Washington, and most especially Randy McMichael waiting in the wings.  Goodman and Banks both got their shots, but simply weren't up to the challenge.

The defensive line was an interesting group to examine.   They had great consistency from their starters, and also showed a very orderly transition in the back of the rotation.  Notice how every single lineman in this group was present in week 1.  No one had to be brought in off the street to fill holes in this group.  The veteran reliability of Travis Johnson and Alphonso Boone slowly gave way to the youngsters Vaughn Martin and Cam Thomas.  This is the template AJ is probably gunning for every year at every group.

The linebacking corps shows the instability of other groups, with four players finishing on Injured Reserve, but also shows front office preparation for problems in that only Antawn Barnes was brought in off the street.  Antawn Applewhite was never intended to start that many games (and was one of the special teams problems because of it), but both Plan A (Merriman) and Plan B (English) at OLB opposite Shaun Phillips didn't work out.  Jyles Tucker and Donald Butler's season ending injuries obviously both blew a hole in AJ's template at LB as well.  Doesn't it seem as though Cooper and Siler's lines look backwards?  Cooper only sat out 4 meaningful games, but it felt like a whole lot more.  Siler may have finally and firmly grabbed that starting job BFTB was looking for him to take if he hadn't been hurt in weeks 5-9.

The running back chart confirms everything we remember.  No one was really hurt much, no one really jumped out and put the team on his back.  The team here was simply prepared for a platoon situation and that's how it played out.

This view of the defensive backs really only points out what a rough year Steve Gregory had.  He played his heart out those first four weeks, then got suspended, then injured, then he got replaced by Bob Sanders in the off season.  Oliver was a steady part time starter while Hughes and Strickland reliably held down the nickel and dime duties.

There is simply not much to say about the quarterbacks.  Yay for El Capitan.  It looks like that third QB spot was a victim of special teams roster needs.

Starts for offensive skill players are a little funky, because the package and play call of the first snap determines who the starters for the game are.