Closing the Books on the 2010 Chargers

Share All sharing options for: Closing the Books on the 2010 Chargers

During this short lull between the lockout drama and the upcoming draft/free agency binge, I wanted to take one last look at the 2010 Chargers season by putting the focus on exactly where the money went.  Well, it turns out Kevin Acee already did just that in January.

According to Pro Football Talk (using numbers from September 2010), only eight or nine teams spent less than the Chargers last season.  Some of the top spenders in 2010 included the Resdkins ($178 Million), Cowboys ($166.5 Million), and the Vikings ($143 Million); all of whom missed the playoffs.  The top spenders in the playoffs were the first round loser Saints ($145 Million) and the losing record Seahawks ($139 Million).  The super bowl entrants spent $135 Million (Packers) and $123 Million (Steelers) on salaries.  The context I'm trying to establish here that the Chargers were not exactly big spenders relative to the rest of the league, but big spending doesn't guarantee anything (especially if Dan Snyder owns your team!).

After the break we'll start dissecting the numbers in the Acee article linked above.  We'll look at who took the most money without performing, and where the biggest roster values were.  Maybe some of these financial realities will influence the team's 2011 off-season moves.

The full list of 2010 player salaries, including pro-rated portions of signing bonuses (aka the "cap number") is included at the bottom.  Of the 75 players that actually suited up, the average compensation was $1.45M, with a whopping $2.1M standard deviation.  For once, a median is actually an interesting statistic in this case, with half of the salaries totaling above or below $630k.  As you may have expected, this means that there were a handful of highly paid superstars, and a bunch of other guys just doing their best to hang on.  Let's start off by looking at the money distribution by position group: 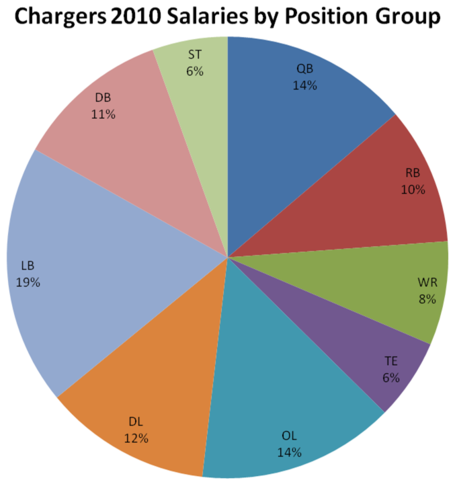 To start off, I have no idea what this chart should look like under ideal conditions.  It's hard to compare apples to apples here without also tracking the number of players on the field for that group.  Assuming I can avoid the wrath of John and still be writing here in 12 months, I'll definitely compare 2010 to 2011.  We can imagine a bizarro 2010 off season where Marcus McNeill and Vincent Jackson either signed their tenders, or were offered market value contracts; which would have caused the Offensive Line and Wide Receiver groups to take up a bigger slice of Dean Spanos' paycheck pie.

The Linebacking corps jumps out as taking up a lot of salary; it has four players on the field for most snaps, and also had a lot of high salary veteran players (Burnett - $2.9M, Cooper - $3.2M, Philips - $4.6M) while carrying a lot of dead weight (Butler, English, Merriman) in terms of salary-to-production.  Some of those vets and dead weight will certainly not be earning pay checks in San Diego in 2012 (with Merriman having already been shipped out).

I think it's safe to say the team got a really great deal from it's DB's this past season.  With only Quentin Jammer earning big money ($3.9M), this group took up a smaller chunk of the salary space while also carrying the salary burden of a lot of pure special teams players.  Paying Eric Weddle, bringing in Bob Sanders, and keeping everyone else will change the face of 2012 DB salaries for sure.  Owing to suspension and injury of Steve Gregory ($612k) the snap king of the sub-million club for the entire team was Paul Oliver ($652k) with 713 defensive snaps played.

The D-line was populated by Luis Castillo and a bunch of cheap labor. It's no wonder that Castillo takes such a beating in public perception.  Boone is gone, Cesaire and Johnson are likely gone, and the rest probably need a raise! 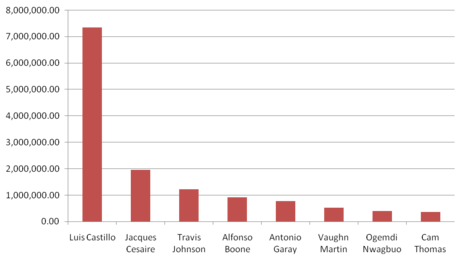 Here's a look at the top 15 salaries on the team this past year: 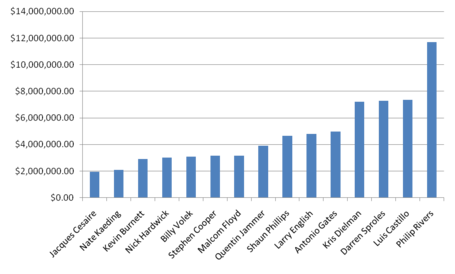 Sproles and Larry English jump out as the top contract underperformers - but neither was a total waste or devoid of on the field contributions.  I'd call out Shawne Merriman ($1.53M), Buster "Bust" Davis ($1.5M), Jyles Tucker ($1.37M), Alfonso Boone ($919k), and J.T. O'Sullivan ($755k) as the biggest money takers that didn't perform.  Honorable Mention must unfortunately go to Billy Volek ($3.1M) and Scott "Mooch" Mruczkowski ($1.4M) for being valuable insurance policies that ever had to be cashed in.  Nice gig if you can get it!  Don't get me wrong, I am not calling the work ethic of any of these nine gentlemen into question; just pointing out that money was paid and there was very little on the field return on investment.

My top five value players for 2010 were Ogemdi Nwagbuo ($395k), Quinton Teal ($449k), Mike Tolbert ($470k), Tyronne Green ($497k), and  Antonio Garay ($780k).  OG and Garay were mainstays of the defensive line rotation while Green soaked up significant playing time behind the two starting guards.  Quinton Teal only led the team in special teams tackles after being brought in after week 3, during the special teams roster purge.

Can you find anything else worth mentioning, debating, or agonizing over?