Share All sharing options for: Stadium Thoughts, Musings and Nightmares... an LA Story

As a San Diegan, I currently have a love/hate relationship with Farmers Insurance. On the "love" side, last year the company rescued the annual golf tournament at Torrey Pines, and enjoyed a dramatic finish in this year's Farmers Insurance Open. On the "hate" side, Farmers Insurance reached a mega-deal with with Anschutz Entertainment Group (AEG), for the corporate naming right to AEG's proposed downtown football stadium in Los Angeles.

No matter how you cut it, this is potentially very good news for people in Los Angeles who want football back, and potentially awful news for those of us who want to keep the Chargers in San Diego.

Below the jump, I will get into some details, post some pictures and links, and offer some bits of conjecture.

What Does this Mean for Los Angeles?

AEG has proposed a new stadium to be built next to the Staples Center in downtown Los Angeles (LA). This new stadium would end up costing an estimated $1-1.5 billion, and would include a renovation of the LA Convention Center, which sits next to the proposed stadium site. This would be paid for privately, excepting $350 million in bonds to renovate the LA Convention Center.

You can view some additional images and video of the proposed "Farmers Field" at AEG's Farmers Field website. 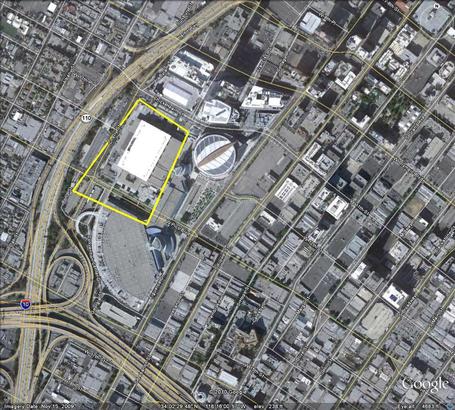 General area of the proposed Farmers Field. Staples Center sits to the right.

The agreement AEG president Tim Leiwike announced on Monday was significant for more than a few reasons. First, the deal with Farmers Insurance would give them naming rights to the stadium (Farmers Field), in exchange for $600-700 million over the next 30 years. It illustrates that there is a major groundswell of corporate support for this project, as well as some significant political support - headed by LA Mayor Antonio Villaraigosa.

The end result of this recent news has lead to 3 new developments from the LA City Council - with the caveat that no public money go directly into the project (click here for a recap by the Los Angeles Times).

Furthermore, the significance of the naming agreement with Farmers Insurance cannot be overestimated. First of all, this is a naming deal that obliterates every other similar arrangement in memory. To give you two examples, Qualcomm paid $18 million for the naming rights to then Jack Murphy Stadium in the mid-90's, a decade later, University of Phoenix acquired the rights to the Arizona Cardinals' stadium in Glendale, AZ for $154.5 million over 20 years.

However, the obvious question is how on Earth Farmers Insurance expects to make money with this deal? With that question in mind, you have to expect that Farmers Insurance is privy to some behind-the-scenes negotiations to increase the number of "high profile" events occurring at the new stadium.

Therefore, I feel reasonably comfortable assuming that the list below is likely to happen.

What this means for San Diego?

First of all, San Diego does not have near the corporate base, nor the drawing power of Los Angeles to swing this kind of naming rights deal, even if a new stadium is built. However, it does up the ante in terms of what the Chargers and/or the city of San Diego can ask for.

Secondly, there is no private developer that can build a comparable facility in San Diego, which means a massive public outlay of money, either from the general public, or through redevelopment.

Thirdly, redevelopment is under attack, both in San Diego and across California. First, the San Diego City Council is attempting to find out how long the deal was in place to extend redevelopment via a midnight rider in the California State Assembly. Second, new (old) Governor Jerry Brown has proposed eliminating redevelopment across the state as a means to reduce the state budget deficit.

Lastly, there is no possibility of the Chargers getting a loan from the NFL's G3 stadium loan fund until a new CBA is reached with the NFL Players' Union.

I think, beyond the obvious fear of losing our Chargers to Los Angeles, what annoys me about this more than anything is that the city of San Diego could have been working on a deal like this for several years - with an NFL tenant in hand to anchor the project.

Based on San Diego's history as a city that acts like a beachfront resort community, the odds are in Los Angeles' favor.

Stealing is what Los Angeles does best. Just ask Cleveland, Minneapolis, Brooklyn, Oakland, San Diego, and the Owens Valley about it.