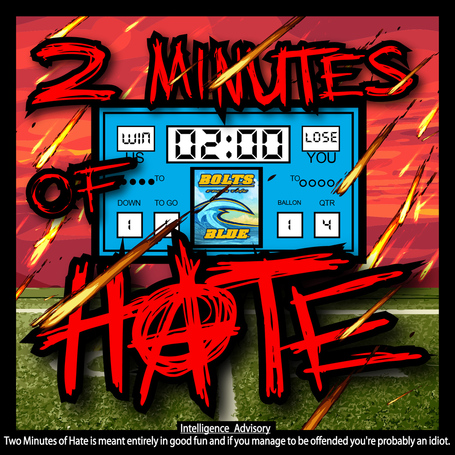 Oh, the Bills. The Buffalo Bills. Can we start by pointing out that this is easily the stupidest team name in all of professional sports? It may actually be the dumbest name in all of sports, but I'm going to limit my declaration to the pros to stay on the safe side. Let the Bills act as a reminder to other would be sports teams to not allow their name to be chosen by a naming contest lest they, too, be undone by their own version of Michael Doucas*.

Now, you might be thinking, "isn't that more of a reason to pity the Bills than to hate them?" I'd argue that it's not. If you're looking for reasons to pity the Bills, I would direct your attention to their four consecutive trips to the Super Bowl with zero rings to show for their efforts.**
I will grant that their stupid-ass team name isn't a great reason to hate them, but for great reasons we need to enlist the "help" of Chris Berman. I give you, "circle the wagons." I can't hear that tired line without wanting to put my fist through the television and I can't imagine I'm the only one who feels this way. Michael Doucas and the idiots who let him name the team couldn't have known that Berman would curse us with that line, but I submit that they should have known what they were doing was wrong and that even the unintended consequences would be sufficiently horrible.
On a more personal level, Fred Jackson's season-ending injury derailed my fantasy team and I think we can all agree that this was pretty inconsiderate of him and by extension the entire Buffalo Bills franchise. I even picked up C.J. Spiller thinking he might help, but he's been absolute garbage. If any Bills fans reading this would like to make amends you can feel free to chip in toward refunding my fantasy league's $20 buy-in.
Also, I'd be remiss if I didn't mention that Buffalo stole away Buddy Nix from my beloved San Diego Chargers and I can't help noticing that their drafts haven't been as good since he left. And even with Buddy at the helm, they still suck enough that I'm worried they'll lose to San Diego this weekend further damaging their draft position. So, I have to ask, "what was the point? Was this purely an attempt to damage the Chargers?" I feel like it almost certainly was and I'm not sure what we did to deserve it.***
Finally, what's the deal with playing half of their home games in Toronto? Just move already and please petition the NFL so that the games you played there are contested under CFL rules, so at least then there would be some novelty in watching your pathetic excuse for a team.
*Thank you to Wikipedia. F**k you to Mr. Doucas.
**Scott Norwood.