Greg Manusky opened up the game with an odd playcall: A double DB Blitz. Either he was absolutely sure the playcall was a run, or at least a playaction pass that would give the blitzers a chance for a sack/pass knockdown. It was unusual because I've always wanted to see a db blitz and the most I see is nickel blitzes or inside DB blitz on double wide sets. 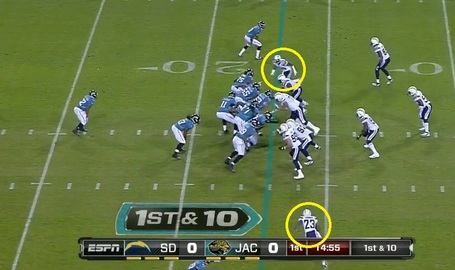 Pass defense wouldn't be an issue for the Chargers, however. Run defense is where the struggles happened. It's hard to defend near-perfect blocking when you're in a wide, light nickel defense expecting pass up by so many points, but it's still aggravating to see it:

Didn't that aggravate you? Another fail was tackling and containment, again. About 75% of Blaine Gabbert's passing yards were gained after the catch. Hit the jump for more.

Let's take a look at a few more plays.

Donald Butler is a Beast

No, I'm not quoting myself. That was Jaguars running back Maurice Jones Drew who said it. MJD studies his opponent to ensure his own success, and when one of the better players in the NFL has to take consideration of another player, it means something. When he got hurt, I knew the Jags would start running up the middle and looking to attack the ILB's. They went right after Bront Byrd. 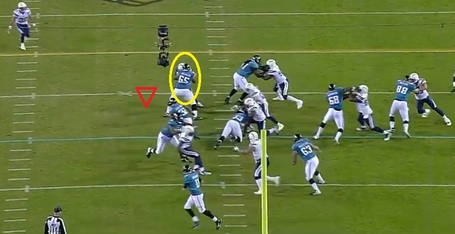 That red triangle represents where Donald Butler would have been had he not been hurt. It's accurate to within one inch, according to the pic sent by myself from the dimension where Butler didn't get hurt. Butler's ability also comes in to play on blitzes or spy plays. See below.

That was an incompletion due to him tipping the ball. These types of plays can lead to interceptions, which lead to other nice things, like victory. Let's move on now. It's time for a new segment called:

Good job: Vaughn Martin jumping up and going for a pass when he has the chance 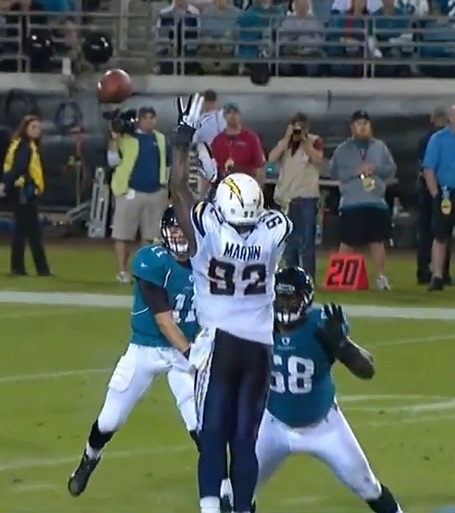 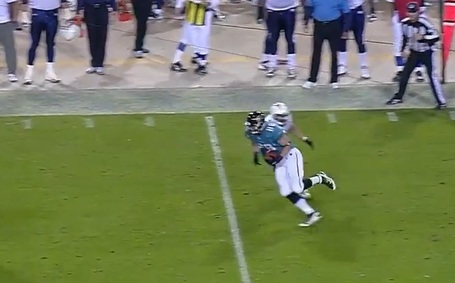 Aside from Donald Butler, I also continue to be impressed by Cam Thomas. Last year, he kind of moaped around and slacked off. He would jog peacefully across the field when a player from the offense was advancing the ball. This year, he gets his behemoth butt into sprint mode and chases as best he can. I like that. It shows desire, initiative and promise. 2 or 3 years from now I can see him starting at Nose Tackle or Defensive Tackle in the 4-3 John wants the Chargers to switch to. That's all for today. Leave any questions and comments below.