With the recent loss of Marcus McNeill and Kris Dielman for the season, it struck me that the Chargers had a ton of money tied up in those two guys alone. Then it hit me that the value of a player lost to injury to the team is probably pretty closely related to their salary; which could be used quantify the impact of their loss on the team. So I added up all the pro-rated salaries lost due to injury-related inactive weeks and time on injured reserve. This then leads to a calculated percentage of the roughly $120 million payroll (yes, this is a flawed assumption owing to signing bonus variables) lost to injury. If the result came to be a really large number, there might be a valid argument that Norv Turner isn't as much to blame as we all may think. If it came out to be a really low, then it would mean that the training staff is getting its name unfairly dragged through the mud (or maybe only high value players are getting hurt). AJ Smith is screwed because he either hired injury prone players without enough depth, or hired healthy players that aren't performing.

So before you hit the jump, please pause and take a guess. What percent of the (roughly) $120 million Chargers payroll do you think has been lost due to injury so far this year? Keep in mind, we can count injured reserve salaries through the end of the season, but long term inactive guys like Luis Castillo can't be projected in that way.

Based on salary information from rotoworld, injured reserve status from the official Chargers site transaction log, and inactive player details from NFL gamebooks: the Chargers have spent at least $20 million on injured player salaries so far this season, blowing away 17% of their total payroll. This means that 83% of the payroll has been or will be suited up (or at least a healthy inactive) this season. It suddenly doesn't sound so bad does it?

The trio of Marcus McNeill, Kris Dielman, and Luis Castillo account for HALF of of the lost salary this season. The only big money guys to have been healthy the whole season. are Philip Rivers, Vincent Jackson, Eric Weddle, Nick Hardwick, and Takeo Spikes. With so few big money guys staying healthy, I was expecting it to be somewhere around 30% waste (which maybe it would get up to if it was easier to track signing bonus pro ration). Bonus points for admitting in the comments how far off you were!

Percent of $20M Salaries Paid to Injured Chargers in 2011 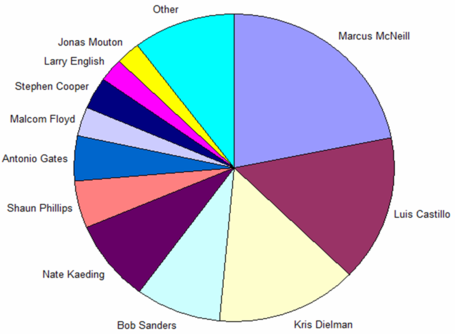