Share All sharing options for: Defensive Analysis - Chargers vs Ravens

The Baltimore Ravens by no means have a high scoring offense, but limiting them to 7 (10) points in game time is incredibly impressive. Of course, you have to give some credit to the offense for keeping RB Ray Rice's carries low by scoring every drive, but getting 2 interceptions and 5 sacks on QB Joe Flacco is impressive considering he is an elite quarterback. All sacks aside, this defense still needs help. Really.

The pass rush is still very inconsistent and the Strong Safety spot shared by Steve Gregory and Paul Oliver isn't doing Eric Weddle any favors. Na'il Diggs has been great in coverage and those rare 3rd down runs/draws/screens, but Takeo Spikes is not built to play the pass in open space. Despite all that, I think Greg Manusky has done a decent job of running the defense. Don't you? No? Well you also think Norv Should be fired and Castillo and Weddle are overpaid and Ryan Mathews is a bust. After studying each and every play, only about 20% of the time do I see an unsuccessful defensive play happen because of a bad playcall. It's usually execution, or lack thereof in some cases (pass rush). Still, they look like they're beginning to get things going and hopefully the next 2 weeks and beyond look like the last 3. Let's get into Sunday's grading and some very nice goodies after the jump.

Liked the video? Of course you did. Here's a great example of a not very good playcall by Manusky that could've been made better with an elite pass rush or better execution by the secondary (or a better playcall). 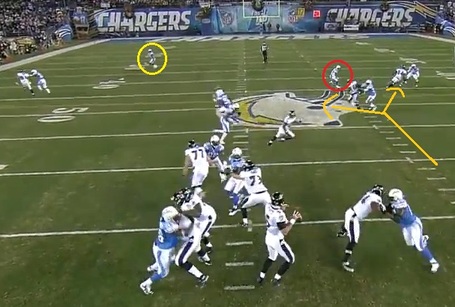 Just after the snap, notice how deep Safety Eric Weddle is (yellow). Cason was manned up on Evans running a go route, but he was leaving a big hole in coverage. In gold, notice the routes run by TE Ed Dickson and WR Anquan Boldin splitting coverage up over the middle. This would give Flacco an easy read to throw. If Safety Steve Gregory (red) stays high over Dickson, throw to Boldin, who would be open, because Hughes passes him off and takes the RB Ray Rice who could easily beat LB Na'il Diggs for a first down. If Hughes passes off his receiver and Gregory slips, or doesn't take him, which he did slip, and wasn't in position to begin with, Boldin will be open. He was, and got a big catch right into field goal range.

I don't know why Weddle was so deep, but I do know that Gregory left the middle of the field open for Boldin, and I'd rather have Weddle play lower because he's smarter at diagnosing plays. However, even if all those ideal things happened, Torrey Smith had 2 yards on Takeo Spikes when Flacco released the ball, and it's not like the pass rush was there yet...so yeah. The Chargers need a better pass rush (regardless of the 7 sack game).

The playcalling for this game was fantastic, and execution was just as good. Coverage was solid across the field and I liked seeing everyone play in a synchronized way. While the grading doesn't do the players' actual performance justice, they did fail a lot in pass rush and run defense, as noted by Ray Rice's stat line and Joe Flacco's moments where he had all day to throw. Luckily, a lot of the bad grading came in garbage time anyway.

That's all for now. Leave your comments and questions below, and be sure to rec if you enjoyed the article.