Share All sharing options for: Defensive Analysis and Review: Chargers vs Bills

The Chargers defense put a beat down on the Buffalo Bills. They effectively shut them out allowing only two field goal attempts; one of which was missed. The only touchdown the Bills scored was put in the end zone by the Buffalo defense and aside from blowing really hard to keep the ball Philip Rivers' fumbled out of the end zone, there wasn't much they could do about that. Well, that's not entirely true. They could match those points by scoring on their own and that's what they did when Steve Gregory picked Ryan Fitzpatrick (the second of three that he'd throw) and took it to the house.

Here's the grading for the first and second half (0 being owned and 1.0 being dominant):

In case you didn't notice, this wasn't written by Superduperboltman. Nope instead you get Wonko. I didn't even get to watch the game so I don't have a lot to add here. I was left with the following notes about the analysis from the guy who writes these articles so well:

The Defensive Analysis spreadsheet refers to a few "Figures". They are included in this wonderful video presentation.

There's also a nice picture that is mentioned in the spreadsheet with the following comment:

Garay needs to stop crushing linemen. If he had two guys to his left and right that could do it, fine. But he leaves a huge gap to run through. 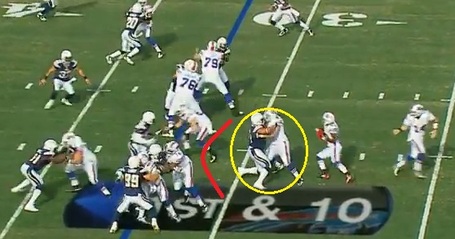 My own observation from Superduperboltman's notes is that he was incredulous about some of the plays Travis LaBoy was making. In a good way, for once. The numbers bear that out in his first half run defense and he had a couple great play in pass defense in that half.
Thanks for bearing with me as I tried to fill in. Hopefully I was as good as any substitute teacher you've ever had.