Two cliches apply big time this week. First, the definition of insanity is doing the same thing over and over while expecting a different result. Second, is that playing not to lose usually results in losing. Norv Turner continued his post Dielman/McNeill/Vasquez trend of super simple and conservative offense this week against the Broncos. As the game progressed and the pass protection broke down, he got more and more conservative and protection minded. This culminated in the two overtime possessions where the Chargers used "12" personnel on all but one play, and then meekly settled for a long field goal attempt after a nice 14 yard breakout run by Ryan Mathews. Kevin Acee argues that Turner simply had no choice but to go ultra conservative and quotes Norv legitimately placing limits on his makeshift offensive line.

"What we’re trying to do is put our players in a position where they can have success, where they can win, not try to ask them to do things they’re not capable of doing," Turner said. "… I know there are some questions about particular situations and calls, those are things that certainly go into every one of those decisions and sometimes it doesn’t look the best but certainly it’s with the intent of doing what’s best to give our players a chance to be successful."

"In a perfect world, yeah, you’d like to get closer," Turner said of the scoring chance in overtime. "We’re not playing in a perfect world right now. As I said, there were some matchups up front that were not in our favor and to have a negative play in the passing game and take us out of field goal range would not have been good ... You’ve just got to do what people are capable of doing, and you’ve got to do everything you can to keep from putting them in a bad position. We’ve had some real challenges in terms of the matchups we faced the last couple weeks, and at times we’ve been able to handle them and at times we haven’t."

I would propose that the offense could have done some things to counter the pass rush that was overwhelming the max protect plan. They could have run some screen plays to Mathews, or gone to much quicker three step drop passing. Remember that Norv's counter intuitive solution to a furious pass rush against the Raiders was less protection and a more spread out formation. Our own pass rush, working against Tebow, was sabsolutely petrified because of all the various actions and play fakes of the Denver offense. You can actually watch our OLBs slowing to a crawl while they looked into the backfield to make sure Tebow was still dropping back and hadn't already done something with the ball. Why can't we do that (other than Philip Rivers' sub par play faking)? Nick Canepa labeled Norv Turner as confused and playing scared while focusing on the last possession and last play of overtime:

And yet, in the overtime, after Mathews put them down near field goal range at the Denver 32, he mysteriously was relieved in favor of Mike Tolbert, who lost 4 yards trying to go wide. It might have been just enough for Nick Novak to barely miss what would have been a game-winning field goal.

"I’m calling a play based on personnel on the field," Turner said. "He came out and I don’t know why he came out."

If the head coach calling plays doesn’t know, who does? Maybe they didn’t want Mathews to get hurt.

Is it really possible that Canepa has no idea that Tolbert plays 75% of the third down plays and 95% of crucial third down plays because of his superior pass protection? It's very standard for this offense to yank Mathews for third down. It turns out that I learned something new from Jay Paris this week:

"I don't know why he came out,'' said Turner of Mathews, and if Turner doesn't know, who does?

Turner said running backs coach Ollie Wilson handles the substitutions, and well, that's about all the reasoning Turner had.

It's fascinating that an assistant coach controls when Mathews and Tolbert go in and out, and that Norv then makes his call subsequent to the RB decision. I always imagined that personnel, formation, and play call was all inside of Norv's beautiful brain. Obviously they are executing a coordinated philosophy, but it seems like there may have been a disconnect between Wilson using the standard formula of Tolbert on third down without knowing or realizing that Norv was going to call a field goal concession run.

The latest playcalling log is located here (just in case anyone does still actually care).

The good news is that as I guessed last week based on the first Broncos game, the offense got back to a balanced approach (47% run / 53% pass) this week and really established the run to the tune of 4.9 YPC. Is it really possible that Norv cut and pasted the game plan from their prior matchup against Broncos, and then just trimmed out anything the new lineman couldn't pick up? It's a bummer that such a healthy YPC didn't translate into more scoring offense because of the pass protection problems. There's slight concern about Mathews becoming a glaring run-tell once again. If I was a Chargers beat writer I would have asked what sequence of events brought Brinkley into the game for two plays. Fans of playbook confidential will note that Norv _totally_ reads this column and took my advice for more outside runs. The recently ignored right side run payed off huge this week. This might line up with the right side having the most actual starters (one-haha). "21" personnel had a monster run game this week. "11" runs were okay, but shotgun runs only had 2.8 YPC

"12" personnel was the super heavy in a super conservative game plan. We were back to using only four basic personnel groups the entire game. "11" fell way behind, and passing with a fullback (last week's fun new flavor of the week) was largely forgotten. Dear "10", "11", "20", "13", and "23": how have you been? I miss you. I miss us. Want to get together for coffee sometime?

Uh-oh. Despite their 3-8 record, the Jaguars have a very impressive statistical defense. Their rush and pass DVOA are both top 5, while only their raw yardage rush defense shows the slightest weak point. I can't wait for more max protect passing plays against a stout pass defense!

All VOA, DVOA, YAR and DYAR statistical values are developed, calculated and reported by Football Outsiders. Their explanation can be found here.

Norv: You're 4-7, you have nothing to lose...have some fun, get creative; or at least look at the back half of your own playbook! It's not like you personally really need to be concerned with Rivers' long term health...

What happened to this ("20" personnel with Mathews and Tolbert together and funky formations): 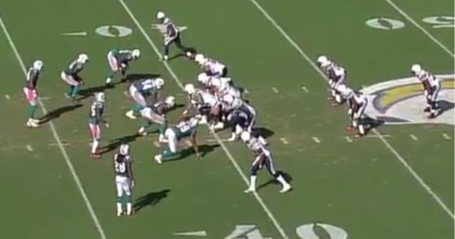 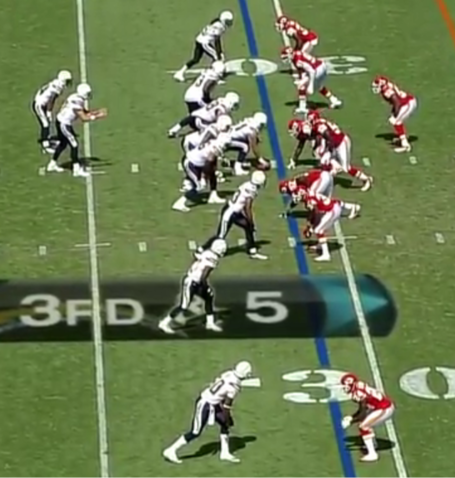 Or This (creative action and fakes that slows down the pass rush - that type of thing sure slowed our pass rush down this week):