Share All sharing options for: Defensive Analysis and Review: Chargers vs Broncos

If you had told me that the Broncos would only put up 13 points in regulation, I would have sworn the Chargers had won that game scoring 23 points. Like in any game, there were many fails on defense, but how much can you complain when they allowed just one Touchdown and 2 field goals? There were a lot of good things to come out of this performance but lots of bad as well. We'll look into this one Steve Adler style with a Good, Bad and Ugly breakdown.

First, here's the grading for the first and second half. For an easy understanding, know that .50 is average/decent and .25 and lower is bad, with good performances being .75 and anything above 1 is crazy good. However, sometimes it can be skewed if you don't look at the entire spreadsheet, as Cam Thomas only had 1 gradeable play where he rushed the Passer in the first half and he scored well.

Full analysis after the jump

I Fired Orz, so there's no video this week. Unless you want to see the one of him and my secretary...

The Broncos had to be attacked very specifically. 7 and 8 man fronts because of Tebow's less-than-stellar throwing abilities, and gap/lane control on all running and option plays would be crucial, as is containment. Something a good 3-4 defense should have no trouble stopping. Note I said "good". For the most part, they did fine. But when they failed, it was spectacular. Tebow was contained on all but 3 crucial plays, and that killed the team's hopes of forcing a punt. I expected run blitzing to happen a lot, and it barely did. Credit the Broncos O-line though, as they were spectacular in pass pro and most run blocking.

I've been saying it all year and Manusky still hasn't listened to me. Donald Butler needs to play more. He can cover better than Spikes and he's generally better at stopping the run. The dude is a monster. He's a great tackler and he plays smart, hitting gaps and lanes very well. Vaughn Martin flashed some talent in the second half with lots of good plays. Unfortunately, his pass rush needs to get better. More on that later. Even though the Broncos had 208 total team rushing yards, it was a bit skewed by 5 full quarters of football. They averaged just 16 rushing yards per posession. THAT is pretty good in my book. That was pretty much all the good in this game.

Paul Oliver in pass defense. That makes two safeties on the team that can't cover (Gregory being the other). Yes, sometimes Oliver looks good in coverage but he's very consistent. I'd rather have a safety that's consistently decent than one who fluctuates from good on second down to bad on every other down. Time to give Stuckey a shot? Or one of the rookie corners? Tackling. That was bad. You shouldn't whiff 16 times a game. Sure tackling is underrated. Especially when a team's plays happen mostly on the line of scrimmage. Discipline is still an issue. I'll quote myself with this comment:

Decker's touchdown catch. It was a simple cover 2 defense. Tebow’s pump faked the holy hoot out of Dante Hughes and Eric Weddle, and Paul Oliver should have moved over top of Decker to cover him. 3 guys failed there. THREE. They were already in FG range, so you OBVIOUSLY need to defend the end zone, not 6 yard pass plays in the flat.

Pass rush. It's as ugly as it is non-existent. To be fair, lots of the playcalls were 3 man rushes with a QB spy/contain, which is smart because of how much other teams have been screwed by Tebow's ability to escape. But can no one get pressure? It sure seems like it. Drum roll please for the ugliest thing about the game.....

Shaun Phillips. He should have taken the day off. He couldn't get any pressure, and was a statue on running plays and option runs. He was faked out so many times I could make a scrapbook out of it. 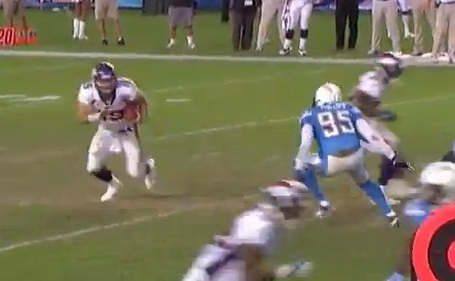 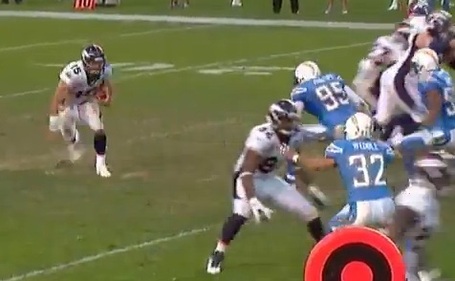 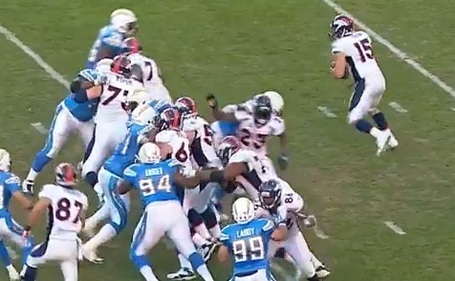 (He's on McGahee's back in the third pic) There are more but I think this gets my point across. Here's another point I'd like to get across... It's the Coaching staff's responsibility to teach these guys proper execution and discipline. Either they aren't following thier direciton, or they're kind of dumb, or the coaching staff isn't doing a very good job about it. It could be a combination of the two. Whatever it is, it needs to get fixed or this team will have no hope of reaching a respectable finish this year.

Rec if you'd like to see the aforementioned video, or if you liked the analysis.