First it was Luis Castillo, then it was Bob Sanders, Quentin Jammer, Jacques Cesaire, Larry English, and now, Shaun Phillips. Given all these injuries, I'm surprised Greg Manusky has managed to make this defense relevant. Despite so many injuries, the Chargers' defense managed to keep the Chiefs runningbacks to 80 yards on 30 carries. 6 of their 14 posessions were 3 and outs, and 2 resulted in immediate turnovers. While it's easy to point to how the defense has failed, they have also been very successful considering the changes they've gone through.

Here's how the players graded out, as a whole in both run and pass rush/coverage.

Any questions about whether he's only a pass rusher can be put to rest. Barnes played well against the run, and didn't look uncomforable in coverage either. He had some bad angles and was overpowered at times, but he doesn't play any worse than Larry English against the run, and is a better pass rusher. I have no problem with Barnes and LaBoy rotating series as the OLB in base formations.

I wasn't on board with Cason being benched in this game, but understood it was a disciplinary action for having failed last week. That being said, rookie Marcus Gilchrist didn't play any better than would be expected of Antoine Cason. He allowed every pass to be completed his way except for a high tipped ball and an uncatchable one. He played too far off at times, and in zone, looked more like a safety than a cornerback , not staying close enough to his receiver: 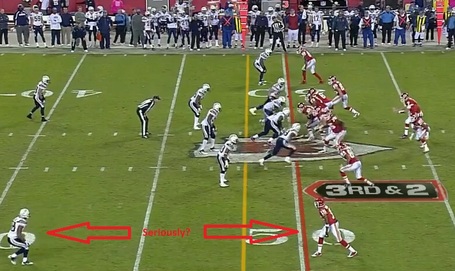 Note the down and distance.

Believe it or not, playcalling was excellent, but execution at times, was silly. Sometimes I wonder if the cornerbacks would prefer to play man. Based on opponent route tendencies, zone would defend the Chiefs well, if the Chargers' defensivebacks could play them a little tighter. There weren't many blitzes, but that's understandable with new players all over the field and new assignments. It's hard to complain about playcalling when you realize that there were new players all around the field. I continue to be highly impressed with Tommie Harris and Na'il Diggs. Both were great signings and have played beyond my expectations. Speaking of Harris, remember that big 3rd down stop towards the end of the 4th quarter? That was all Corey Liuget too (below). Nice push by the rookie. Antonio Garay, though still struggling a bit, had a better game stopping the run, but still has a hard time generating a pass rush without Castillo next to him. Cam Thomas had a great sack and is looking more like a potential NT replacement to Garay down the line. I'd like to see Thomas take snaps in the base 3-4 next week and let Garay and Harris play nickel packages. The Packers don't run very well and they play lots of 3 and 4 receiver sets. Maximum pass rush with Garay, Harris, Barnes and whoever, will give this defense the best chance at stopping Aaron Rodgers. 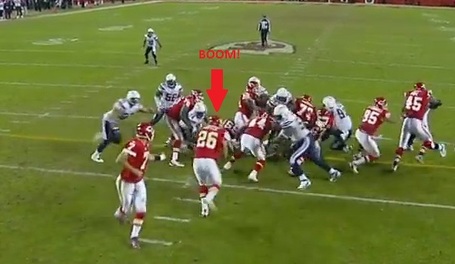 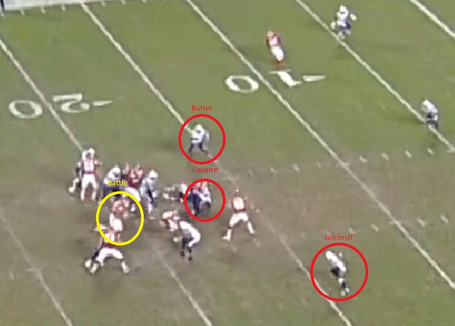 See if you can point out what went wrong on Jackie Battle's near Touchdown run. I see Jacques Cesaire getting completely run over, Donald Butler attacking the wrong gap, then realizing his mistake too late. Steve Gregory halfassedly taking out a blocker, Takeo Spikes not thinking that a guard pull meant a power O run, and hitting the wrong gap as well... and finally, Marcus Gilchrist not being in position to help out in time. Weddle, like always, saved (delayed) the TD. This one 18 yard run helped Battle jump up a full YPC on his stat sheet, and more importantly, secure a Chiefs win. There's no video this week, as Orz had to host an awards show for awards show hosts. Also, the short week happened to be busy for many of us. Rest assured, the Packers game analysis will be deep.