Share All sharing options for: Chargers at Bears: Defensive Analysis and review

Pass rush isn't optional. It's necessary in the NFL to succeed, and the Chargers do not have one right now. They are playing without star OLB Shaun Phillips and anchor Luis Castillo at DE. With the lack of a pass rush, the secondary should be looking for turnover opportunities at every deep pass, and they are not. See the picture after the jump to see what they could be doing.

Run defense this game was phenomenal for all but 3 runs. Including scrambles, Da Bears ran 32 times for 2.9 yards per carry. That's 93 yards on the ground. Unfortunately, the effort at run blocking didn't translate to dominating the line of scrimmage when Jay Cutler dropped back to pass. No sacks. There were 3 could-have-beens, but for the most part Cutler either had time to throw, successfully scrambled from pressure, or threw a quick pass. That's the main reason this defense failed to win in the windy city. Sacks can be overrated, but hitting a quarterback as he throws or making him throw inaccurately results in errant passes that can result in turnovers, or at best, incompletions.

Let's take a look at the grading for the first and second half, and after the jump enjoy the video and pics.

As you may have noticed in the grading, the Chargers front seven (or six) had a very good day stopping the run. 8 of the 11 players graded out positively, with Antonio Garay being graded dominant. Pass rushing, though, was the exact opposite. No one did any better than decent and it showed. The second half remained steady in run blocking but both Tommie Harris and Antwan Barnes completely fell off the board in rushing. I'm pretty sure Barnes is being worn out, not used to playing so much. Hopefully Shaun Phillips can come back soon. And if it ever crosses Greg Manusky's mind, having a nickel defense out and using a 3 linemen front of Castillo, Garay and Harris could be deadly if the other team tries to run. It could open up lots of nickel and safety blitzes too. Just a thought... but a good idea to try if I had a say in defensive strategies. All 3 of them can rush well and defend the run so you have to imagine they'd be hard to beat.

Looking forward I'd like to see these guys continue their dominance against the run. They'll need it when facing the next 4 teams, all with very good run offenses. If the pass rush gets going, this team may finally have a top 10 defense.

Let's break something down now... 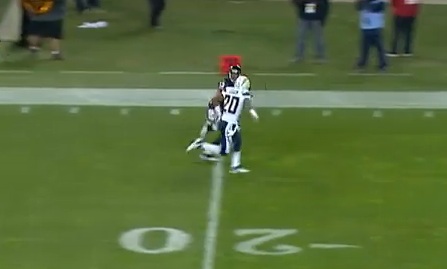 Note above where receiver Johnny Knox turns for the ball, at the 20 yard line. Below you'll see he makes the catch at the 5. That means he ran 15 yards tracking the ball and Antoine Cason never turned to track it himself. The reason elite cornerbacks have interceptions downfield is that they look for them. Cason had safety help and so could have at least looked over his shoulder for a pass to defend 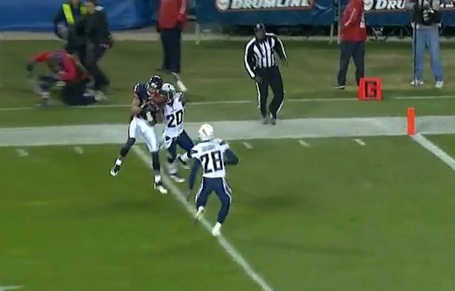 Believe it or not, this has happened on more than one occasion. In fact, it's been happening all year. These guys know how important turnovers can be. Just ask Philip Rivers! I hope looking forward they can look for opportinities when they have the chance. There are only 6 more of them before some serious changes occur on the team for better or worse.

Thanks to Orz for the video and use the comment section for any questions or comments and rec if this article was helpful in understanding Sunday's action.