Share All sharing options for: Playbook Confidential: Chargers vs Raiders

Last week, I lead off with a table showing the steady decay of the running game as a percentage of playcalls in recent weeks.  This week, it got so cartoonish in favor of the pass that I simply had to make a graph out of it.  It's quite possible that the Chargers will simply deactivate all running backs for the Chicago game; this would totally save them some money on airfare. 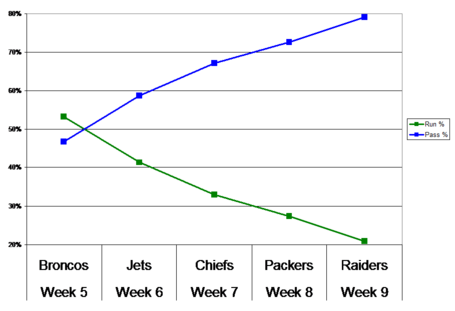 We could certainly have a lively discussion about whether this is a symptom or a root cause of the current four game losing streak.  In the case of the Raiders game, it was absolutely a key root cause in the offensive slowdown.  Abandoning the run against a blood-in-the-water pass rush allowed the defense to completely ignore their containment responsibilities.  This is the same defense that gave up 281 rushing yards to the Broncos the week before.  Ryan Mathews and Mike Tolbert each finished the game with 4.8 YPC on a precious few 14 total carries.  They had 8.4 YPC out of some really effective shotgun running.  I take back everything I said last week about the beginning of Norvember.  Aside from the Jacob Hester touchdown coming from a 1st down play fake pass out of jumbo "22" personnel, there was nothing interesting or different about this week's game plan.  This is pretty much proof that Norv brings out the good china for big time opponents like the Packers, but unloads the paper plates and leftover ketchup packets for teams that he thinks they can take lightly (such as supposedly lowly AFC West rivals).
As always, the suddenly pedestrian 2011 Chargers Offense is on display in the log I keep.
We'll keep the attention on that invisible running game for now.  For some reason, Mathews was left behind in that pass heavy game plan.  Outside runs continue to be awesome, and underused.  Runs out of "11" personnel continue to be awesome, and underused.  I don't get it.  Ryan Mathews is awesome.  Outside runs are awesome.  Runs with "11" personnel are awesome.  I am just a pajama wearing blogger and I can see these three things should be used more by this offense.
I did notice one positive halftime adjustment made this week.  In the first half, the Chargers used a lot of "12" (two tight end) and two fulback personnel while failing to really protect Philip Rivers.  The solution to slowing down the pass rush was counter-intuitive;  in the 2nd half "11" personnel became super dominant.  I think that trading in tight ends and extra running backs clogging up the middle for the extra wide receiver with Antonio Gates in the slot forced the Raiders defense to likewise spread out.  It seemed to force the Raiders into to simply rushing four most of the time.  The pass rush was still pretty intense, but three sacks in the 1st half came on fourteen called pass plays vs only two 2nd half sacks on 39 called pass plays.  The Chargers also scored only three points before the half, and fourteen points after it.

I wasn't even going to include the overall run/pass balance table this week, except that it reminds us how nice the days of complaining about red zone play calls were.  There were only three red zone plays this week.
Next Opponent: Da Bears

I had to double check the pass stats below.  The Bears are ranked 29th in total yardage defense, but ranked 6th in pass defense DVOA.  That's a head scratcher.  Maybe John Gennaro can get to the bottom of that one in his Chargers-on-Offense game preview.  Their run defense ranks match up at 13th.  Not that it matters, somewhere in Chargers Park right now, Norv is trying to get AJ to trade Mathews AND Tolbert for some offensive lineman.

All VOA, DVOA, YAR and DYAR statistical values are developed, calculated and reported by Football Outsiders. Their explanation can be found here.