Share All sharing options for: Defensive Analysis: Chargers vs Raiders

This defense has talent. They really do. But there are a few things missing. The obvious being health. Another being discipline. A glance at the defensive roster shows only Jammer, Weddle, Castillo (hurt) and Phillips as known cornerstones. Is it really so hard for this unit to come together consistently every game? Apparently so. For now, let's focus on the good.

Oakland came out and was immediately shut down on their first drive, going 3 and out. On their second drive, after a big first down, they again were forced to turn the ball over on a crazy fake punt. Their third drive was the one that set a tone they would want to keep up all game. They didn't face a single 3rd down. 1st down, 2nd down, 1st down again. A deep pass to Jacoby Ford where CB Dante Hughes had his arm 3 inches too high to defend gave Oakland instant field goal range, and with the 2 defensive penalties you would think the Chargers wanted Oakland to score. It was not the end. Oakland would continue their philosophy of run, run, throw deep with the occasional screen and playaction. And yet, with the Offense needing the ball to score and make a game out of the match late in the 3rd quarter, the Defense would deliver with forcing a sack-fumble, an interception, and a 3 and out. Check out how poorly they did stopping the run and rushing Carson Palmer...

Here's the grading for the first and second half (0 being owned and 1.0 being dominant):

Video and Pictures after the jump

I say this team lacks discipline because of so many plays where one or two players aren't doing their job. Too many times on runs off guard, the outside man tries to overrun the tackle, and the inside lineman to him pushes inside. This means, there is a huge running lane to hit. It's a back-breaker when it's a power O run because a guard can take out the ILB and the FB can take out anyone else and spring a huge run, like happened on the first play of Oakland's second drive. Observe the pic below. You'll see the two eyes circles are Corey Liuget and Travis LaBoy. Now, if Liuget tries to rip inside, LaBoy should too, because Oliver is at the edge for containment. In this case, the blame is on LaBoy because if Oliver is on the edge, it's because he expected the side and middle to be collapsed. If LaBoy is in the correct technique, then both Liuget and Oliver played it incorrectly. This play is not a one-time occurence. It's happened frequently. You could also call it poor execution, since they're failing at the play design. It's a bit of both. And even bad communication. 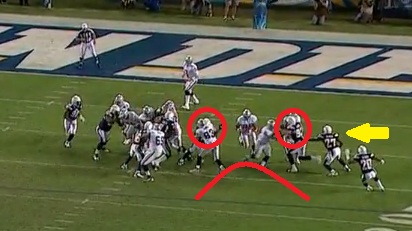 Look at this next run. Standard Nickel formation. Take a wild, and I mean WILD guess where the Raiders are running to. If your sarcasm detector is working, you'll konw they're running right.

This is just too easy. You're practically giving the other team a free 12 yard run. Greg Manusky should get a smack for this. If you want to stop the other team's running out of nickel, at least make sure you've got either Antonio Garay or Tommie Harris in there and that they're aligned right. Although, alignment is also responsibility of the players. You need to run your formation according to the opponent. Here, Cesaire and Martin shouldn't have been aligned in the L2/R1 gaps, but the L0/R3 gaps to possibly put a double on Cesaire and make it easy for the ILB's to hit their lanes. It's this kind of lousy gap control that led to the Raiders (and Broncos) ripping off so many big runs. See why Castillo is necessary? At least he's disruptive enough that he demands a double team. He's also smart enough to move over and improve the chances of limiting a run.

If it wasn't painfully obvious, the pass rush was weak. Antwan Barnes had a hard time getting pressure and I think it's because he gets worn down playing so many snaps. Having Phillips back could help out in that area greatly. While Garay and Harris sometimes get pressure, they were many times just a tick too late. If the Pass rush was good, covereage wasn't, and vice versa. It was very disappointing and aggravating as well. This team is so much different without Luis Castillo and Shaun Phillips. I think that's why Greg Manusky turned down the blitz, but even so, there are ways to make up for it. Ron Rivera used to use double ILB blitzes and secondary blitzes, I'm sure Manusky could do the same.

I have to put some blame on Manusky. This is his defense. They aren't executing properly and it's hurting the team. I understand there have been a lot of changes and injuries, which is why I'm not calling for his head. But if he can't teach his guys to play their responsibilities and stay organized, he won't be here next year. There are 7 games left, and two key players are coming back withing the next 2.