For their week 4 matchup at home, the Charger defense came out with a new philosophy: Attack. Defensive coordinator Greg Manusky called up 6 blitzes. In the first half. 5 more in the second half for a total of 11. That means 21% of the time, there was a blitz, and many of them worked to produce a sack, interception, and a long third down. When you look at it from a coaching perspective, it was easier to blitz and be aggressive when you have a lead during seven of the opposing offense's drives, which is why the last 3 games haven't been so aggressive as far as blitzing goes. It could also be that the lockout and lack of time with new players and a new DC made it difficult to work out anything exotic. In any case, it was great to see Greg dial up the pressure. At the end of the article is a surprise for you loyal readers and blitz fanatics.

New this week was Defensive lineman Tommie Harris. Want to know how he played? Read along. You'll also get some insight as to whether Larry English was actually getting pressure leading to his two sacks, or if they were just luck of the play. Here's a hint: His first half score is inflated by his one and only gradable pass rush.

Here's the first and second half grading:

Some observations so far this year: Cam Thomas is a new man. He's graded out twice as well as last year, improving significantly against the run, and when facing double teams. He's just marginally better in pass rush, but doesn't get many opportunities there, so there's still time to get a better read on him. He now adds better technique to his run stopping and I don't see him 'give up' like he did on several occasions last year. Maybe having Spikes on his butt has helped him. Maybe more playing time has given him a reason to want to show he can take Garay's spot a few years down the road. Whatever it is, good for him. At the rate he's improving, 2 years from now he'll have regular reps and be considered a late round steal. To see his improvement, look at the last clip in the video, his pressure may have saved a touchdown, as Moore couldn't step into his throw.

Antonio Garay has struggled a bit this year. As I'm sure you've all noticed, Garay has been taking on the majority of doubles now that Castillo has been gone, and his grades this season (except for Minnessota when Castillo was in) have been 25% lower than his normal. He's had to fight hard against doubles in the pass rush, and has seen a lot in running plays as well. It seems that he doesn't have a lot of experience in the double team department, given his relatively short career. That might change though because of:

Tommie Harris. His grades are good, considering he was considered by some to be an old, washed up has-been. I actually look forward to having him on the team. He still has the ability to play well. On run plays, he's disruptive and fights off blockers well, and on pass plays, gets good push. When Castillo comes back, I suspect OG will be released if another roster spot is needed, and Harris will be in the immediate rotation schedule.

Corey Liuget looks good rushing the QB, but has struggled a bit in stopping the run. I think it's because he has to get accustomed to being an end in the 3-4. He sometimes throws a blocker off, but the wrong way or wrong time, and makes it easier for the runner to get his yards. He needs to get used to having 2 guys behind him to make tackles, and remember that his responsibility is a bit different in the 3-4. Also, his height being and inch or two makes it hard to look into the backfield, so I suspect that's something making it difficult for him to get good reads on certain plays. He plays all the way, however, running across the field and shedding blockers well in space to find the ballcarrier, so clearly he's smart and has ability, so I have high hopes for him to be a force on the line by the middle of next season.

Another player struggling a bit by the loss of Castillo is Shaun Phillips. The DE stunt play worked better with Castillo, as he could find a way to engage 2 lineman and give Phillips a free lane to run through. OG and Martin haven't been able to perfect that technique that surely took years to develop. It's hard to replace 4 years of chemistry in 4 weeks....

Now, Larry English got 2 sacks. Were they all Larry? No. No, they weren't. I'm glad he seized the opportunity, as that's half the battle, but he didn't really beat the tackle on the second sack. Moore stepped into him. English, for the most part, struggled against all pro LT Jake Long, but he looks healthy, and pretty decent in coverage, so if he continues to play hard, his effort will eventually pay off.

Favorite play of the game: 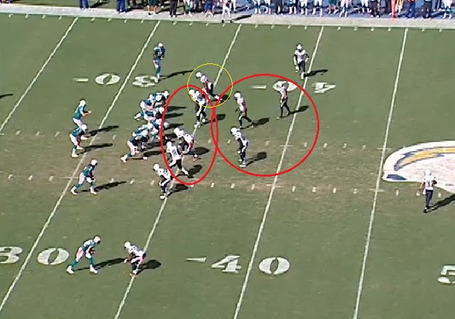 In the red circles are the blitzing players, and in the yellow (Diggs) is a drop zone fake blitz. Notice how many linemen are down. They're all standing up menacingly. This play led to a hurried throw, intercepted by Weddle, but called back on a PI because of Gilchrist being a bit too physical downfield. It helped Miami get a Field Goal, but I don't care. It was a badass play and I pray to see this at least once a game. Note Cason being trusted in 1 on 1 coverage on Marshall. The blitzers were Martin, Harris, Phillips, Barnes with the pressure, Spikes on the edge, and Gregory as the back end.

I like where this team is heading, and it's biggest test will be the first 3 games of November.

Thanks to Orz for the video, Rec if you enjoyed this story! Leave your Questions and comments below.