The fight for first place in the AFC West is on. The Chargers are currently a half-game up on the Raiders and a full-game ahead of the Chiefs. A victory for Kansas City would put the teams in a three-way tie for first in the division, while a win for San Diego would give them a full-game lead over Oakland and a two-game lead over the Chiefs. That second scenario sounds better.

The biggest question heading into this game is one that Bolts fans are unfamiliar with: When will Philip Rivers go all.... 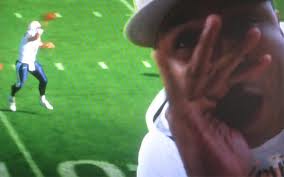 If it's tonight, San Diego can feel good about it's first-place standing in the (relatively weak) AFC West. If it's not tonight, then the Chargers' share of first place does nothing to calm the nerves of even the most faithful Charger fans.

I'll be back around half-time for a quick run-down of what I saw in the first half along with a fresh game thread for the second half. Until then, GO CHARGERS.