Power Rankings From Around the Web: Week 1

Share All sharing options for: Power Rankings From Around the Web: Week 1

Do you smell that?  Football is back and the NFL seasons starts tonight! (And you thought I was going to make a joke about gas; shame on you.)  With the regular season kicking off tonight, the vast majority of sports sites have released their Power Rankings this week.  More good news: not only have most the subjective rankings come out, but 3 of the 4 objective sites have released rankings.

So, with all that rambling out of the way, let's jump into the rankings!

We'll start off, as usual, with the Subjective Average.  If you're new to this post, these rankings are the ones that has actual people ranking the teams based on their gut feelings.  You'll see in a moment that some of these sites may even just throw darts at a board, or have a chicken pecking at numbers.  Regardless of method, there are rankings.

Before we take a look at the rankings themselves, I've gathered a few quotes of what the media is saying about the Chargers this week.

Philip Rivers is missing in too many young stud QB conversations.

In their opening six games, the Chargers face only one team that made the playoffs last year, so they're going to really have to work at it to pull off another one of their patented slow starts. No Marcus McNeill and Vincent Jackson weakens San Diego, but maybe not as much as some are projecting. It's a deeper, stronger AFC West this year, but the chances are very good indeed that a sixth division title in seven years is on the way in San Diego.

They've got an easy path back to the postseason.  Whether they can do a better job once they get there remains to be seen.

Okay, enough rhetoric, on to the pretty charts! 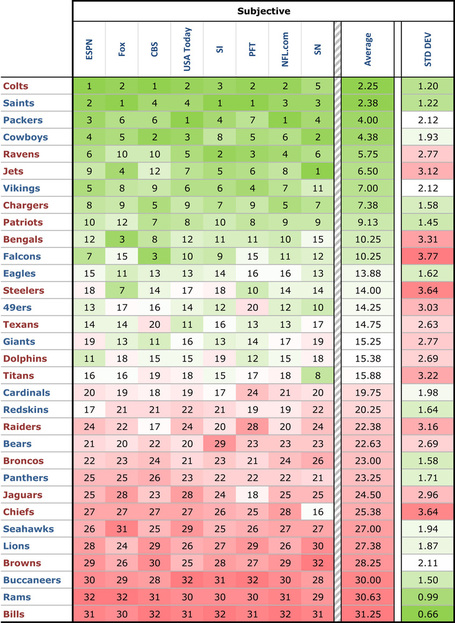 Real quickly: this shows how much in agreement the various pundit sources are. 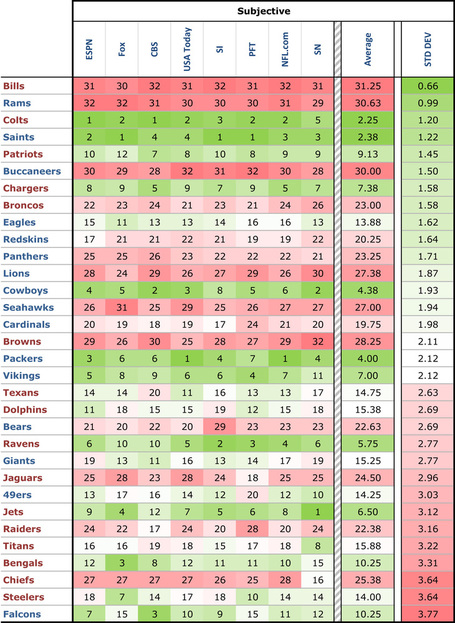 Now let's take a look at the other side of the coin: the Objective Rankings.  These are rankings put out by geeks who come up with mathematical formulas that they all swear by as being the best way to say a team is good or bad.  This is supposed to be a more reliable way to determine where each team stands.

Let's see how the teams stack up, shall we?

So, how far off the mark are the various formulas?

Now let's take all the sites together and look at their rankings overall. 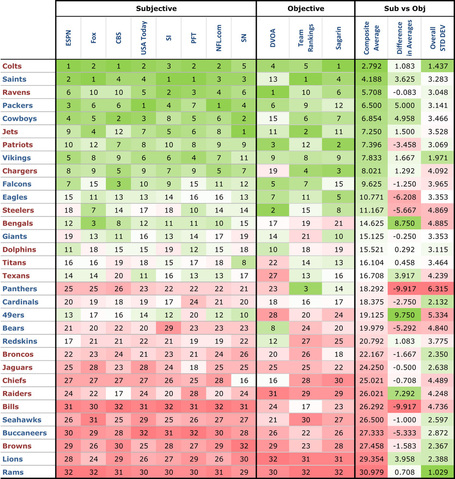 This takes into account all the rankings, both objective and subjective, and looks at how in line they are with each other. 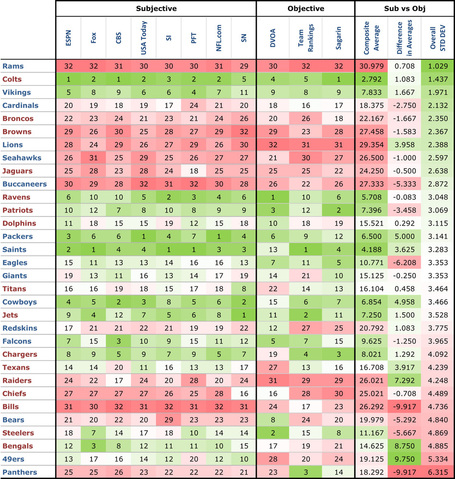 This takes a look and compares the Subjective average ranking with the Objective average ranking.  This tells us just how far off people are from the formulas.  A positive number means people think they'll be better than the math indicates, a negative number means the math thinks they're better than what people think.  The closer to 0 this number is, the more in agreement the Subjective and Objective rankings are. 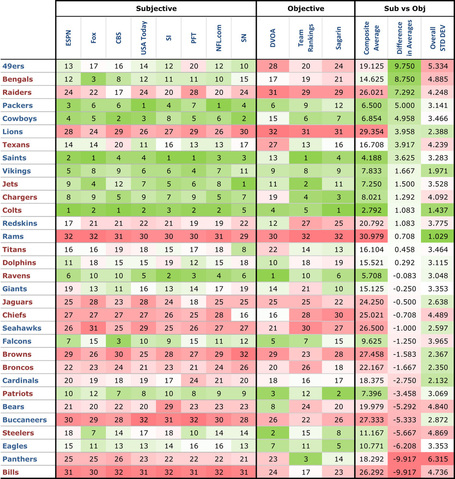 That wraps it up for now. Look for another installment next week!