Share All sharing options for: 5 Bad Things: Chargers at Seahawks

Do I ever have to say it? Kick and punt coverage has been atrocious and has now cost the Chargers two close games. The Chargers were excellent at winning close games last year because they didn't get stupid penalties called on them, they didn't turn the ball over and they played well on special teams. All three of those things have now changed, at least in the early part of this season, and need to be addressed if this team wants to make the playoffs again.

2. Pass Rush, or lack there of

Let's face facts, the pass rush looked good when Shawne Merriman was in there to start the game and disappeared after that. Shaun Philips got a nice sack during "garbage time", when Matt Hasselbeck was more concerned with not turning the ball over than getting the first down. Brandon Siler got a sack on a blitz that the Seahawks weren't expecting. Antwan Applewhite played solid, and ran into a sack, but wasn't....and sadly isn't....Shawne Merriman.

Things should be a little different against the Arizona Cardinals next week, even if Merriman doesn't play, because Ron Rivera should be daring Derek Anderson to throw deep and therefore will probably be using more blitzes from the Safeties and Donald Strickland than he did against the Seahawks.

When people would bash on Ron Rivera's zone-heavy defensive play-calling last year I was always quick to point out that the Chargers ranked amongst the best teams in the league at not giving up big plays, be it on the ground or through the air. Maybe it's because Brandon Siler is in there instead of Stephen Cooper, but the D has a different look this year. They seem to be more the type of team that will shut you down 90% of the time, but the other 10% you will be able to gash them for big plays.

I don't know what it is about the Chargers receivers this year, but Philip Rivers' higher-than-normal interception total has a lot to do with them popping balls in the air or letting them slide off of their fingertips instead of catching them. Antonio Gates has at least one instance, Legedu Naanee has at least one, and I feel like there has been at least 1 more.

There has been an abnormal amount of interceptions off of uncaught balls for Rivers this season, and working on the hands of our receivers could only help to lower than turnover number.

During preseason I pointed out that every great team these days has at least 1, sometimes 2, rookies that step up and play at a high level right away. I had hopes that was going to happen with the Chargers this year. Let's check in with what the 2010 draft class did on Sunday: 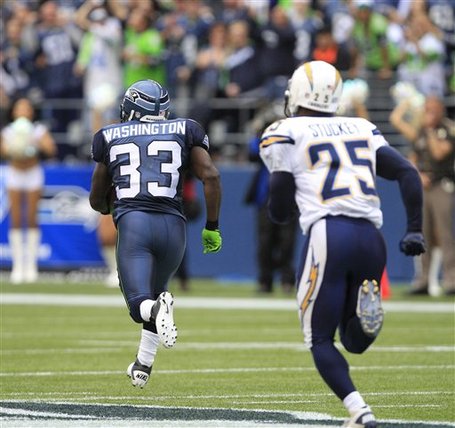