Chargers Season Preview: How Many Wins?

Share All sharing options for: Chargers Season Preview: How Many Wins?

I'm actually surprised that nobody has yet taken it upon themselves to go through the San Diego Chargers' 2010 regular season schedule and predict wins and losses. I guess that leaves it up to me.

Week 1
at Kansas City (Monday Night)
I have to be honest here, although I know that eventually some Chiefs fan is going to grab a hold on this statement and try and throw it back into my face. I don't think the Chiefs are a good team. I think they're a mediocre team with a very good running back. I think they're the Tennessee Titans of 2009, and I think Matt Cassell is more Kerry Collins than he is Vince Young. Even if he's Vince Young, that's still not the greatest thing in the world.

In two games against the Chiefs last year, the Chargers won by 30 points and 29 points. Assuming all the talk about the Chiefs getting better this year is true, I could see those margins shrinking....but not by that much.

Week 2
Jacksonville
The Jaguars are one of the weirder teams in the league. David Garrard looked like he was the next Donovan McNabb in 2006 and 2007, before looking pretty terrible for the last two seasons. Similar to Matt Cassel, I have always taken issue with Garrard's penchant for holding onto the ball too long and taking negative plays. I'm a little surprised that this team went 7-9 last year in such a tough division, because I thought they were much worse than that. Their young offensive line will be a year older, and their running game could be a problem for the Chargers. This just feels like one of those early-season "wake up" games for the Bolts.

Week 3
at Seattle
Say what you want about the state of the Seahawks, Pete Carroll has completely revamped that roster and there is real excitement surrounding the team. Playing in Seattle is always challenging too, as they have one of the loudest fanbases/stadiums in the league. Don't sleep on Seattle, if Matt Hasselbeck is healthy and Lawyer Milloy(!) doesn't kill them as the Strong Safety they will have a good shot at winning the division. This team has talent. This will be a tough/close game.

Week 4
Arizona
I feel like I just took a deep breath. After facing an above-average power-running game (yikes!) and a Pro Bowl QB, the Cardinals should seem like a fairly easy matchup. If Matt Leinart was the starter and had a good preseason, that'd be one thing, but this looks like it's going to be a down year in Arizona with Derek Anderson manning the QB position.

Week 5
at Oakland
It seems like every offseason the Raiders are the team that I have the most trouble figuring out. This offseason, people are constantly asking me "Are the Raiders going to be good this year?" and my answer is usually something like "Well they have a good defense, a good running attack, a good coach and what seems like a good QB. Then again, they are the Raiders. So....maybe?" This team could win 10 games this season and not surprise me. They could also win 3 and not surprise me. Even if it's the former, and they turn out to be a good team this year, I really can't imagine either game being anything but a close matchup that ends with a Philip Rivers 2-minute drill for the game-winning score.

Week 7
New England
I'm really happy that this is a home game. Outside of that, this game scares me. For the first time in a long time, people aren't talking about the Patriots as Super Bowl contenders. Not as much as usual, anyways, and if they love anything it's being an underdog. Add that to the fact that Tom Brady looked better in the second half of last season than the first, and you could see how this could be a tough team to handle. It's too bad we can't convince the Patriots to trade for Matt Cassel for this game, cause it was a lot of fun last time.... 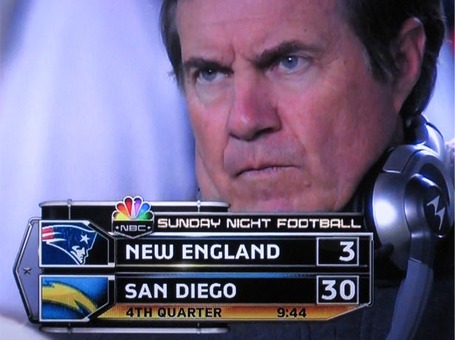 Week 9
at Houston (10am PST)
Let's talk about time for a second. It's a well-known fact that west-coast teams typically don't do so well when they have to travel to the east coast and play 3 hours earlier than normal. The players' internal clocks play some role in all of this and make them not as comfortable. The Chargers' seemed fine against the Giants last year in their only Eastern Time Zone game, but this one is another test. I guess it's just dumb luck then that this game is being played on the day when everyone's clocks are set back one hour.

As far as the football is concerned, who knows? I tell everyone who tells me how good the Texans' offense is that Matt Schaub has always been this good, he's just never been able to stay healthy for an entire season like he did in 2009. If he can do it again in 2010, this will most likely turn into an offensive shootout that can go either way depending on Pass Intereference calls, dropped passes, Holding penalties, etc. etc. If he can't stay healthy, this is an easy Chargers win.

Week 11
Denver (Monday Night)
Pretty late to start playing the Broncos, wouldn't you say? I still think this is a team on the rise, but this late in the season I think their old defense will start having some issues.

Week 12
at Indianapolis (5:20pm PST)
I'm not a believer in the "We have Peyton Manning's number!" sentiment that floats around San Diego. Call me a coward, but that's still one of the 3 best QBs to ever play the position. The Patriots thought that had his number for a long time, and look at what he's done to them in the last few seasons.

Week 13
Oakland
I hate the weeks when the Raiders come to town. The whole city downgrades. Again, by this time in the season this could be a matchup to determine the AFC West champ or it could be the Raiders having nothing to lose and trying to injury Chargers players.

Week 14
Kansas City
Please no Brodie Croyle. That guy might actually beat us. By the way, in response to my statement about owning/not owning Peyton Manning....when does the "Matt Cassel can't beat the Chargers" talk begin? 3 games, 3 losses by about 4 touchdowns. His QB rating against San Diego is a delightfully low 49.4 and the only team that has sacked him as much as the Chargers (10 times) have is the Steelers (10 in 2 games). Until Matty can have a good game against the Bolts, I will continue to believe that it's not possible.

Week 15
San Francisco (Thursday Night)
A short week (boo) isn't that bad when it's your third home game in a row (yay!). Still, this is one of those games where the Chargers could be caught napping. Also, the 2010 49ers remind me an awful lot of the 2009 Jets. Strong defense, strong o-line, strong running game and a pesky QB that can do just enough to beat you if the team is disciplined. I think this team is going to be scary-good.

Week 16
at Cincinnati (5:20pm PST)
The best thing about a short week is that it's followed by a long one. I wasn't a big believer in the Bengals last season and, with Cedric Benson being run into the ground and the team signing Terrell Owens (and desperately trying to work him into the offense), I don't see that changing in 2010. I tend to think their record in '09 was a bit of a fluke, and I think they'll come back to earth and be a .500 team this season. 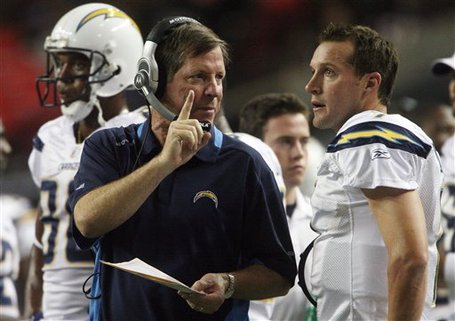 "Charlie, get loose. And grow your beard back, for Christ sake....you look like a 12 year old boy."