Share All sharing options for: 5 Good Things: Chargers at Chiefs

This is an idea blatantly stolen from Arrowhead Pride, who have been doing it forever. Basically, the day after the game Joel Thorman tries to look at the game from both an optimistic and pessimistic point of view. He does this by trying to find 5 good things about each game, and then 5 bad things as well. I've always wanted to give it a shot, so here goes. 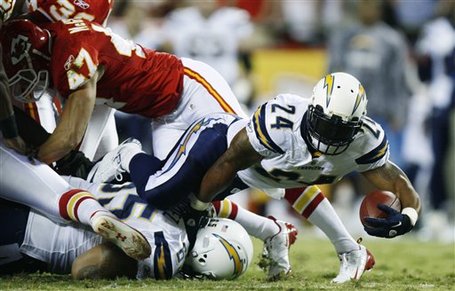 1. The Running Game has been Improved

Do you want proof of this? Okay, let's start off with the conditions. Running in the rain is always tough because the field gets slippery, but it's made even more difficult when the rain is so heavy that your team can't throw the ball and the defense can key in on the running back. Add in the fact that it's Ryan Mathews' first game and he's in probably the loudest stadium he's even been in, and the kid did pretty good. Here's his line:

Right now you're saying to yourself, "Not great, not terrible". The thing is, as I've always stressed in the past, expectations should be set by what was and progress should be applauded.

Yes, he had a key drop late in the game and his long touchdown pass had more to do with Antonio Gates than it did with him, but Naanee had himself a heck of a football game last night. Although Brandon Carr was doing a fantastic job on Malcom Floyd, Naanee came out looking like Philip's most reliable receiver.

Since he sortof fits the Vincent Jackson mold of strength, speed and hands better than Floyd does, perhaps this could eventually lead to Floyd going back down to #2. Either way, the more reliable receivers Philip has (and it appears they're all pretty good), the better off the offense will be.

3. The Defensive Secondary Was Good

All of the Chiefs WRs combined equaled up to 2 catches for 27 yards last night. That was it. Chris Chambers spent the game trying to fight off Antoine Cason, and Dwayne Bowe was blanketed on nearly every play by Quentin Jammer. Did it help that Matt Cassel was inaccurate with the football? Absolutely it did, but that doesn't mean that the secondary (that many people were worried about) wasn't terrific.

On a related note, Antonio Cromartie played like Antonio Cromartie and the Ravens picked on him all game long. He was a very big factor into why the Jets lost their game last night, and now we can look at similar situations (vs. Chambers, with Cassel as QB) for Cason and Cromartie and say "Hmm....maybe this was a good idea." Don't forget, Chambers abused Cromartie last season for 7 catches, 70 yards and a TD.

Not that he played poorly when he was on the field in 2009, but he seemed to play better than that and walked away from the game healthy (as did Buster Davis!). His coverage skills were fantastic, and his run defense was very good as well. The high hopes I had for him last season have returned.

5. Antonio Garay is a Monster

When people ask me "Who is this guy?" or "Where did this guy come from?" The honest answer is that I have no idea. Connections mean everything and we should be thankful that Ron Rivera knew this guy from years ago, because he has looked completely dominant in the preseason and last night. The same way Jamal Williams, and the double-teams he forced, was the key to the Chargers defense being good in the past, Antonio Garay and the double-teams he required was the key to San Diego's D looking good last night.

If this guy can stay healthy, and continue to require double-teams, and play like the beast he's been the last few games now, that could do wonders for the Chargers defense and therefore playoff chances.