Power Rankings from Around the Web: Training Camp Edition

Share All sharing options for: Power Rankings from Around the Web: Training Camp Edition

You’ll see shortly, but I could have also called this post, "Power Rankings Lite".  Anyway, with Training Camp underway, most the big names in sports media released their Power Rankings.  Most of them released their rankings at some point between the end of the draft, and last week.

Because we haven’t actually played any football, the Objective Rankings are not available right now, for obvious reasons.  This edition of Power Rankings will focus merely on the subjective rankings that were available.

That all said, let’s dive in!

As a refresher, the subjective power rankings are where people (or groups of people) rank the various teams based on their own opinions. It's serves as a snapshot of how well teams are expected to perform this year; or can be viewed as the conventional wisdom for the 32 teams in the NFL.

During the regular season, there are a few more sources available that I was unable to use this time around.

Some notable quotes I gathered from the various rankings:

I'd like the Chargers a lot more with WR Vincent Jackson than without him.

It's time they get past just being a really good regular-season team. It's time this talented team gets to a Super Bowl.

Can't see the Broncos, Raiders or Chiefs making the Chargers sweat out the division title and that means San Diego will be back knocking on the door again in January. For all its talent, this is a team that needs to grow some guts in the playoffs, because the Bolts can't be wasting 11-game winning streaks against a lesser opponent like last year's 9-7 Jets. I'm looking for big things from rookie running back Ryan Mathews in San Diego, and it says here he'll produce from day one.

This just takes all rankings for each team and averages them out, then sorts based on that average. 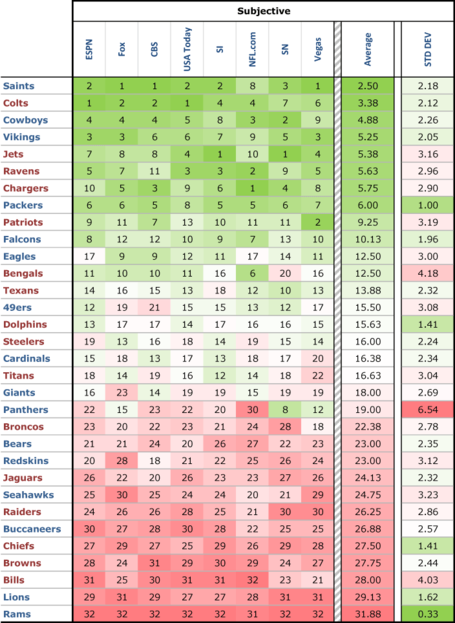 What’s interesting here, is that even though the Saints won the Super Bowl, they’re not exactly the favorite for the best team in the NFL right now.  Obviously, things have changed since the Super Bowl ended.  However, it is interesting to see the Saints as the highest-ranked team in the NFL, and their average ranking is only 2.50; they couldn’t even maintain an average of less than 2.

The Chargers come in ranked in 7th-place overall.  Looking at the teams ranked ahead of them, my gut says it’s difficult to argue with the Chargers’ placement (at this point in the pre-season).  Although, I may not be as high on the Jets as everyone else, I just don’t believe they are (or will be) as good as everyone else seems to believe.

One thing that surprised me: the Atlanta Falcons actually cracked the top-10.

That all said, let’s take a look at the chart. 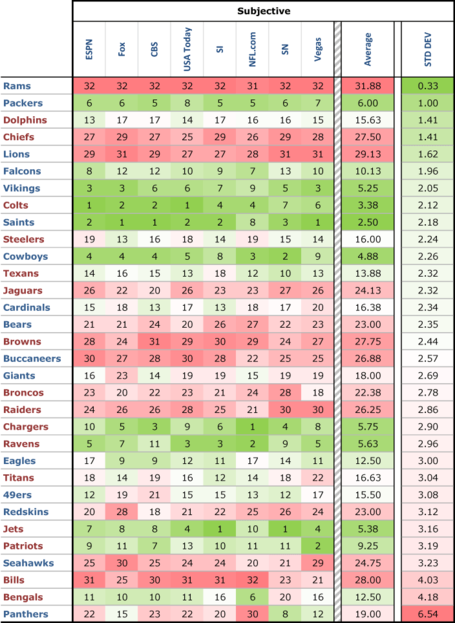 Oh, those poor Rams, never getting any respect.  All last year, they were consistently ranked as the worst team in the NFL, and it looks like that hasn’t changed this year.  At least NFL.com was kind enough to throw the Rams a bone here and rank them 2nd-to-last.

How about the Chargers?  Well, they’re a little on the "Inconsistent" side of things.  The pundits don’t quite seem to know how well the Chargers will perform without their holdouts this year.  The Chargers are ranked anywhere from 1st, to 10th, and nearly everywhere in between (with the exception of 4th and 7th).

Who’s the most inconsistently-ranked team?  The Panthers.  They have the largest variance of rankings, going anywhere from 8th, to 30th.  Guess we’ll have to wait for the season to see just how good they are (or aren’t).

Yep, that’s it.  I’m aware this post seems a bit light compared to past ones I’ve done, but that’s all thanks to the nature of the objective stats-based sites.  They’re reactionary based on performance, not opinions (or throwing darts at the wall).

Depending on what the various news sites do, I may be able to get another rankings post up before the first game of the season.  If not, then the next time you’ll see one of these posts will be following Week 1 of the season.