1980 was a memorable season for Chargers football.  Dan Fouts passed for nye on 5,000 yards.  John Jefferson, Charlie Joiner and Kellen Winslow (the elder) all caught for 1,000+ yards.  Chuck Muncie was tearing it up at almost 5 yards per carry.  And in the midst of all this offensive plenty, was something quite remarkable: a hard-nosed blue-collared defense that tore through offensive lines like they were tackling dummies. 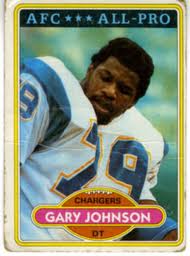 The heart of that defense was the defensive line, known as the 'Bruise Brothers'; they more than lived up to their moniker.  There was Fred Dean who was small and cat quick as a defensive end, particularly effective in pass coverage.  There was Louie Kelcher who struck fear in the hearts of offensive lineman across the league.  Leroy Jones was merely talented in a line of untamed lions.  The last member was Gary "Big Hands" Johnson, who pulled down quarterbacks the way leopards take down gazelles.

In 1980 he picked up 17.5 sacks from the tackle position, more than anyone in a Chargers uniform, and more than anyone in the league that year.  The Chargers had a league high 60 sacks that season, and part of the reason was that there were no weak links, there was no where to run to baby, no where to hide.  In the Pro Bowl 75% of the DLine were Chargers, they were that good.

After watching these guys play so long ago, it almost feels like an old friend has died.  What I always liked about Johnson was his smile; you could tell that he was one of those guys that left all the aggression on the field.  Big Hands was doing something he loved and excelled at it.  He was not huge, but he was quick and incredibly strong; it was a lethal combination.  Johnson spent his best years, 1975-1984 as a Charger and picked up over 60 sacks during that time, he made the Pro Bowl from 80-83.  He still ranks second in all time Charger sacks.

Johnson picked up his nick name when a junior high coach told him to 'Take his big hands' off the coaches ball.  Sadly, like the crazy aunt that sells the heirlooms for a handful of magic beans, the Chargers started selling off great pieces at ridiculous rates, first Dean, then Kelcher and finally 'Hands' all went to San Francisco where they would get superbowl rings.  The end of the Coryell days were known for a great offense and no defense, but there was a time when Fouts would dissect an opposing defense like a rapier and the Bruise Brothers would demolish offensive lines like a sledge hammer.