Chargers Training Camp: Act Like A Professional Or Fake It

Tuesday night John emails me and invites me to some event at Qualcomm. He's offering free booze, free food, Qualcomm field access and a chance to fake it as a professional journalist. Hell yeah. 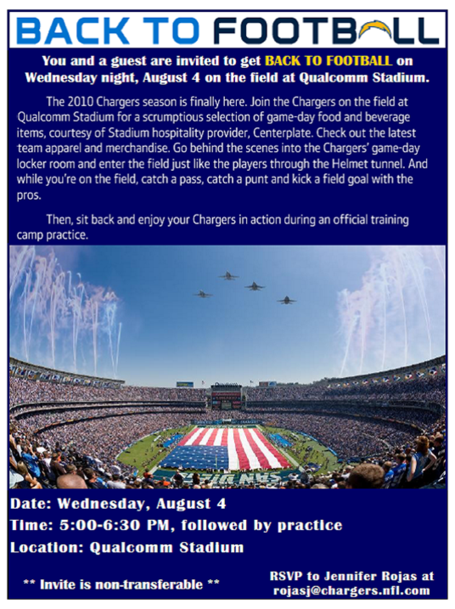 We were both there before 5 pm and a couple big shots (one I recognized as Ben Higgens from KGTV) got to sneak in before the gate opened. John was a smidgen paranoid that I'd get thrown out of the "No Homers" clubs for wearing my Chargers Polo. The gate opened in short time, and nimbly John and I were one of the first ones through. John's name was on the list and had a pre-made name tag. I had to have one made for me. John asked for Kevin Acee's name tag, which was at the top, but for some reason the lady declined. Lame. Anyway, we also got a free powder blue Chargers hat (so much for worrying about my Chargers paraphernalia) and a wristband. Here's the suckers who didn't have the cat-like reflexes to get ahead of us in line. 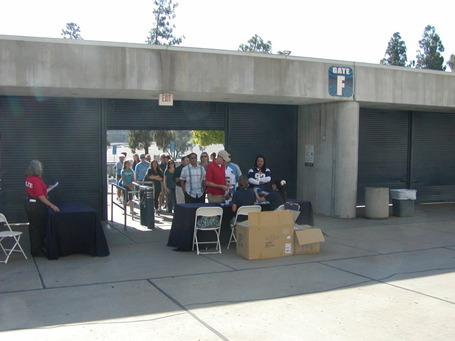 We took elevator 3 down to field level and followed someone who knew the way. I'm pretty sure the person we followed is on television, but I don't know who she is. Something to work on. We came through a real tunnel followed by a blowup tunnel. On the other side we were greeted by Jamaal LaFrance and made our way towards the bar. The choice was cheap beer or wine and John and I went classy with cheap beer. The party was on.

The first few pictures are from us exploring. 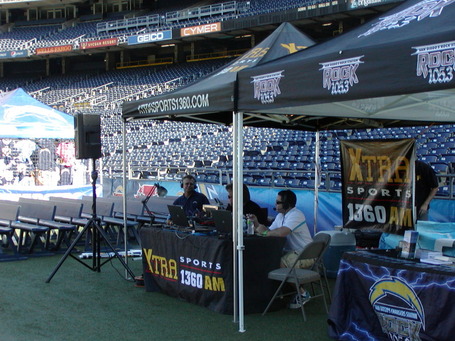 XTRA Sports 1360 in the house. Josh Rosenberg in white and Jeff Dotseth behind the pole. 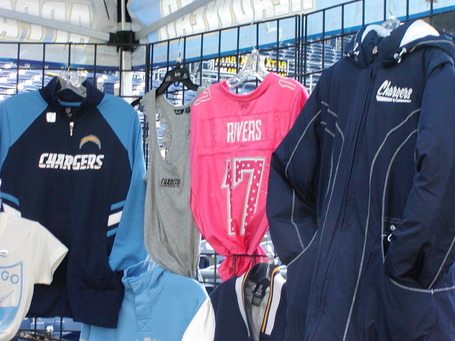 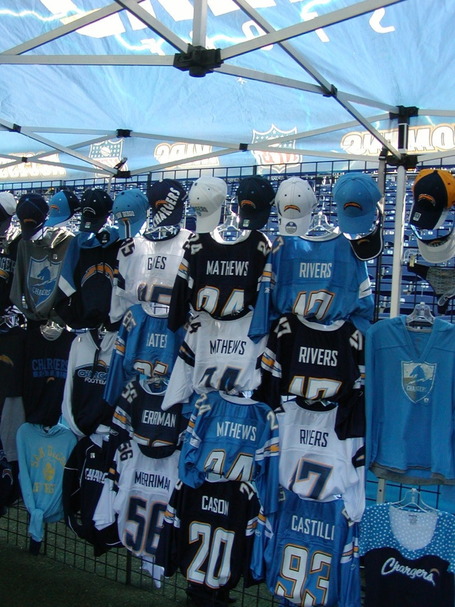 We found merchandise on display. John wants the pink Rivers jersey. I'd have to lose a bet to wear a pink jersey or a Rivers jersey, so this is not on my wishlist. The real jerseys were also on display. Notice the Merriman jerseys in the set? There was also a Jackson 83 jersey, but it's not in this shot. 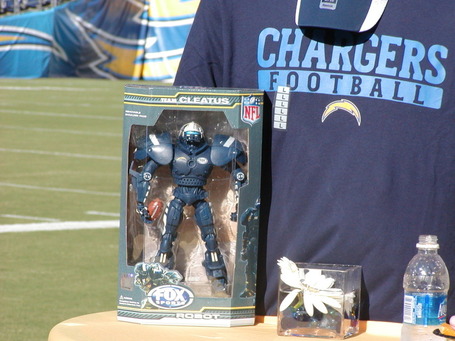 Charger version of Cleatus. You know you want it. 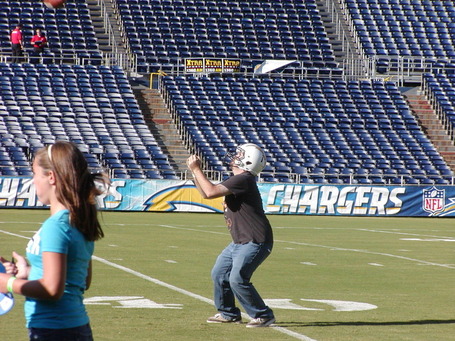 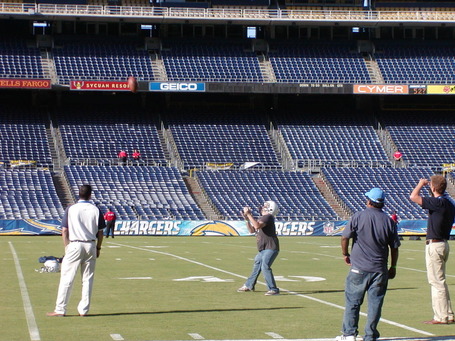 John shows Jeremy Williams how to catch a punt (I pick on #86 since he dropped one in practice later). These are his two attempts. He caught both. I was proud of myself for getting the football in both shots. The first one barely has it in there and the second is camouflaged by the Sycuan Resort sign. I did this on purpose because I'm an artist and it's my metaphor for life's imperfections. 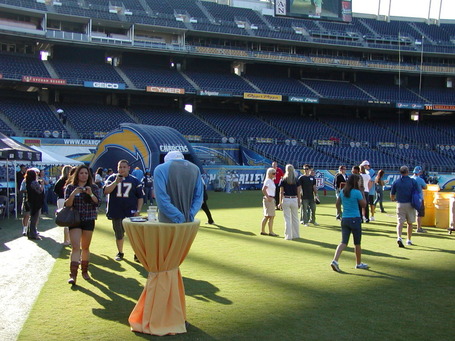 The crowd was starting to fill in. This means two things: 1. Time to start looking for more people we recognize and 2. Less free food and booze for us. Time for a refill and get grub before its gone. We were tempted by a nice display of meatballs and were lured in by some fresh fruit, but the gold at the end of the rainbow was the filet mignon steak sandwiches. Yum. I also grabbed a mini hot dog. Sorry, no pics, it was gone too fast. 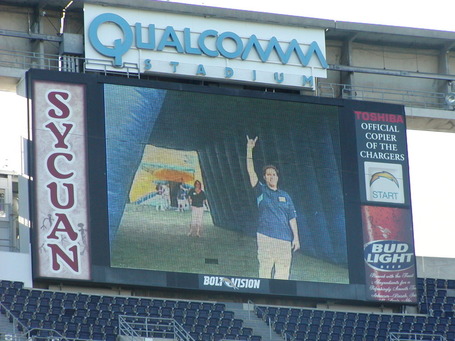 They had a camera shooting the air mattress tunnel entrance and relaying it to the big screens. Some guy was up there looking like a total tool.

Norv showed up soon after probably wanting to party with that guy up on the jumbotron. John wanted to say hi and get a picture, but we had to wait our turn behind the big shots. 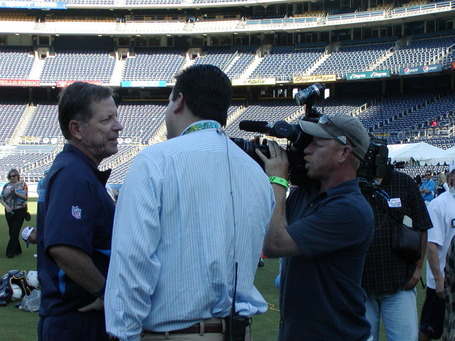 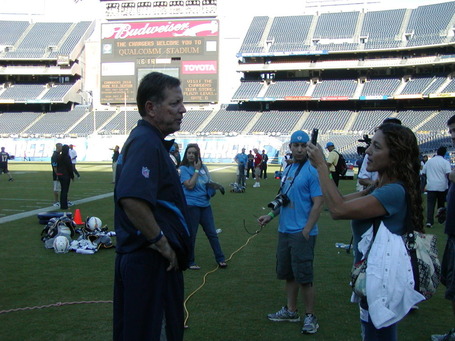 Even after patiently waiting for those two to finish, we still didn't get to Norv because another TV interviewer wanted him. Big timed. Oh well. 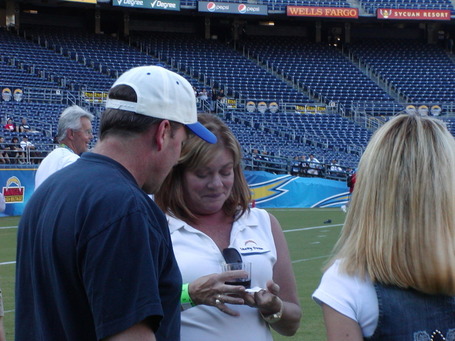 Hey, look, Shelly from DSC (That one's for you Creanium). 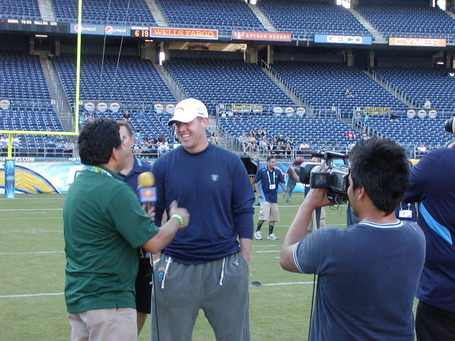 I snapped a picture of Scifres yucking it up with the media before my camera decided it had enough and took its own life. Luckily I was able to do an autopsy and get the pictures out when I got home.

John and I hung out for a bit longer, but they were starting to pack up the food and booze. We found a secret spot to get more booze, free cookies and snag some magnet schedules before skedaddling up to the West End Zone seats to watch the post-party practice. As soon as we got up there we saw ol' Kevin Acee show up. He's all business. jkvandal joined us a little later after John proclaimed he was drunk with power and anyone who wanted to visit would have to come to him. We played "Where's the Silver Fox?" a few times as Acee kept disappearing, but was still tweeting about the practice. Other than laughing and crying at tweets about the Padres game (Chris Denorfia in particular) we just sat and watched practice. And then once the first team got done we got out of there.