Share All sharing options for: Philip Rivers and Nick Hardwick on the Cover of This Month's Sports Illustrated

With the NFL season a mere 9 days away, Sports Illustrated has their NFL Preview double-issue ready to hit newsstands tomorrow.  Gracing the cover is our very own Philip Rivers and Nick Hardwick. 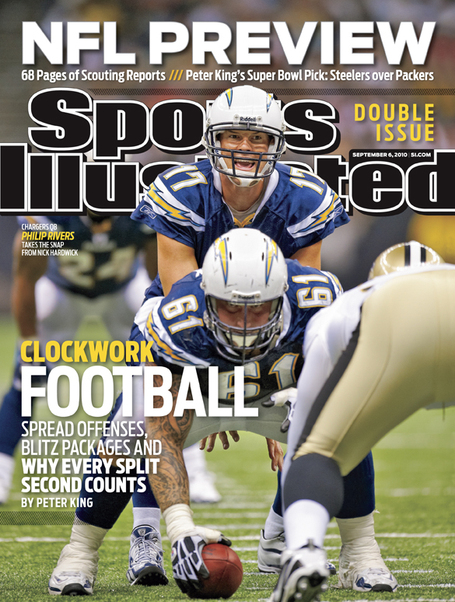 In the issue, Sports Illustrated offers more than just the eye candy you see above, they also provide previews and preditctions for all 32 NFL teams of the forthcoming 2010 NFL Season.

Sports Illustrated's Jim Trotter previews the entire AFC West for the magazine, including the Chargers.  He predicts the Chargers will take the division again this year, thanks to a talented group of players and the 3rd-easiest schedule in the league.  The Chargers play in one of the weakest divisions in the NFL, and play against all four NFC West teams this season, arguably the worst division in the NFL.

One of my favorite parts from the article:

They won two playoff games in Turner’s first season, one in his second and none last year. Something needed to change, and by jettisoning Tomlinson, a former league MVP who was the face of the franchise, the organization believes quarterback Philip Rivers will be able to fully spread his wings.

Plenty more great stuff to read in the September issue of Sports Illustrated, so pick it up when it hits newsstands tomorrow.  You can tell all your friends you bought it for the articles, but it's okay, we here at BFTB know the real reason you picked it up.  Don't worry, your secret is safe with us.