Share All sharing options for: Fantasy Studs on the San Diego Chargers

Even without Vincent Jackson and Marcus McNeill (I'm getting tired of starting sentences that way...), the Chargers are heading into 2010 as a "Super Bowl contender" yet again and are stacked at nearly every position. For the ones that matter for fantasy football players (QB, RB, WR, TE, K, DEF/ST), this San Diego squad continues to rank very highly and will have players towards the top of every fantasy football draft board. Let's take a look at who they are, and why you should keep an eye on them when you're drafting.

The good news, for people looking to pick El Capitan up in their fantasy football draft, is that Philip has been consistent and has added to his yardage total each of the past two seasons. The bad news is that he needed to do that to pick up the 1,000 or so yards that the rushing game was no longer producing....but might be again in 2010. This makes him a bit of a risk.

Either way you cut it, Philip is a safe pick. He'll probably finish the season as a top 5-10 fantasy QB, but he probably won't finish first because that requires an offense that focuses on passing before running and spreads 3-4 WRs out on every play. There are better options elsewhere, but this is definitely one of the safest picks you could make. 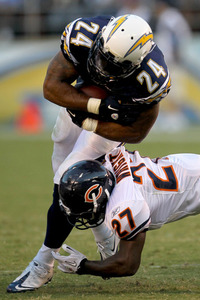 This sticks out to me because I have a few friends that are Giants fans, so it's a team that I'm almost forced to half-follow. When Tiki Barber was struggling to keep from fumbling the football, they changed his running style so that he was hugging the ball like young Bam Bam is doing in the image above. Almost instantly, his fumblitis went away and was never really and issue for the rest of his career. I'm glad this is something Ryan's already comfortable doing, and it helps to explain how he never once fumbled the ball in three years at Fresno State (Author's Note: it's been pointed out by Wonko in the comments below that Mathews had at least once fumble in the final game of his senior season, so consider my count of "zero" to be incorrect).

When LT was in his prime as the Chargers' RB (2002-2007), it was understood that most of his runs were going to the left-side of the line behind Pro Bowlers Marcus McNeill, Kris Dielman and Nick Hardwick. Those three players were still blocking for him when his numbers suddenly disappeared in 2008 and 2009. This is the biggest reason, amongst many, that I think the issue with last year's running game had a lot more to do with LT than it did the offensive line.

In addition to that, the fact that LT did well in short-yardage situations but couldn't break any big runs showed me that the line was getting the same push but Tomlinson wasn't able to do those same things he used to to create big plays with his legs. I happen to believe this is still one of the better run-blocking lines in the league, and even though he had his issues LT tied for 5th in the league with 12 rushing TDs last season (also showing that Norv loves punching it into the end zone with his RBs).

Like all rookies, there is a risk-reward proposition to drafting Ryan Mathews, but with each good preseason showing he is skyrocketing up fantasy football draft boards and will almost assuredly be taken early in your own draft.

Malcom Floyd (aka Spiderman) - 45 catches, 776 yards, 1 TD in 2009
Like a lot of players on this team, Malcom is a guy that can tell me if a Chargers fan is an optimist or a pessimist. Let me present the two arguments, with a focus on fantasy football.

OPTIMIST: Malcom has been doubted his entire career and continues to prove the doubters wrong. He went undrafted and eventually worked his way from the practice squad all the way to a spot as a starting WR on the team. In 2008, when he was given his first chance to get on the field as the team's slot receiver, he showed himself to be a polished WR with great hands and unexpected speed downfield. In 2009, he looked like he was even better for the experience and eventually forced the team to release under-performing Chris Chambers to open up a starting spot for him.

What's to say Malcom stops getting better now? He matched Vincent Jackson's 17.2 yards per catch in 2009, and had an almost identical catch rate (VJ - 63%, MF - 59%). If he is even better for the starting experience last year, and the time spent lining up against Quentin Jammer in practice this year, it's not impossible to expect him to give the team VJ-like production from the #1 receiver spot.

PESSIMIST: Anything Malcom showed in 2009 had to do with him being the 3rd or 4th option on the team. He hardly ever went up against the shutdown corner's he'll be facing in 2010, and his skinny frame is going to be put to the test against some of the most physical CBs in the game. His production will most likely drop-off from 2010, as he's not a real #1 WR, and Legedu Naanee probably won't be able to put up the same numbers from Floyd's old spot as the #2 WR.

Even though they put up similar numbers before becoming starters, and had similar numbers in 2009, VJ did it against stiffer competition and Floyd didn't have the same number of touchdown catches as Jackson. Not having VJ is going to severely hinder the red zone offense.

Antonio Gates - 1,157 yards, 8 TDs in 2009
Gatesy led all TEs in receiving yards in 2009 and tied for 4th with 8 touchdown catches. All signs point to Antonio getting better as he gets older (as long as he's healthy), and also taking advantage when the offense around him is better. Even without Jackson, the addition of a solid running game could (somehow) make Antonio even better in 2010. He should be the 1st or 2nd TE taken in every fantasy football draft.

Nate Kaeding - 32/35 FGs, 50/51 XPs in 2009
32 made Field Goals tied him for 1st with David Akers of the Philadelphia Eagles. 50 made extra point tries tied him for second with New Orleans' John Carney(!), and making 91% of his Field Goal tries made him the 4th most accurate kicker in the league. Say what you want about trusting Nate in the playoffs, when it comes to fantasy football he might just be the best kicker in the league.

There is still one spot open in the BFTB Fantasy Football League and you'll have your chance to claim it as your own next week. If you'd rather not compete for this spot or against the BFTB staff/community, feel free to sign up for your own CBSSports.com's Fantasy Football Commissioner League and get 50% off (and a free 14-day trial!) by clicking here. What you'll be getting is not just the best Fantasy Football system on the internet (Most awarded League Manager by the Fantasy Sports Trade Association), but weekly scouting reports, advice, live score-tracking and the ability to get all of your fantasy football questions answered by experts.

Disclosure: CBSSports.com is an SB Nation partner and paying sponsor of the SB Nation football communities. This post is one of a series of sponsor-endorsed posts related to the CBSSports.com Fantasy Football Commissioner League.