Hard Wonks is my reality show about Chargers Training Camp. I started this series by mocking up a reality segment about the defensive backs and then I continued it by doing the same for wide receivers. Some of the drama has started to happen at those two groups already. Darrell Stuckey, the rookie, was listed on the Chargers latest depth chart as the starter at safety, but he's been dinged up to the point where he's had trouble getting on the practice field. Steve Gregory is seeing the reps that Stuckey would be getting. Paul Oliver has been working his tail off and is beginning to look like a lock for Eric Weddle's backup. At cornerback Traye Simmons is pushing those vets and retweeting things about  Traye Simmons Island being better than Revis Island, while Antoine Cason battles his own injury issues while still hanging on to the starting job. Josh Reed, the veteran free agent acquisition to the wide receiver corps, can't be happy about his 3rd string location on the depth chart. The wide receiver group also saw its first roster cut as Ernest Smith was released from the Chargers. The plot is thickening at Chargers Park in Murphy Canyon so let's see what's up with our final look at a positional group.

My mission statement remains the same. I'm looking at the same camp battles that everyone talks about because that where stuff gets real. And I'm now down to last of three position groups I teased in Part 1 that have distinct similarities. As a refresher here's what they are again. First, they've all had a former Pro Bowl player leave or hold out. Second, and this kind of goes along with the first, they all have openings at key positions. Third, we have too many of them with decent chances of making the roster. The first point is what shines the spotlight in its direction. The second point makes the these position groups mean something once the season start. And the third point brings what we all want to hear about in training camp: Drama.

Today we focus on the drama of the Defensive Line.

Defensive Line in the 3-4 defense is the blue collar job of the NFL. Rarely do you see these guys on highlight reels or on Pro Bowl teams. They don't get a lot of sacks and many times their work in the run game manifests itself as a tackle by a linebacker, but nevertheless they work hard to make defenses go. The 3-4 may only have 3 linemen on the field at once but, unless those 3 are the most amazing athletes in the word, a rotation is needed to keep everyone fresh. The needs to be at least 2 deep at each of the 3 spots with guys that will see the field in every game and then have a couple more backups just for injury insurance and to fill in during practices since a lot of times these guys will get banged up enough to miss practices. A couple might be asked to do some kick return duties, but as they are accustomed to, they'll do work that doesn't end up on SportsCenter. Let's give 'em some love today.

Jamal Williams: We'll refer to JWall as the former heart and soul of the Chargers defense. A massive man who actually had his run stopping plays catch the eye of football announcers. He made Pro Bowls and was loved by die hard Charger fans. We'll show lots of the highlight reel plays of goal line stands, big hits and the jovial celebrations of the man mountain. We'll end with how he's been an injury concern for a number of years and even missed all of last season. Then, we show him in blue and orange and mention that, barring injury, he'll get a chance to terrorize his old team twice a season.

Ian Scott: Quick mention for Ian Scott who played with Defensive Coordinator Rivera on a few Chicago Bears teams and provided some help to the makeshift 2009 defensive line. His departure can be chalked up to the Chargers desire to get a little younger at the position.

Luis Castillo: We'll cut from some Castillo sack footage with $100 bills raining around him to a shot of him on the trainers table grimacing. That basically sums up his career with the blue and gold. He earned a big paycheck with the promise of perhaps turning into the next Aaron Smith or Richard Seymour, but instead he constantly battles injury and shows signs of that player the Chargers hoped to get in the rare moments when he's completely healthy. His starting job for 2010 is assured, but nobody is entirely happy about his situation.

Jacques Cesaire: The wily vet makes his way through practice yucking it up and hitting fools. Jacques Cesaire is one of the longest tenured Chargers since being signed as an undrafted free agent from Southern Connecticut State in 2003. Jacques Cesaire had an off-the-field scare last season right before the Chargers playoff game when a big earthquake hit Haiti. Cesaire is of Haitian descent and has relatives on the island. All were safe and Jacques tried to help the residents of Haiti by teaming up with other NFL players to do PSAs for the relief effort. The old timer will try to fight off father time another year and either continue as a starting defensive end or provide veteran insurance as a backup.

Antonio Garay: Garay is new to many Chargers fans, but he's been around in the NFL for a while. He was originally drafted by the Cleveland Browns back in 2003 and played for Ron Rivera on the 2006 NFC Champion Chicago Bears. The Chargers signed him off of the New York Jets' practice squad last year as a way to help with their depth issues because of injuries. This year he's already been listed on their depth chart as the starting defensive tackle. Better late than never, I suppose. It's a good story if this journeyman can anchor the defensive line for a playoff contender.

Alfonso Boone: Another lineman for Defensive Coordinator Ron Rivera's Bears days. He's a guy with a strong motor and a nose for getting to the ball carrier in the run game. He continues our defensive line theme of blue collar guys. He's unheralded, but a key part of a defensive line rotation that the Chargers are relying on.

Travis Johnson: Big dreams and big money is how Johnson came into the NFL as a 1st round draft pick out of Florida State. Those big dreams soon faded, at least for his former team the Houston Texans, when he turned out to be injury prone and not the star they thought he'd be. A change of scenery brought him back to his home state of California, but not much has changed. We'll see if we can get Travis to tell us some jokes and talk about his beloved little girl Zoe's battle after a stroke while we tie him in with all the other unheralded big men on the line.

Ogemdi Nwagbuo: The San Diegan with the African name. We'll follow him around his old stomping grounds for a bit and tell his story of how he was a porter at the airport before realizing his dream to become a Charger. Fan to field stories are a great way to reel the audience in. He's going to need to continue work hard at his dream again this season in order to carve a niche for himself in this crowded defensive line.

Vaughn Martin: So, you're going to be a football player, eh? This Canadian has the backing of the Chargers front office, but there's still a lot of polishing to do on this diamond in the rough. He hasn't quite cracked the first or second team, but there's potential here. His dominance in the Oklahoma drill should make for some good shots while we introduce him.

Ryon Bingham: We can show Ryon working hard in rehab and then taking reps in practice. His story is about being a practice squad guy, to a guy in the defensive line rotation a few years, to a guy who was supposed to fight for a starting spot last year, to a guy on IR for a full season and finally to the guy in training camp this year just fighting for a spot on this roster.

Derrick Jones: I'm not sure whether we use Jones or not. Our HBO counterpart likes to follow some former practice squad guys just enough to see the emotion when they get cut. I'm not sure that I want to be quite the emotional vulture like that. But, I will wish Jones good luck.

Cam Thomas: It might be interesting to put up a list of all the internet sites that had Cam Thomas going well before the 5th round. We can also talk to Directory of College Scouting John Spanos about what they like about this guy and why they had to wait until the 5th round to take him. We'll point out how he's wearing the same number as Jamal Williams and say that comes with a certain level of expectation. Hopefully we'll get a good quote from him about how he's going to live up to those expectations. We'll finish with a Godzilla scream noise and this picture: 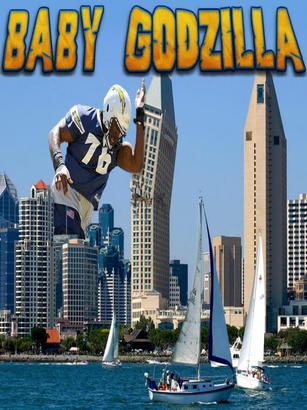 With my reality show producer's hat off and my GM hat back on, here's who I have making the team (with a little help from that recently release depth chart). Who do you have?